What if? (Grammar school entrance)

What if he doesn’t get the marks?

What if he doesn’t get the school?

What if he doesn’t get his second choice school?

What if he doesn’t get into his brother’s comprehensive?

What if plan C has to become plan A?

What is plan D and plan E?

It’s a few days now until we (hopefully) get some answers. If he comes out in the top 120, everything is fine. I’m not sure how many people sat the grammar school entrance exam in Gloucestershire – probably in the low thousands. The top 120 are automatically eligible to get into our first choice school (which just happens to be a couple of miles down the road from us), although not all of them will take it. Some of them will opt for one of the other six grammar schools in the county, which are closer to their homes. So anyone in the top 160 stands a chance of getting in and should make it their first choice on their application form.

There is only one other grammar school we would send our son to – the others are either too far away or girls’ grammars! It is a good school and I would be very happy for him to go there, but I can’t get rid of this nagging feeling that his destiny is with the ‘top’ grammar. Will I be disappointed if he doesn’t get in there? If I’m honest, yes I probably will.

And then there’s plan C – his brother’s comprehensive. It’s a very good school – I even went there myself. But my son is not a comprehensive kind of kid. While grammar schools exist in our area (and I know many people disagree with them), a child of my son’s ability needs to be there. My eldest has started mucking around a bit and mocking authority (I don’t think he’s brave enough to actually do it at school, but he admires that sort of behaviour in others and replicates it at home). This would be totally out of character for my younger son, but if he goes to a comprehensive, will he end up doing the same?

Then there’s plan D. There is no plan D.

If my son doesn’t get into grammar school and his brother’s comprehensive becomes plan A, there is no second choice for us. (Sadly there is no preference for siblings to get into the school.) There was another comprehensive which would have suited my eldest – half the size of his school and rewards the kind of slightly-above-average kids who usually sail under the radar un-noticed. Kids like my eldest. He would have thrived there. But it’s not a suitable environment for my high-achieving younger son.

I’ve heard it all before: It doesn’t matter. He’ll do well wherever he goes.

But it does matter. Yes, he’d do well at comprehensive, but he’ll do better at grammar. He will fly there – surrounded by people who want to learn and teaching at his own level. He has so much potential and to fulfil that potential, he needs to be at grammar school.

So we just have to wait and hope. Hope that he really did as well in the test as he thought he had. 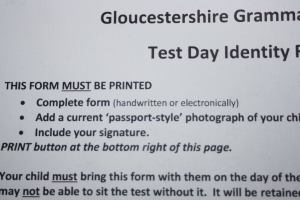