After two doses of medicine accompanied by stress and tears, and knowing we had another 28 doses to get through, we needed to do something differently. So we gave my daughter a straw so she could get the medicine straight to the back of her throat without touching her tongue and hopefully it wouldn’t taste as bad. We managed a 15 minute dose of medicine with no tears! Result!
After that, the doses slowly crept back up to 20 or 25 minutes. There was a toilet trip every time, a lot of chatter and a little ballet interlude, all in the name of distraction and procrastination. She insisted she take the medicine in the bathroom ‘in case I’m sick’ (she wasn’t going to be sick). There was a glass of water to sip between doses and a wine gum ripped into tiny pieces for after each sip. She would suck at the straw for ages, yet it would appear the liquid hadn’t gone down at all. You could see her building up to it on her face, then there would be a deep breath and she would start sucking. It wasn’t that different from watching celebrities eating bugs on I’m a Celebrity.
After the stress of the first two doses, to get to this point, with no tears and only a little bit of gagging was a great relief. Seeing the movement of her throat and hearing the sound of the medicine go down was a beautiful thing – it reminded me of when I listened to the sound of my newborn baby boy feeding after he hadn’t fed for three days.
But we didn’t just have to conquer the medicine, we had to conquer the diet. And it had to be a permanent change. My daughter had two problems – not enough fruit and vegetables and not enough to drink. She struggles with both, but she was determined to crack it – her biggest fear was that she would have to go up to three or four doses of medicine a day or that she would have to stay on it after she’s seen the doctor again in a few weeks.
The only drinks you can guarantee my daughter will have in a day are orange juice with breakfast and at bedtime. She usually has a carton of smoothie after school and drinks about half a cup of apple juice with her tea. She never drinks her water at school, because she doesn’t like it. Although an added advantage of the medicine she hates has been that she’s been starting to enjoy the water she is drinking between doses to wash it down. So now we’re making drinks available more often and nagging her to finish them. She managed seven drinks on her second day on the medicine!
The fruit and vegetables are more difficult, but I had started giving her a banana after school a few months ago. She would eat it fine, but it was too easy to forget it in the school holidays and at weekends. She now realises she has to eat it every day. Sometimes if we’re out, she may end up eating it in the early evening, but the important thing is not to forget. 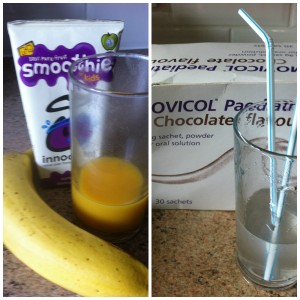 My husband is now on board with all of this too, which makes life a lot easier. Although he won’t let the kids eat crap all the time, he does tend to think of me as being pointlessly obsessed with healthy eating. I’m not obsessed with healthy eating, but I do like my kids to have a balanced diet – and this has proved to us exactly why they need it. Even though I talk about eating five-a-day and drinking enough, I never really believed it would affect their health at such a young age. Now I know it does, we’re all going to take it a lot more seriously.
The stomach aches stopped the day after my daughter started on the medicine and she’s going to the toilet every day (which she wasn’t before), so I’m really hoping she will be back to normal by the time we see the doctor again.