My daughter has been suffering from bedtime tummy aches for about a year now. When she has a tummy ache, she eventually falls asleep, then sleeps the whole night and wakes up perfectly fine. When, after tummy aches for three consecutive nights, she woke up not fine, I switched my plans from ‘see the doctor after our holiday’ to ‘see the doctor NOW’.

I’d noticed she’d been weeing rather a lot, which was unusual, and wondered if she had a urine infection. So we got a rare and precious triage appointment at the doctor’s. When he said her wee showed no sign of infection, I expected to be sent home with a small paranoid mother flea in my ear. Then I would slightly tell my daughter off for over-dramatising tummy aches and we would all go on with our lives.

The doctor checked her tummy very thoroughly. He poked and pressed and prodded for what seemed like five minutes.

He’d found something. A blocked bowel. My poor daughter was chronically constipated.

She’d been managing to go to the toilet, but something wasn’t shifting. And it needed to shift.

My daughter’s diet is bad. We try, we really do. But she’s just so fussy and she seems to be getting more fussy the older she gets. She is a terror for chocolate, cakes and ice creams. She likes sausage rolls and pasties and pizzas. She DOESN’T like fruit and veg. (For the record, she doesn’t get these things all the time, but she tries constantly, just in case we’ve got our guards down and will accidentally say ‘yes, of course you can have the sausage roll then the ice cream for lunch’.)

Her five-a-day (which doesn’t actually make it to five) comes in the form of juice – orange juice, apple juice and Innocent smoothies. Yes, they’re expensive, but getting her to drink enough and eat healthily is an ongoing battle, so they’re worth every penny.

‘Well I could give her some medicine – or prune juice?’

‘Whatever tastes the best.’

Because if there’s one thing my daughter is worse at than eating, it’s taking medicine. This is the child who, aged 3 and ill enough to have been sent by the GP to hospital for observation, managed to fight four grown women (me, my mum and two nurses) who were trying to hold her still to give her Calpol. Yes, Calpol. The medicine every kid under the sun loves.

My daughter’s face lit up.

Apparently the medicine she needed came in chocolate variety. Win!

On the way to the chemist, we talked about the medicine. It was a powder we had to mix with water. Just a quarter of a glass. A small drink – and it would taste like chocolate milkshake or hot chocolate. What could possibly go wrong?

She was fine until I started tearing open the packet. Then the tears fell. Great big, fat tears full of terror and sadness. The sort of tears that would break your heart.

I mixed the tiny little medicine drink and we sat down. She was shaking with fear and crying uncontrollably. She had the smallest sip and gagged. She washed it down with water. Another sip. More tears. More water. She had a biscuit to nibble. She put the TV on. She watched a whole programme. She stopped twice to go to the toilet.

It was breaking my heart as much as it was breaking hers. I hate to see her so upset. But we couldn’t stop because how else was she going to get better? All these years of not eating enough fruit and vegetables and not drinking enough have finally taken their toll. As we warned her they would, whilst simultaneously believing they wouldn’t.

It took over half an hour to drink the medicine. Medicine she should have just knocked back in one or two gulps. Every sip was prolonging the agony, every second she held it in her mouth instead of swallowing was making it worse. 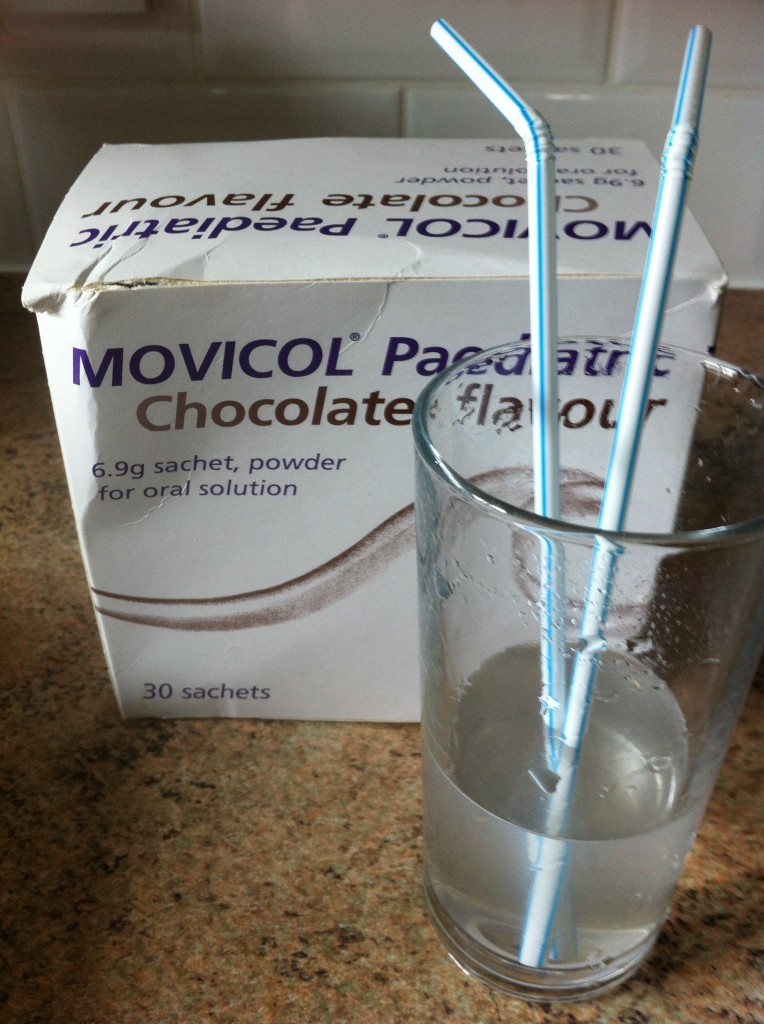 I felt drained and out of sorts for the rest of the day.

And in the evening we had to do it over again. My husband thought he’d manage it with good advice and being all upbeat and motivational, rather than ‘mollycoddling’ her, as I get accused of. I left him to it. But then her cries got too much. She clung onto me for dear life. The tears were pouring down her face and she was shaking and gasping. It took over half an hour again to drink a quarter of a glass of liquid that smells like Coco Pops. How bad can it be?

There were 30 sachets in the box. I knew she had to get through all of them. And if the tummy aches didn’t improve, she would have to go up to three or four sachets a day.

I don’t know why she reacts in the extreme way she does and I don’t know how to help her. Nothing seems to work – not talking calmly, not being upbeat, not being sympathetic, not getting cross. I don’t want her to hate me for giving her the medicine. She’s old enough to understand why she needs it, yet it seems she’s not old enough to just accept it, stay calm and get on with it.

Does anyone else’s older child behave in this extreme way? Does anyone have any advice on how to deal with it?