The Levellers at Wychwood Festival

I realised I couldn’t squeeze The Levellers into my Wychwood Festival post and do them justice. They’re my favourite band! They deserve their very own post.

We thought we’d aim for the patch of mud near the front, where we’d watched Bad Manners, to watch The Levellers. My husband thought that might be a bit optimistic, but actually there was plenty of room for us. In fact, we were able to go slightly further forward – kids and all. We had both our boys, plus my younger son’s best friend and another friend from his class. My daughter had decided to stay on the picnic rug with Grandma and Grandpa.

The Levellers kicked off with England My Home. There’s not many bands that would open a show with a track of their first album from nearly 25 years ago, that wasn’t even the lead track from that album. But this is The Levellers. They have so many songs and they’re all brilliant. They can kick off with whatever they like.

I started dancing in my usual crazy way, because that’s just what I do. The kids don’t like it, but I’ve been watching The Levellers for way longer than I’ve been a mum and that’s how I dance. Anyway, I was pleased to see that my son’s friend’s mum, who was right in front of us, was dancing just how I dance. It was noticeable though that, as this was a festival and not a Levellers concert, there were generally less people dancing and certainly less people joining in the words.

The set skipped backwards and forwards through their back catalogue. They played 15 Years, one of their most popular songs, very early on.

‘It’s my second favourite song and they never play my favourite,’ I said.

They played their most famous song, One Way, only about a third of the way through the set. If you don’t know who The Levellers are and what they play, you would almost certainly play One Way. 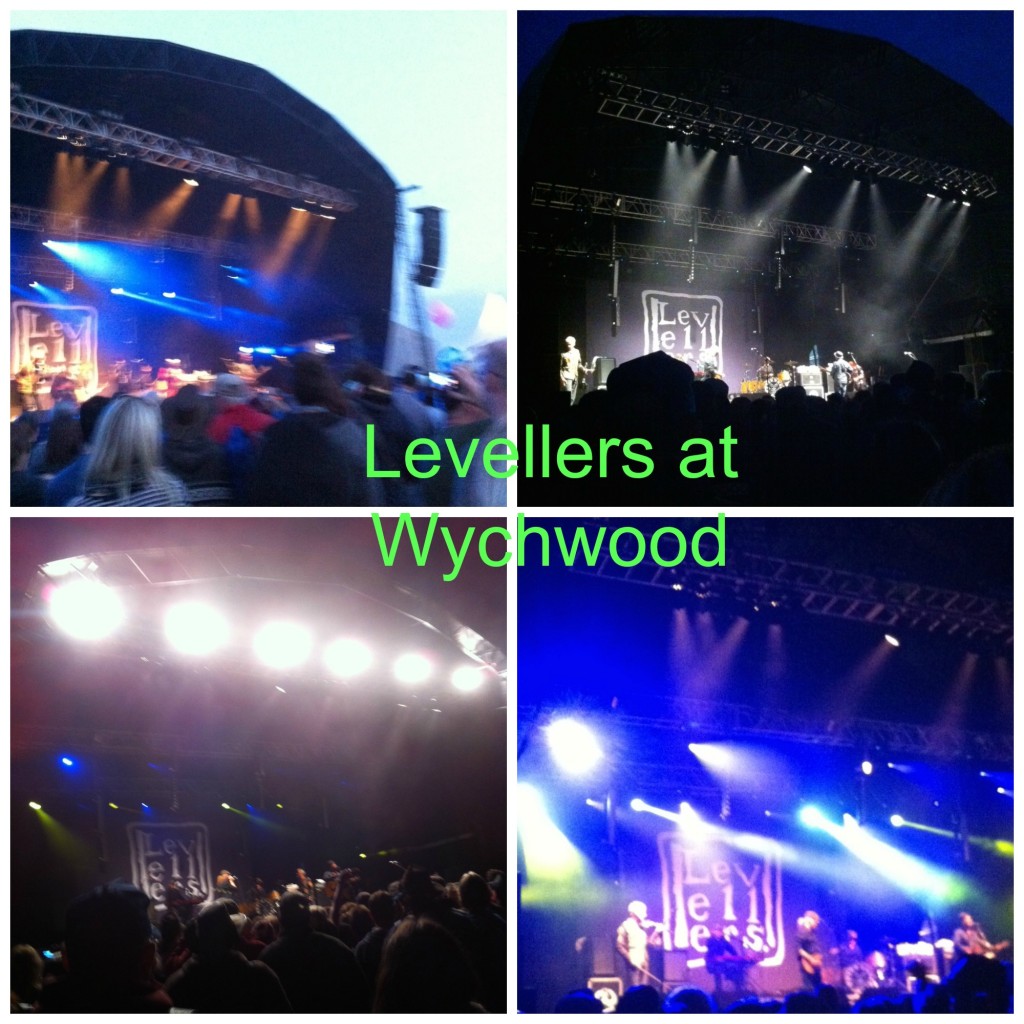 There was a snatch, of music, a pause, a longer pause. This never happens. What was that snatch of music? Julie? The Battle of the Beanfield?

‘Sorry about that, it’ll be worth it,’ said Mark, the lead singer.

And it totally was! The Likes of You and I! My favourite song. The song they never play. The song off their eponymous third album, which allegedly they never liked, so they gave up playing any live tracks from it almost immediately. It is such a beautiful song.

My husband had disappeared. Next time I looked round he was back with a big fluffy panda on his shoulders – my daughter had been unable to resist coming along and joining in the fun. The boys were variously dancing, pushing each other around, complaining that it was too loud and singing. I love that my eldest has adopted The Levellers as his favourite band too and knows lots of their songs.

Far From Home, Liberty Song, Dirty Davy, Sell Out, Belaruse, Another Man’s Cause… so many songs. I’ve already forgotten half of what they played, and which tracks they played in the encore. They played Carry Me, the first Levellers song I ever heard, in a club on a Monday night when I was 17. They asked the audience to sing along – it didn’t go that well seeing as the audience wasn’t made up of die-hard Levellers fans. For a scary moment it felt like I was the one to carry Carry Me and, believe me, my singing isn’t really up to that.

‘What are they doing now?’ said my eldest as they went off stage.

‘They’ve gone off, but they’ll be back on. We just have to cheer.’ So we did. There weren’t that many people that did. But they came back on anyway.

And then it was over. The kids had survived their first festival, my daughter had seen The Levellers for the first time, I’d danced in mud for the first time in nearly 20 years, and we’d all had a brilliant time. We’ll be back.