Here’s a few random bits and pieces about our recent trip to Barcelona. I’ll write about the places we visited in a separate post.

It’s hot in Spain, isn’t it? 25 or 26 degrees? Maybe even 28 or 30? Not when we went. We arrived in Barcelona to discover they were suffering from the same unseasonal weather we’ve been having in Britain.

Yes it was better than Britain. But their late May was like ours should be -18 to 20 degrees. Not what we’d packed for. My poor daughter had no trousers and no tights, just shorts and summer dresses.

So we soldiered bravely on like true Brits, wearing only shorts, Tshirts and goose pimples while the Spanish people wore COATS. 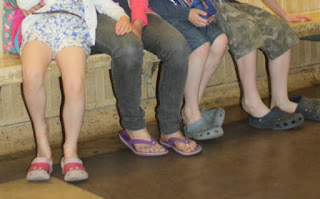 My friends are always lecturing me about food – about cooking more (aka not using Dolmio for every meal), about getting the kids to try more food and about being more adventurous in what I eat myself.

So they would probably kill me if I went to Spain and we didn’t try paella and tapas.

But this is easier said than done for a vegetarian (before I even start on the kids’ many food issues). You CAN get vegetarian paella in Barcelona, but only at those places with laminated pictures of the food that you know would feature in a Channel 4 documentary about environmental health officers if they were in Britain.

But my husband ate a big seafood paella and my younger son tried tapas, so we at least ticked those boxes as a family, even if I didn’t do it myself.

To be honest, I was impressed with the kids – my eldest ate vegetarian curry on the plane and my daughter ate some Thai chicken. These things would be unheard of usually. My eldest loves pasta, but won’t eat it cold. He managed a cold pasta salad (albeit from Starbucks and leaving out the olives and tomatoes). This might not sound like a big deal, but it’s real progress for us. 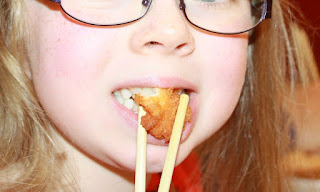 We stayed at a very pleasant 4 star hotel – K&K Picasso. Needless to say we had to have two rooms – a family of five is SO EXPENSIVE. But I got the long straw of sharing a room with my quiet, tidy little girl.

The hotel has a small swimming pool on the roof, which my kids braved every day in the 18 degree temperatures. Needless to say, the pool was very quiet.

There was one of those shoe polishing things outside our room and the boys ‘polished’ their Crocs every flipping time they left their room! Grrrr.

There’s a lovely attitude to children in Barcelona. Everywhere we went people looked at my kids and smiled, chatted to them and asked their names. There actually weren’t many kids around at all and I suppose my pale, fair-haired kids stood out, especially my daughter with her glasses and her extremely long hair. It didn’t feel creepy, but it would be considered inappropriate in Britain.

When my kids were running and jumping in the street, a man cheered them on, whereas people would tut and frown at home.

In just a few short days we became ‘locals’ at a noodle place, a grubby ‘supermarket’ or ‘supermeerkat’ as we called it (because that’s almost how it’s written in Spain) and especially the best coffee/ chocolate shop/ bakery in the world EVER. 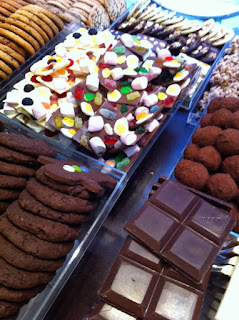 How delicious do these look?

On Tuesday my husband bought a coffee there. On Wednesday he bought a coffee and a biscuit. On Thursday he had a coffee and we all had a biscuit. They were so delicious we all went back on Friday and had another one. When we told the lady it was our last day she gave us all some extra biscuits to take away for free! So big up Demaisie Galete Exagaradment Bones in the Gothic quarter of Barcelona. This place comes highly recommended, not just for the freebies, but for the indescribable deliciousness of the biscuits!

Our biggest fail was not taking a tourist bus tour. This way you can hop on and off to visit Barcelona’s major attractions, you can glimpse the things you have neither the time nor the money to visit properly and you can get a real feel for how the city fits together. Some of our Metro treks followed by long walks could have been made a whole lot quicker and more pleasant by taking the tourist bus.

Mount Tibidabo has a fair on top of it. Alton Towers it ain’t, but we still expected to go on a ride or two. But when we got there, at 11.30am on a Thursday, it was closed. I don’t know if it opened later in the day or every day apart from Thursdays, but we weren’t going on any rides! Actually, we weren’t that bothered. It would have been more expense and even the kids were happy to have just
gone up there and enjoyed the views.

Barcelona is synonymous with Picasso. I loved Picasso as a teenager and really wanted to go to the Picasso museum, which was very close to our hotel. But I was in the minority. No-one else in the family wanted to go, so I sacrificed my Picasso fix in the interests of family unity.

Like all major European cities, Barcelona has its downsides.

Everyone I spoke to before we set off seemed to know someone who’d had their pocket picked in Barcelona. So at the last minute I did something I thought I’d never do. I bought a BUM BAG. I would totally understand if you decided never to speak to me again after that. It was a very slim one that fit under my Tshirt (even so, it looked like I’d gained half a stone on my tummy).

Smoking is everywhere (only outside) and it STINKS. You are never more than a metre away from a cigarette in Barcelona.

Toilets are VERY few and far between and when you eventually find one there will only be one cubicle and an extremely long queue. Oh, and the cleanliness and hygiene leaves a lot to be desired and there are no hooks for your bag. Bleurgh.

You get hassled by ‘salespeople’ (polite term) wherever you go. In Barcelona, unlike Britain, it seems to be fine for them to hassle kids too. While we were there they were mainly trying to flog things that make your voice go squeaky (why?!), so walking down La Ramblas that was all you could hear – incessant squeaking.

Many of the souvenir shops stocked rather rude Tshirts with English swear words and sexually explicit cartoons on them. Not what you want your kids to see when they’re looking for a Gaudi key ring for their best friend…

Have you ever been to Barcelona? What were the best bits and the worst? And now that we’ve finally got a little bit brave, where would you recommend we visit next?