Mother’s Day? We’d been looking forward to 30th March in our house for an entirely different reason. It was the day we’d been waiting for four months – the semi-finals and finals of the County Cup for the under 10s.

We all got up ridiculously early (even more so considering we’d just changed the clocks) and headed for Bristol. (Well, apart from my eldest who opted to stay in bed and then go round to Grandma’s.)

The ground was packed – five age groups, under 8s, 9s, 10s, 11s and 12s, for the semi-finals and finals of two competitions – the County Cup and the Plate. The County Cup is the big one, the Plate is a kind of runners up competition (but there are still many, many teams that don’t get near either).

We arrived just before 9.30 and the sun was shining. We heard the not-too-welcome news that the competition would be decided on a ‘silver try’ in the case of a draw – that means the team that scores first will go through. The boys had lost out to this rule in previous competitions.

The competition was due to start at 10.30, with our boys’ semi-final at 11. The team got training and warming up (and muddy), striking the delicate balance between getting ready and not getting too tired or injured.

Although it’s the County Cup for Gloucestershire, there were two Gloucestershire teams and two Bristol teams in the semis. We half-watched the first semi. You could see how much all of the kids had raised their game from their normally weekly matches. It was a really hard fought game, with the Gloucestershire team (a team we’d beaten decisively a few weeks ago) winning it 1-0.

Then it was our boys’ turn. I can safely say that I have NEVER felt as nervous, excited and hyped up for any of my kids’ sport before. As I saw my son stood on the wing and all his team-mates lined up, I could literally feel my heart beating out of my chest. This has never happened before.

It was a tough game. Our team are the best team around and they’re used to being able to get the ball and run with it, but they just weren’t getting the space. The game seemed to be played almost entirely on the ground with boys fighting for the ball, usually until one of them did something wrong and the ref blew the whistle and the game could open up a bit. 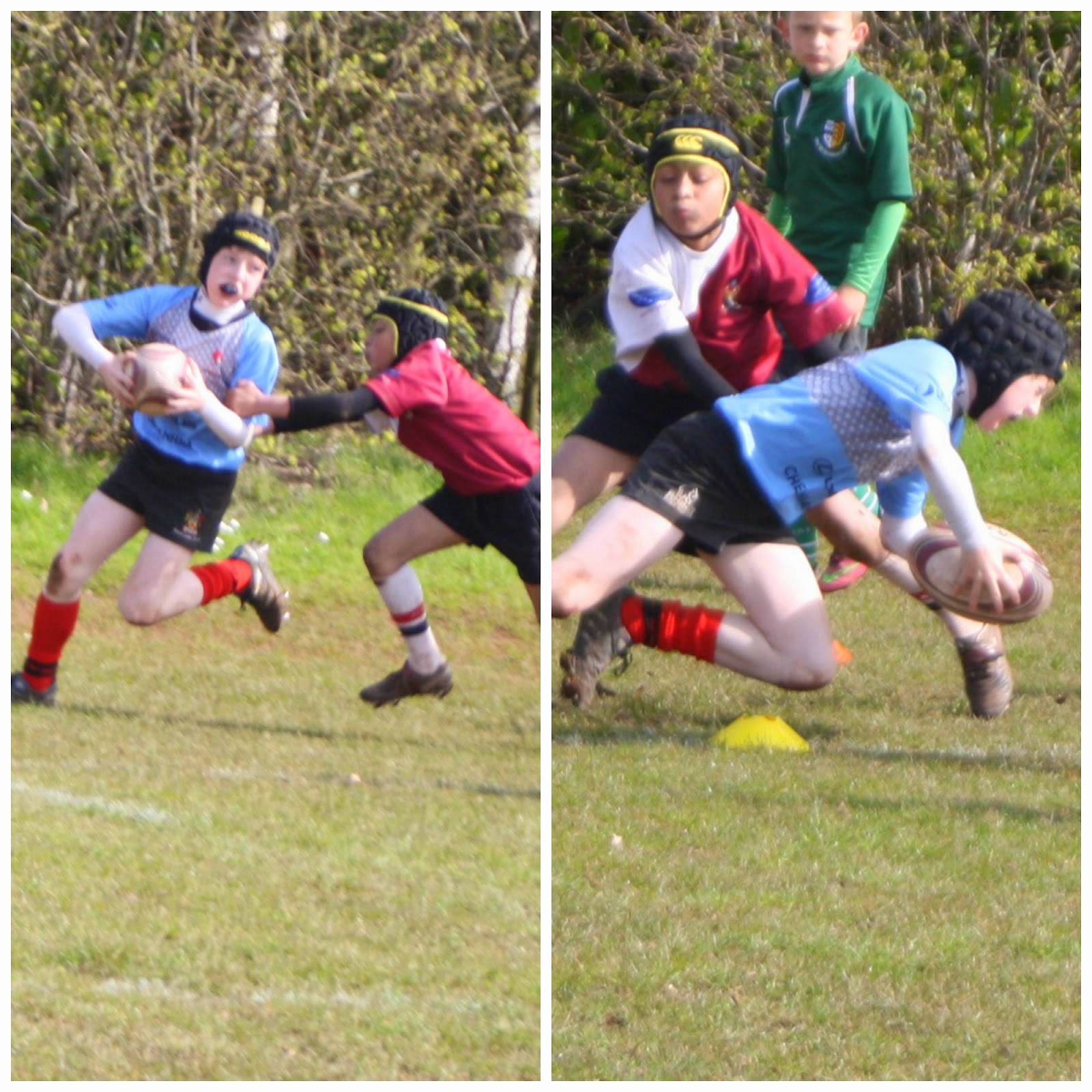 But eventually they got the space they needed – and they scored the first try! The priceless silver try -worth its weight in gold.

The parents shouted and screamed on the touchline. Seriously, I don’t recognise my rugby mum persona. I don’t know where it comes from. It’s even weirder that, even though I love going to rugby and watching my son play, I STILL don’t know anything more than the most basic of rules. I have no idea why they go to a scrum, what a ruck is and why the ball goes ‘into touch’.

The opposition scored, but it was OK. We still had the silver try. We just couldn’t let them get in front.

My son plays on the wing and sometimes he hardly sees the ball, as he’s on the very outside of the line. But he was seeing a lot of action in this game. He always frightens me when he goes in for a tackle as he’s not the best at it and rarely commits 100%. But his tackling was good and he was getting a lot of the ball. The opposition were so tough, his team had no choice but to pass the ball out to the wing.

He ran with the ball. He ran a long way. He was so close to the try line.

But he got tackled. Then they got the ball back straight away and my son had it again. He was even closer to the try line. Surely he would score?

Well, he didn’t, but the team did. He was absolutely instrumental in that try. 2-1 at half-time and with the all-important silver try. Now they just had to hang on.

We have a squad of about 15 players now, with nine on the pitch. Usually my son gets taken off at half-time for one of the other players to get a go. I was so pleased that the coach kept him on. In fact, he only made one change part of the way through the second half. The big day you’ve dreamed of and worked towards all season is not the day for giving all your players a run out, it’s a day for your absolute strongest players.

There was just one try in the second half – and it went to the opposition. But it didn’t matter, we had the silver try! The hated silver try rule had worked in our favour.

There was the play-off for 3rd and 4th place, before the final against the other Gloucestershire team. One of the kids had got injured in training between matches, but apart from that the coach played an unchanged team. My boy was back on.

Halfway through the first half, the opposition scored. They’d got the all-important silver try. Now we had to fight even harder. The parents yelled, the players played their socks off. There was still time. Still time to score two.

But suddenly the fighting paid off, our boys got the break they needed. It wasn’t easy, but they scored!

Surely there was time for another? It was 10 minutes each half. Every half of both games seemed like the longest 10 minutes ever. Apart from the second half of the final. Seemingly within seconds, the whistle blew for full-time. The dream was over.

As the opposition erupted in cheers and excitement, our boys collapsed and faded. There were tears from boys and parents alike. One boy had an asthma attack, another could barely stand because of a knock to the head and my boy walked off on his own, with tears in his eyes, and hid in some trees.

He was devastated. He didn’t want to talk to anyone or see anyone. He felt the rule was unfair as they hadn’t actually lost and there had been ref’s decisions during the final which he’d felt were wrong and could have changed the course of the game.

My husband went after him. Why was he so upset? Wasn’t he used to losing from football? (They basically lose every week.) No, he wasn’t used to it, because this was rugby and they win every week in rugby.

He wanted to go straight home, but we persuaded him to stay on and pick up his runner’s up medal. Losing in the final, particularly in such a cruel way hadn’t been easy. But actually there was a lot we could still be proud of and a lot we could take away from it:

They’d come second in the whole competition, second out of all of the teams in the county and even further afield (because last time I checked Bristol wasn’t actually in Gloucestershire).

My son had played every minute of the two games – and he’d played really well.

So even though things didn’t go quite to plan, I was still so proud of my boy, his team and the coaches for all they had achieved. And maybe next year they can go just one further! 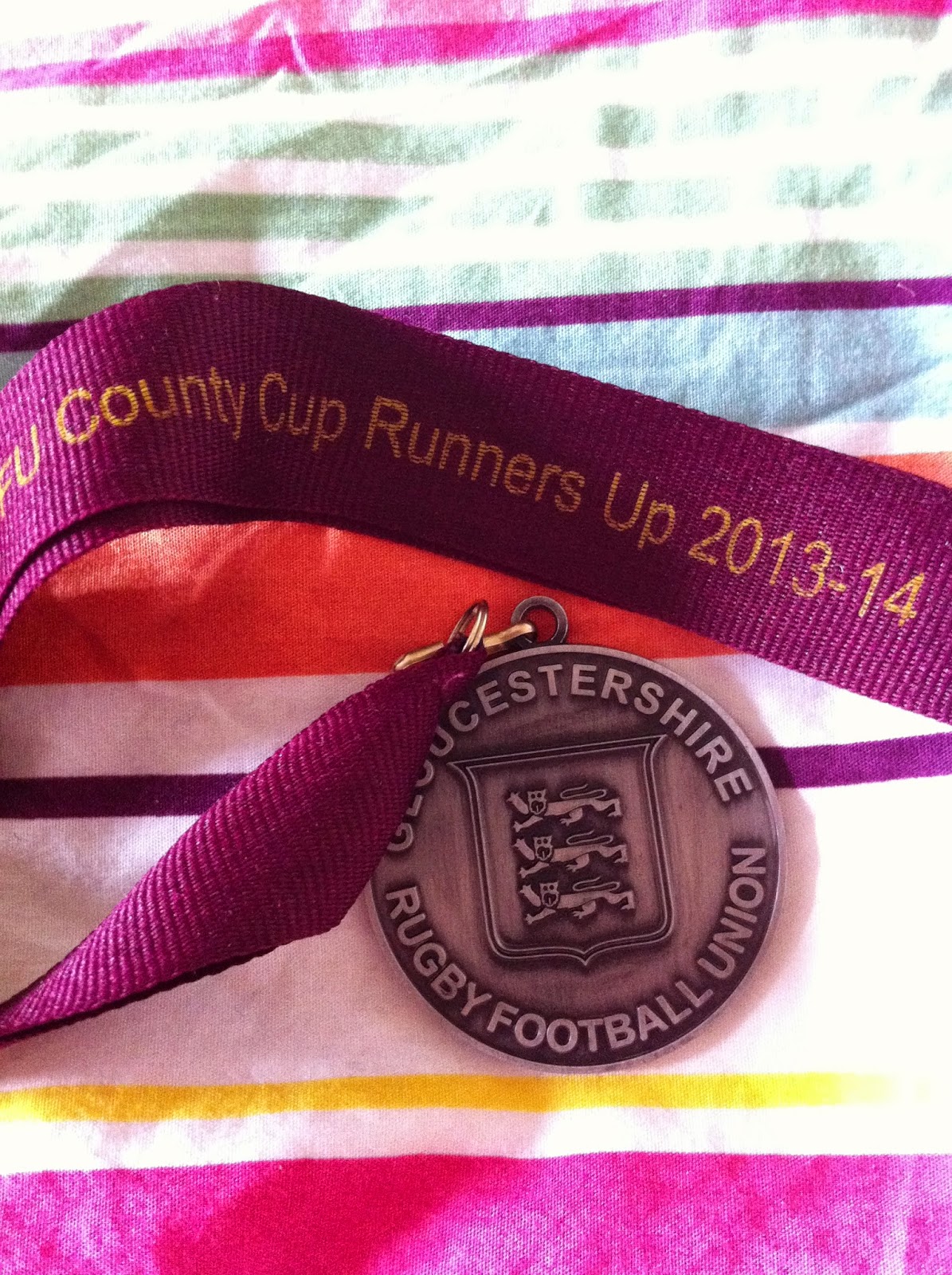