For me, there’s nothing like watching my sons play in a rugby tournament. And they don’t get bigger, better, more competitive or more exciting than the county cup.

After my younger son’s team won a tournament earlier this season against all odds they attracted a few more players to their team. Much needed, but how would the dynamic change with new players? The county cup is a true test.

This year it was just my son and me for the six hour rugby marathon that is the group stages of the county cup. Six hours is a long time to be out on the rugby pitch in the cold watching your son play rugby. But in many ways, it’s the best feeling in the world. It’s a unique feeling. Windswept, cold, nervous and excited…

First game, they were 3-0 up in half time. In the distance I could see my son in tears in pain and I didn’t know why.

This time there was a rope barrier around the pitches which only the coaches were allowed to cross. At under 8s, it was perfectly acceptable to run onto the pitch if you saw your child in pain or tears. But this is under 10s. They have to be big and brave and strong. And the play is incredibly aggressive. It’s hard to believe they are only 9 and 10 year old kids when you see the way they go at each other, the determination, the will to win…

He’d hurt his mouth (despite the gumshield), so he came off for the second half. They won the game comfortably at 5-0.

The next game was hard. They fought for it every step of the way. Possibly the other team was better, but our boys wanted it more. My son hurt his knee this time (he has a remarkable ability to hurt himself) colliding with another player and came off the pitch briefly. At least they now have the depth of squad to actually have subs. They won 2-0.

The third game was the easiest. They won it 6-1 and my son scored (in his words) an epic try. He ran pretty much the length of the pitch and he scored. I was so proud of him and he was so proud of himself. You can’t beat that feeling.

They had to win the group to be guaranteed a place in the quarter finals, so the fourth game really mattered. My son scored again and managed another game without getting injured (result!). They won that one 3-0. They’d won the group!

There was a ridiculously long period between the end of the group stage and the quarter finals. It was starting to get cold. The coaches kept the kids working. I wondered if they’d be too tired for their final game. They also plied them with a lot of Haribo for energy. Not my first choice of energy food!

They were up against the cup holders in the quarter finals. But they just couldn’t lose! The thought of it was too unbearable. After winning all those games and only conceding one try, they deserved to go through to the semi-finals. They’ve been through every year before. But everything hinged on that one game against the cup-holders. It didn’t look that likely.

My boys was in the starting line-up. My boy is big for his age, but I looked at his team and realised he was one of the smallest. They’d literally got the big guns out for the champs. Both teams fought and fought. They were at stalemate. They both wanted it as much, they both played as hard.

Just before half-time I saw my boy go in for a tackle and disappear under a pile of bodies. There was only one way he was coming out. Hurt.

It was his eye this time. He wears a scrum cap to protect his head and a gumshield to protect his teeth, so he managed to get elbowed in the eye. He had a quick ice-pack at half-time and decided to carry on. Credit to his coaches for letting him – they had subs available who could have taken over.

About half way through the second half my son’s team scored. We were elated. They just had to hold on. The other team got so close…

But they didn’t do it! My son’s team won. They beat the cup holders and they’re through to the semi-finals. So I guess those new players have fitted in pretty well.

After over six hours at the rugby ground we went home tired, proud and very happy. It’s a feeling you just can’t beat. 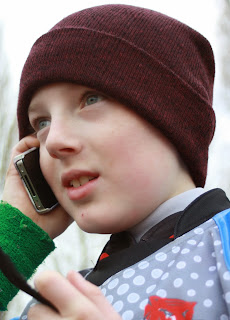 Telling Daddy the good news of his victory