The Gallery: A photo I’m proud of

Home » Family » The Gallery: A photo I’m proud of

My photography has fallen a bit behind. I used to be a good photographer and have had an SLR since I was 18, but the rest of the world caught me up and then overtook me (I think I can still hold my own in the general population, but in blog world I am WAY behind). I have a standard lens which does a decent job, but not a fabulous one. I can’t justify the expense of buying a new one, when I can take good enough pics of my kids with the one I’ve got.

My kids are, of course, my favourite subjects. I like to take portraits that capture the essence of them (preferably when they’re not looking) or nice group shots of the three of them together. And I LOVE action photos of them looking all fit and strong as they charge up the rugby or football pitch or do some cool dance moves. But that standard lens doesn’t serve me so well. My camera has a ‘sport’ mode, but the photos often turn out blurry.

I also like taking close-ups of flowers and blossom. Sometimes I take a photo I’m really proud of, and then I look at one by PODcast and I die a little inside. I will NEVER be that good. Whatever sort of lens I might get one day in my dreams.

I’ve tried landscapes, but forget it! They look like such a poor imitation of what they’re supposed to be – smaller, greyer, more dull. Why does the camera see them so differently from my eyes?

So I’ll stick with photographing what I know and love best – my kids. Because in years to come, will I really want to look at a view from a hill? Probably not. But I will want to remember my kids when they were 8, 10 and 12 – their smiles, their hair, how tall they were, how many teeth they had and didn’t have, which glasses they had, which outfits they wore.

This is one of those photos. Taken all those years ago in 2007, when my younger son was 3. Even after all this time, it is still one of my favourites. It was a candid one and it captured his essence and confidence. He’s wearing yellow, his signature colour and an England cap, a sign of the football obsession to come. I had no idea the reflection would be there or the sky would be so blue, but it just adds to a photo I’m proud of. 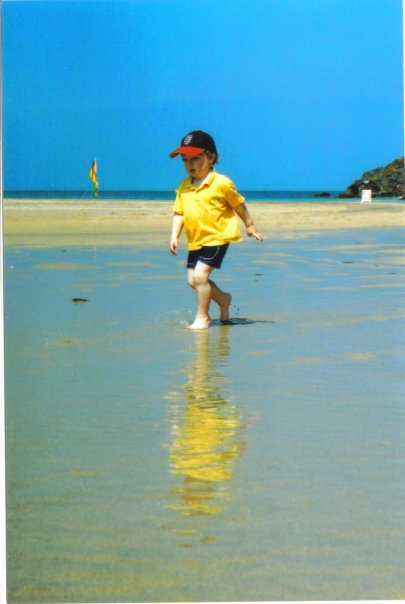 This post was written in response to a prompt at Sticky Fingers. Pop over to see how others have interpreted the theme ‘a photo I’m proud of’.