Dancer of the term

Home » Daughter » Dancer of the term

Every term, our dance school (the street one, not the ballet one) awards trophies in every class – for Dancer of the Term and Most Improved Dancer. Now I don’t know about everyone else, but the Easter holidays sometimes creep up on me, they seem so much less significant than the excitement of Christmas and all the performances and parties, or the end of the year and the prospect of a lovely long holiday. So I didn’t have time to mentally prepare myself for the stress of the trophies until I saw some pictures on Facebook on the last Monday of term.

Oh no! The trophies would be in my daughter’s class THE VERY NEXT DAY.

You may wonder why this is stressful.

Because I have a high achieving daughter who is a flipping good dancer and hates to fail. And by fail, I mean NOT WIN. As far as she’s concerned, if she’s the best (which she is) she deserves the trophy. She understands that she can’t have it consecutive terms, but she can’t get her head round someone who isn’t as good at dancing as her getting it if she hasn’t had it the previous term.

Obviously she’s actually rubbish and the whole world hates her and she will have to give up dancing.

But it goes without saying that, in an inclusive dance school and from the point of view of the other kids in the class, the other parents and the teachers, they can’t just give it to the best dancer in the class every time. They have to consider other factors – how much improvement they’ve made in their dancing/ behaviour/ confidence, whether they are a cheerful member of the class, if they turn up to every lesson… All of these factors and more go into picking dancer of the term. (Although in my daughter’s defence, she ticks all of these boxes as well as the whole being a good dancer thing.)

Now my daughter WASN’T dancer of the term at Christmas. Let’s just say that it didn’t go down that well at home.

At the end of the lesson last week I sneaked a peek through the blinds at the kids dancing.

There was my daughter in her customary position in the middle at the front, strutting her stuff, giving it attitude and totally smashing it.

Fair play to her, she is a blimmin’ good dancer. And nobody watching the class could argue that.

She SO deserved that trophy.

The kids sat down. The teacher did her spiel and then awarded the ‘most improved’ trophy. I don’t worry about that one. I know she’s never going to get it.

And with those words, I knew everything would be OK. Because there was only one kid in that room that could have the words ‘no question’ applied to them.

‘She’s awesome. And if I forget the choreography I know I can just look at her and she will remind me.’

Yes. My daughter, who is 8 years old, reminds the teacher when she forgets her own moves.

She IS dancer of the term.

And I can breathe easy until Christmas (because she will now know not to expect a trophy in the summer.) 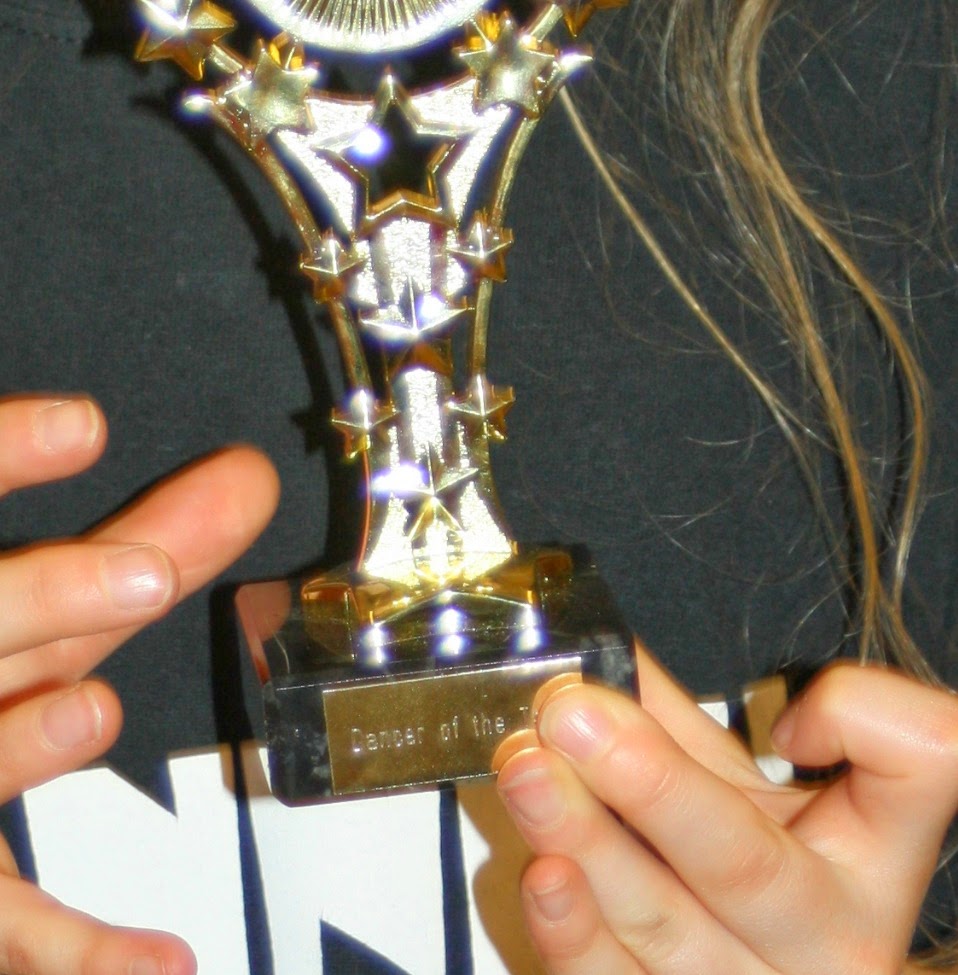 My daughter is in her fourth year of dancing. She has three Dancer of the Term trophies, one Most Improved (from when she was in year 1 and in the year 1/2 class – the only year she wasn’t the best in the class) and, my favourite, Junior Contemporary Most Promising Dancer (which she got when she was still in year 2 and in a class which was supposed to be year 3-6).