My daughter is a brilliant and beautiful dancer. I know that. I’ve always known that. But she just gets better and better. Every time I see her she takes my breath away. I am stunned by her.

While I was away at Britmums Live, in a world a million miles from real life, I got a text from a friend. I’d almost forgotten my daughter would be hard at work at dress rehearsal (and I should have been too!). It was a simple text, but it was one of the nicest message I’d ever received and I appreciated it so much:

Watching LG, she’s ace. She’s had me in tears watching her.

And as we performed our show at the weekend, I got to watch her myself from the wings. She performed three dances – two with children her own age and one with girls in years 3-6. Even though she’s only in year 2. 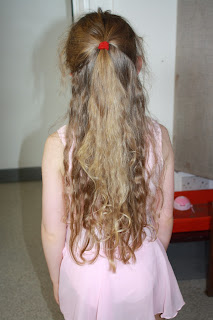 Her moves were big and sharp. She never missed a beat. She was at the centre, at the front, owning that stage. She looked like she belonged there.

And even dancing with the older girls, she never for one second looked out of place. Never looked like she wasn’t good enough or couldn’t keep up. She was just as good as them. Better than some of them.

I watched those three dances twice over and my smile was so big it almost broke my face and my eyes were damp with tears. Just thinking about it now makes me well up. I was the proudest mum. I couldn’t be prouder.

People kept telling me how good she is. Friends, strangers, one of her teachers… How she’s streets ahead of the others, how she shines.

At the end of the show there were trophies. Surely she would get one? I crossed my fingers for her. I was hoping for infant street dancer of the year, but I think she went just a step further…