My daughter came into this world on her due date exactly eight years ago today. There can be no better indicator of her future personality than that. 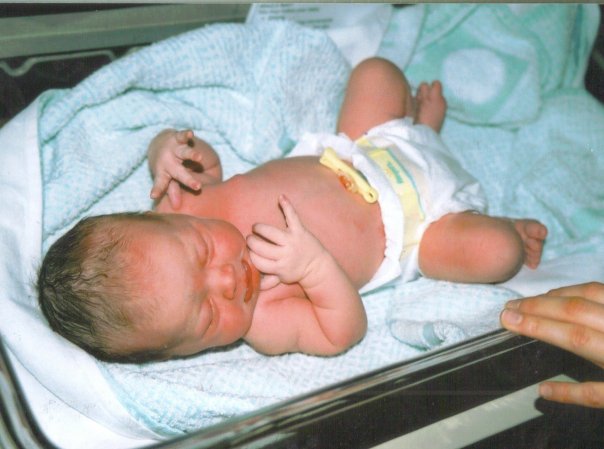 Eight years on, my baby girl is highly organised and always in control. She follows the rules and does everything by the book. She tries so hard in everything she does and is always quietly determined to be the best.

We already had two boys who were as different as chalk and cheese. We hoped our baby girl would be somewhere between the two of them – and she was. She was much slower to talk than her brothers – only starting to put two and three words together around her 2nd birthday (she’s made up for it ever since) – but physically more able. She mastered a scooter from a very young age – along with running, climbing and, of course, dancing. In the great words of Abba – she was a dancer long before she could walk. She could jig along in perfect time to music before she could stand on her own two feet.

She was shy in her early years, something we’d never experienced with the boys. Then she got her glasses and was transformed overnight into the confident girl we now know and love.

I’m ashamed to admit that we never really realised she was clever – her genius brother completely overshadowed her until I didn’t know what normal intelligence was. It only dawned on me when I heard her talking to her friends and realised how much younger they sounded. All I knew was that she sounded younger than her brothers (as she should do, really!).

She’s a chatterbox, always interested in the world around her and always has to share every last detail of it. I always know what they’ve learned at school, who has misbehaved, who has been good and what was for lunch.

When she’s not dancing or chattering, she’s usually watching telly. She loves anything with real people on – XFactor and Britain’s Got Talent are favourites, along with Take Me Out (which I can’t stand), anything with Ashley Banjo and her latest obsession – Coach Trip. She feels like she knows these people and talks about them as if they are a part of our lives.

I love to listen to her chatting and laughing with my younger son in the morning. I hate to hear her shouting at my eldest and arguing with him. Sometimes they start within seconds of getting up.

She goes to the coffee shop with Daddy at weekends and likes nothing better than going out on an errand in the car with him – endless trips to buy paint and new bits and pieces for the house or even just going to the tip have been hear idea of heaven.

She has a nervous side to her – her beloved Teddy is never far away and she has an obsession with tidiness and having everything in its place. Sometimes she has difficulty getting to sleep at night and this worries her more than it should. Strangely, I never had a problem with controlled crying for a baby of seven or eight months, but it seems so much harder with a girl of seven or eight years.

She takes great care over her appearance. I was impressed to see her wear a vest for rugby the other day (rugby has its own little weather system which makes it feel 10 degrees colder than anywhere else), but it showed under her dress. I told her it didn’t matter, that being warm was more important: “Not in my world,” she said. I don’t know where this obsession with appearance came from because it certainly wasn’t me.

She does her hair countless times a day – plaits and buns, ponytails and bunches. She will have one plait or two – hanging straight down or with an extra band at the top. She can even do a perfect fishtail. She puts little flower clips into it, which always contrast perfectly with her outfit.

She is the fussiest and slowest eater I know. Her portions are half the size of her brothers’ – and sometimes a lot less – but it will still take her four times as long to eat a meal. She will often be at the table an hour after she started eating, grappling over a tiny portion of peas. The only reason she eats anything at all is so she can have pudding. Funnily enough, the pudding isn’t half the size of her brothers’.

She is a lovely friend and can’t wait to have her best friend round for a birthday sleepover. This will be a first for all of us – we’ve never had anyone round for a sleepover!

My daughter is determined, confident, self-assured, competitive and so much more. I was blessed when she came into my life. I would have been happy to have another boy, but I am so grateful to have my little girl.

Happy birthday, my baby. I love you more each day and I can’t believe you’re 8 already.