Eyes are a big deal in our house. Because we have three glasses wearers.

I’m a bit of a phoney spectacle wearer, if I’m honest. I need them, but I don’t need them THAT much. I don’t have to wear them all the time, but I do to show solidarity with my kids. Both my younger kids are long-sighted. A lot more long-sighted than I am. They need to wear their glasses all the time, so I do too to avoid giving them mixed messages.

It came as a bit of a surprise that they couldn’t see very well, because they’d always been bright and kept up with what was going on in the world around them. I took my younger son for his first eye test when he was 4 and it became clear he couldn’t see very well. A couple of tests later and he got his glasses at the age of 5.

He took the glasses home and his sister, who was only just 3, put them on and announced ‘I can see!’. That wasn’t the reaction we expected. We were expecting a ‘ugh, it’s blurry!’. So we took her for a test and the optician wasn’t sure. It’s not easy to test a 3 year old’s eyes. How do you know what’s them being unable to see and what’s them being unable to understand or reluctant to speak up?

So we went back and back again until they could be certain that, yes, she really couldn’t see very well.

She got those glasses and she changed overnight. My shy, quiet, clingy girl who wouldn’t look at or speak to adults grew in confidence. All that time we’d assumed she was shy, it was just that her eyes didn’t work very well.

Here she is on the day she got her first pair of glasses at the age of 3, ‘reading’ her favourite book at the time. She was so happy to see properly. 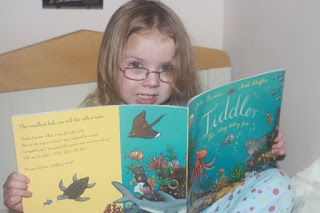 Three years, eight pairs of glasses, many eye tests and many trips to the opticians for adjustments later, her eyes are slightly worse, but she is a confident, happy little girl thanks to her glasses.

This was written in response to a prompt from The Gallery over at Sticky Fingers. Pop over to find out how more people have interpreted the eyes theme.