The other day my son broke his glasses. The glasses he’d only had two months, having broken the glasses he’d had for six months before that. Sigh. This is the life of a parent with glasses-wearing kids.

So I stuck him in his two-pairs-ago unbroken glasses, which he said hurt his eyes. Not surprising really, as his prescription had changed, and managed to get him an appointment for the same day. His test was nearly due anyway.

Now I’ve had many issues with opticians and kids’ glasses over the years. You don’t have two kids wearing glasses from a very young age without ISSUES. The world just isn’t geared up for the varying needs of kids with glasses. The market clearly isn’t big enough, the profit margins are obviously miniscule, so the choice just isn’t there.

My issues have included:

My son’s size and his love of plastic glasses He’s 9 years old, he still has two years left at primary school, but he’s BIG. Not abnormally big, not freakishly big, just big for his age. So big that kids’ glasses don’t fit him, so big that his glasses are the same size as mine. But is that his fault, or mine? Why shouldn’t he be able to wear kids’ glasses when he is most certainly a kid?! If kids’ glasses are free for under 16s, why don’t they actually make them to fit ALL under 16s, not just teeny-weeny petite little kids?!

And most of all – the thorny issue of free or indeed any sunglasses for my son and my daughter (this is actually one of the very first blogposts I ever wrote!) because, actually, sunglasses are a necessity for glasses wearers – the glare of the sun is so much worse through clear glass than it is for people who aren’t wearing glasses. They’re not a luxury. Kids should be able to have them on prescription without paying extortionate prices. 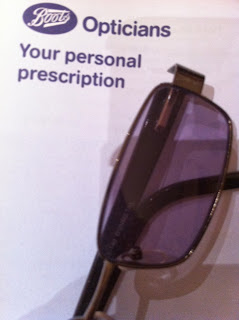 So you can understand that I wasn’t feeling overly positive as we entered the opticians’. But then suddenly everything went rather swimmingly…

My son had his test and his eyes had got a bit worse again (obviously I’m not counting this as an actual SUCCESS, but it’s not a problem, as he has glasses to correct it, of course!).

We went to choose the glasses. We pointed out the problem with his size.

While we were choosing, somebody mended his old glasses, meaning he didn’t have to spend the next week or more wearing the very old glasses that hurt his eyes.

We went to finalise the order (yes, I would have to pay, but I don’t mind paying A BIT, I just object to paying A LOT).

And then he said it… The holy grail. The thing that made this the most successful trip to the opticians’ EVER:

‘With these, you get buy one, get one free. You can have a spare pair or a lot of people like to have a pair of sunglasses.’

That is a BIG success.