Cycling in Amsterdam – taking your life into your own hands

EVERYONE cycles in Amsterdam. Everywhere you look there are people zooming around on bikes, weaving in and out of pedestrians and vehicles alike, seemingly without regard for their own or others’ safety. And everywhere you look – every bridge (there are 1,000 in Amsterdam), every railing – has bikes chained to it. There are no racing bikes, no mountain bikes, not even many geeky folding commuter bikes, they are all upright bikes with no gears and comfy saddles. A bit like cool people in London have these days. 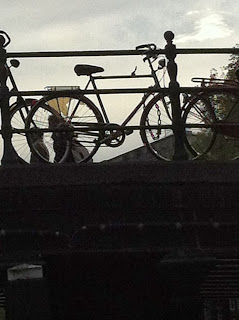 You don’t see kids under about 12 cycling. It’s not surprising. It’s the same as having a death wish. They don’t need to cycle anyway, because they’re usually dumped in a plastic crate on either the front or back of their parents’ bikes. Bike seats? They’re for wimps. I was particularly shocked impressed by the mum who had a 4 year old in a crate on the back of her bike with a 7 year old standing on the crossbar.

I thought it would be a nice idea to have a go at cycling around Amsterdam. What I didn’t know, is that I would be taking my life into my own hands.

As I picked up my slightly-too-big bike at the hire shop, I looked at it and I realised something was missing.

You brake by pedalling backwards slightly. 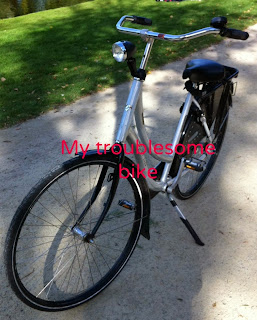 At home, we all wear helmets to cycle, as do most people. Nobody in Amsterdam wears helmets.

So I got on my too big bike with no brakes to speak of and no helmet and I launched myself into the Amsterdam traffic. Where you drive on the right. I could cope with riding on the right myself, but couldn’t really get my head round OTHER people being on the right – and the fact that you (and they) behave very differently to when you turn left and right at home. It’s all too much to take in.

A couple of years ago there was uproar in Gloucester, near where I live, due to the introduction of ‘shared space’ – a short area of road where cars, bikes and pedestrians exist in safety and perfect harmony with no barriers.

Amsterdam is shared space taken to the nth degree. There’s bikes, pedestrians and mopeds. Because most people cycle, there aren’t actually that many cars. The main vehicles you are up against are therefore lorries and vans. Oh, and did I mention the trams?!

Every time I got moving another cyclist would pull out in front of me, or stop in front of me, or a van would start reversing or appear out of nowhere. And I would go to jam on my non-existent brakes. By the time I’d remembered there were no brakes, I would usually have put my feet down and stopped like a toddler on a balance bike. Only with slightly less balance.

My husband, a keen cyclist, would be ahead of me, blissfully unaware of me stuck behind the cyclist/ van. And then when I started to cycle again, the wheels were locked and I couldn’t move. And I’m dragging the bike across a busy junction as the lights change. Because the brakes are now on. My instinct when starting to cycle is always to move the pedals back slightly. Bad move when that’s the brakes.

There are cycle paths. Some are one-way and some are two-way. There is no discernible difference between them. You just have to pray hope you’ve got it right. Oh, and cyclists share the cycle paths with mopeds. Ridden by people with no helmets. Often two people – including elderly people and kids, weaving in and out of the cyclists at quite ridiculous speeds.

We saw a lot of Amsterdam by bike. When there was nothing in the way, it was amazing. But most of the time there was something in the way and I was, sh*tting myself. Any Dutch people who are good at lipreading and speaking English (that’s all of them) would have been treated to me endlessly mouthing sh*t and the f word as I wobbled out of control. 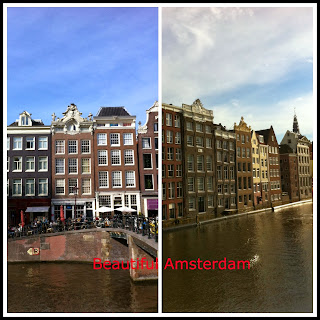 The good news is, against all odds, I made it back in one piece. Frankly I was grateful to still be alive.