As my daughter lay on the floor moaning, ‘It’s too hot! It should be raining!’, it dawned on me. She has never known a proper summer. She was born in 2006, the last time the weather was properly hot. I doubt she remembers sitting under a sunshade in only her nappy at the age of four months. Since then it’s been floods and torrential rain and wettest summer on record, with no more than a couple of warm weeks a year if we’ve been lucky.

But now it’s been really hot for, how long?! I’m struggling to remember. Every day seems to be the hottest day of the year or the hottest day for seven years or something and today is no exception. It was hot nearly three weeks ago when my son went on Scout camp and got sunburnt (he’s got burnt two or three times since, despite constant nagging advice from me – you can lead a horse to water, but you can’t make it drink), although it was probably only about 23 degrees. Then it was cool for a couple of days and then the heat was back. Back, back, back with a vengeance. Back and then some. It was very hot when I ran the Race for Life and it’s just got hotter and hotter.

But it wasn’t a heatwave apparently. Not until today in the South West (and yesterday in London and the South East). Heatwave has a proper technical meaning, it’s not just a tabloid word (phew! What a scorcher!). In a proper heatwave, elderly and vulnerable people are at risk. As are people doing sport apparently.

So temperatures of 30 degrees are a big deal and have come as a bit of a shock to all of us for whom kagoules are usually a summer wardrobe staple. Now I’m not complaining, I’d take 30 degrees and sunny over 17 degrees and torrential rain any day of the week, but we have had to make adjustments.

I’ve started wearing DRESSES. Yes, me. Who doesn’t wear dresses. I buy a dress every time I go to a wedding. I wear it and I put it away in my wardrobe and it NEVER COMES OUT AGAIN. But our office is hot at the best of times. Air conditioning? Are you joking? We work for a council. Trousers were going to be just too sweaty, so I’ve dragged out the maxi dresses I bought for my cousin’s wedding in 2009 and my sister-in-law’s wedding in 2010 and I’ve worn them. And I’ve worn shorts at home even though my legs need waxing. Oh, I walked down to school in them too. I have no shame.

My kids are not allowed to wear jumpers to school, because I know if they put them on in the relative cool of the morning, they WILL NOT TAKE THEM OFF. On the one day I made this mistake, my younger son came out of school in 28 degrees and bright sunshine wearing his red school sweatshirt, which matched his face perfectly. My eldest has only one school polo shirt (the rest of the time he wears, shirt, tie and blazer). He’s been getting it out straight out of the washing machine in the morning and putting it on.

First thing every morning and as soon as we get in from work or school we open all of the windows. It takes a surprisingly long time. When we go to bed, we shut them all (as we live pretty much in a bungalow). This has one disadvantage…

Lights on and windows open leads to insects EVERYWHERE. Moths, Daddy long legs and lots of more unusual things in various bright colours. They’re flapping round the lights, they’re resting in the bathroom, they’re all over the walls and the windows…

I drink a lot of water anyway. My younger son drinks a fair amount of apple juice, water, Fruit Shoot, Lucozaed and any sort of squash that is going. The rest of the family, not so much. This week, I have seen my husband drink water, my son eldest down full glasses of the stuff and, most incredibly of all, my daughter had to FILL UP HER WATER BOTTLE AT SCHOOL. 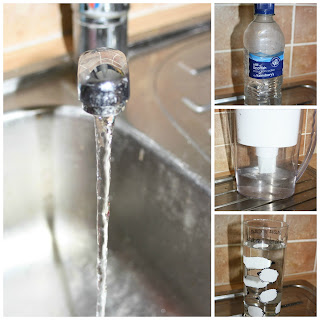 Having found the Race for Life so hard, I’m accepting that excessive exercise in this weather is not a good idea. Whether or not I’m training for a half marathon. I managed an eight mile run last Thursday at 9am. The route includes a lot of shade and it wasn’t bad at all. I ran the same route last Sunday morning and it was hard. I could have done the full distance, but I wasn’t sure it was worth it. I kept getting those images of fit people who die on a run in my head. I knocked a couple of miles off. Six miles when the weather is in the high 20s is plenty, I think.

If the weather forecasts are to be believed, this could be our life for the foreseeable future. Have you and your family made adjustments for the hot weather?