The Gallery: Into the archives

Home » Family » The Gallery: Into the archives

A few years ago, my mum and dad got my old photo albums out of the loft and gave them to me. I was a pretty prolific photographer by late 80s/ early 90s standards – although I still probably took less photos in a month than people these days take in a day.

The albums were full of school friends on exchange visits and end of exams, as well as birthdays, Christmases and a lot of pet rabbits. My mum and dad had hair that wasn’t grey, my sister was still a child and my brother was slim and wore glasses. My friends wore a variety of outfits which speak so loudly of those times, even though we liked to think we were somehow individual or alternative.

So what to share? How to summarise those times? Long-lost friends in bright, baggy clothes would be good, but I went for this. Because it says so much and reminds me of so much about my teenage years. 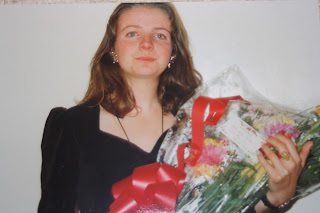 From the age of 14 to the age of 18 I spent every day of the summer holidays at a children’s theatre group. We put on a play from scratch, made the costumes and sets and sorted out the lighting and music in those six weeks. All without adult help. We were very proud of that bit, it made us unique. We stood our ground firmly whenever it was suggested that maybe adults should play a part. We took the younger kids over the busy main road to the park at lunchtime where they played hide ‘n’ seek near a stream. It was a health and safety nightmare which fills me with horror now, but parents were willing to trust kids as young as 6 with a group of teenagers.

At the age of 16 I started playing a more active role in the backstage stuff, while also playing Aunt Polly in Tom Sawyer. At 17 and 18, I was the director of the show. The first play was a bit crap, the script wasn’t great and we got a poor review in the local paper (imagine the local paper criticising a group of kids – it was acceptable in the 90s). But my final show was a triumph. I directed Alice in Wonderland, which had always been a favourite story of mine, and it was brilliant. Brilliant acting, brilliant sets and a fantastic review in the local paper.

The rules stated that you had to leave the company at the play after your 18th birthday, so I went out on a high.

This is me on my final night, surrounded by flowers and in floods of tears. I’m wearing a proper evening dress, as I always did to every night of the run – and I never wore the same one twice. The dresses were mainly bought from Vivien Smith Simply Clothes – a rather fuddy duddy ladies’ dress shop I worked in on a Saturday – because I got a discount and nabbed the best stuff as it went in the sale.

I’m crying because it’s all over – four years of fun, friends, great experiences and sheer hard work. I’m crying because people loved my show and loved me (yes, even small children in an amateur performance get proper ‘lovey darling’). And I’m also crying for the future. In a few short weeks I would leave my home town to go to university. I was happy with my family and friends. I wanted the new experience, but I was scared and sad because I loved my simple life and my home town.

I’m linking this to The Gallery over at Sticky Fingers. Pop over to see how others have interpreted the theme ‘Into the archives’.