Until now, they have had the very popular Micro scooters a lot of kids have – with two wheels at the front and one at the back. The boys have add theirs three years and one of them is slightly past its best. As they are identical black ones, the not-so-good one always belongs to the other boy! My daughter started off with one of the smaller Micro scooters for 3-6 year olds and got one of the bigger ones last year.

So, loving scooters as they do, it will be no surprise to discover that they were very excited when a Razor Berry Kick scooter arrived for them to test. I told them it was to share, but it still caused arguments, which obviously is a good thing in this context. Suddenly both boys were claiming the not-so-good Micro scooters was theirs, so they had to be the proud owner of the new scooter! 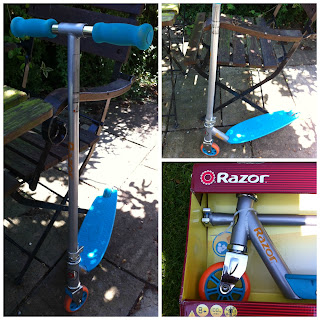 The scooter they were testing is in a cool, unisex torquoise and orange colour combination (there are other colours too). This particular scooter is for age 6+, but this didn’t stop the boys saying it definitely wasn’t for their 7 year old sister to use! There is also a version for children aged 8+ and even an adults’ version. Although the Razor Berry Kick is strong enough to hold 100kg, so it was fine for this adult to try out!

The scooter arrived in a box and was very quick and easy to assemble. So easy in fact that my 9 year old son did it himself, but I got Daddy to check it afterwards just to be sure it was safe.

The Razor Berry Kick has two wheels and is very slim and fast-moving. It feels more adventurous than the old scooters – perfect for tweens. Of course, this is part of the fun for older children and exactly why they like it so much! 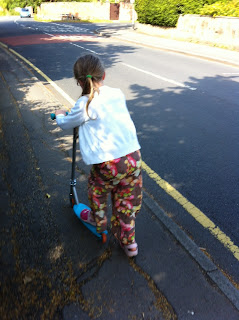 My younger son has spent the most time on the new scooter and has been the envy of his friends! He would definitely recommend it to them. Parents will be pleased to know that it is good value at £49.99 (RRP). 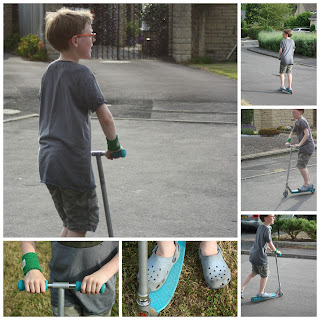 We were sent a Razor Berry Kick scooter for the purposes of this review. All views are those of myself and my children.