I’ve read a lot of blogposts recently from mums who feel like they’ve lost their way and lost themselves. They are usually stuck at home with a 2 or 3 year old toddler, completely at their beck and call. They probably expected the first year as a mummy to be hard, but didn’t know it would carry on for years and years. They don’t look like themselves, they don’t feel like themselves, they don’t remember who they used to be.
I know exactly how they feel. I’ve been there. Most of us have. Except when my boys were 2 I was also pregnant. It’s not easy being pregnant with a 2 year old. It’s not easy being pregnant with a 4 year old AND a 2 year old. But it’s a breeze compared to having a 4 year old, a 2 year old AND a newborn.
When my kids were small, I used to look at women in their late 30s and early 40s and wonder why and how they looked better than me when I was so much younger. Why was their hair nicer, their clothes nicer, why did they have an air of confidence?
Now I know. Their kids had started school. They were starting to find themselves and get back to who they used to be. I’m there now, I’ve been there a while, so I’m writing this especially for people who aren’t there yet. Just to let you know you will get there in the end. You will find who you used to be. You might be a bit of a variation on what you were, but you will find things you enjoy away from the kids and get your confidence back. When you get there will almost certainly depend on when your youngest starts school. So if you only have one, it will take four years. If you have more, it will take a lot longer… My eldest was 9 when his little sister started school, so that’s how many years it took me to start getting properly back to normal.
It started with running. Almost as soon as my daughter started school, my husband signed me up for a half marathon. He didn’t really ask me, he just did it. And I’m very grateful for that. Because I love the freedom of running and the sense of achievement of covering a long distance and completing a race. I’ve done three half marathons since my daughter started school and have just signed up for my fourth.
Then there was the dancing. A middle-aged bird who loved to dance in clubs back in the day signed up for a street dance class with women 10 years younger than herself. And loved it. And thrived. And got better and better and better at dancing.
And finally there was the blogging. Writing has given me a confidence and an identity I feel can still be lost in day to day life. It’s partly taken over my life. I think I spend almost as much time blogging as I do at work. But I enjoy it and I wouldn’t give it up for the world. It sounds naff, but it’s helped me find myself. It’s also helped with my work because it’s helped my writing to improve. After the endless restructures, I’m basically writing all day every day at work, which suits me down to the ground. I’m not senior, but people know I’m a safe pair of hands. If people want something written or something checked, they know who they can go to.
After nine years with little confidence, feeling like ‘just a mum’, I can say these things about myself:

It’s not rocket science or brain surgery, I’m not aware of there being a ‘middle aged street dancing’ Nobel prize. But it’s good enough for me.

I already had this post in mind when I received the most amazing Christmas card. We don’t usually do Christmas cards at work – for environmental, money and laziness reasons. But one of the ladies broke ranks. Not only did she send Christmas cards, she made them herself. She is a lovely colleague and we have a lot in common, but we also have a lot not in common. Compared to many of my colleagues, I haven’t known her that long.
But she sent me the most awesome Christmas card. It summed up all that I’ve just written – and it was her view, not mine. 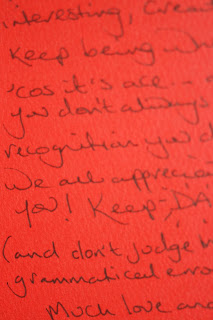 You are talented, interesting, creative… Keep being who you are ‘cos it’s ace… and whilst you don’t always get the recognition you deserve… We all appreciate and love you! Keep DANCING! (And don’t judge me for my grammatical errors!) Much love and respect x
I got there in the end. After many years in the mummy wilderness. If you’re still stuck there, hang on in there. You will make it too.