A canal boat holiday is certainly a varied experience. It’s like no other holiday in the world. Here’s some of the things we encountered. There was some serious bed hopping going on and we got stuck in the mud.

Being on a canal boat has a lot in common with the water shortages of the floods in 2007 – See my water shortage post here Cleanliness and fashion considerations go right out the window.

As soon as we set sail, I had a cap on like an old sea dog. The kids went to sleep in their clothes on the first night without brushing their teeth. And they didn’t brush them in the morning either. 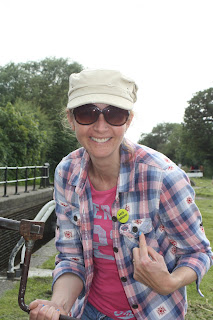 No-one cares what  you look like, the water supply is limited (it’s carried in a tank you have to fill up yourself) and if you clean yourself you’re only going to get dirty again five minutes later. Showering is an every other day activity (at most). Hairwashing is frowned upon – think of the water consumption. There’s not enough water for conditioner and not enough room to be applying all over body moisturiser.

So it’s hats on, old grubby clothes on (and getting grubbier by the minute) and amusing canal slogan badges for the whole family – Captain (for Daddy, naturally), First Mate (no1 son), Cabin Boy (no2 son), Tiller Girl (daughter -not actually true, but pink and including the word ‘girl’ therefore ticking all the required boxes for a 6 year old member of the fairer sex). I was ‘lock labourer’ (although ‘lock manager’ or ‘lock queen’ would have been FAR more appropriate).

These issues were further compounded by a broken plug in the bathroom. It went in and it wouldn’t come out. As usual, my husband thought I was just being stupid and incompetent. Because I usually am. I have a big gap in me where the ‘bring able to do things’ gene should be. But no, the plug was broken. So all hand washing and teeth cleaning had to be carried out in the kitchen from our second day on board.

And then we came to fill up the water. Oh my God. We discovered we were in possession of the official World’s Leakiest Hose. The shame. It had about 30 holes. It created an actual rainbow. I was surprised we got any water in the tank at all. And I had to sit there, holding the hose into the tank, covering the last five holes with my hands and shouting ‘it’s not our hose,’ to everyone who walked past. And I had to turn the damn thing off every time someone walked past, otherwise we would have drenched them. Shameful. 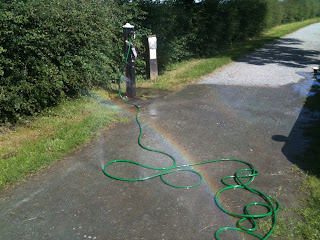 I planned to spend a lot of time reading on the canal boat. I brought along Sebastian Faulks’ literary masterpiece, Charlotte Grey, plus The Night Circus, which looks amazing and a couple of amusing travel books – one about canal boating (of course) – Narrowboat Dreams by Steve Haywood and Ben Hatch’s Are We Nearly There Yet?. I was looking forward to reading them all. And I ended up reading less than I do at home.

My boys had a huge pile of books with them and read almost the whole time – Diary of a Wimpy Kid, Harry Potter, Beast Quest and Mr Gum. They happily exchange books and will read the same ones again and again.

But guilt didn’t allow me to read.

My poor husband did ALL the driving. Neither my sons nor I could be trusted to take control for even a minute. And he did his fair share of domestic tasks too.

So when I wasn’t doing locks, making drinks, sweeping the floor or unearthing clothes and toiletries front the many mysterious places we’d hidden them, I just didn’t think it was fair for me to read. So I sat talking to my husband as he drove.

Which is probably a better use of my time, since I don’t actually usually get time to talk to him in ‘real life’.

The real world gawps at you and takes photos as you pass through locks and across aqueducts. They smile at you in their clean clothes and accessories sat outside the canal side pubs. When you go into the Spar shop in a middle-of-nowhere town they know you’re from the canal from your tanned (dirty) face, your greasy (or frizzy) hair. And your fluorescent yellow badge that says ‘lock labourer’. For that week, you are not one of them. You are different. An unwashed alien from a different planet.