The canal boat: ‘At least I’m not dead’

At the start of the week, the boat and canal were treated with healthy respect.They are dangerous after all. If my daughter wanted to go on the roof, we lifted her carefully up and down again. The kids all have life jackets, but the weather was very hot, so life jackets became for locks only.

Pretty soon, the kids were growing in confidence, clambering up and down the roof, walking along it or the narrow ledge along the side of the boat while it was in motion and jumping off when it was further from the bank than we would like.

I looked at my eldest son, who is slightly reckless and rather clumsy and I thought there was a reasonable chance he would fall in during the week.

The boat has an entrance down the middle, which is a hatch in the roof with an interior ladder. It’s not the safest of places. The idea is you lock everywhere else inside, then the boss climbs out of that one and padlocks it for security when you leave the boat. He (and it is almost always he) climbs in that way when you get back in and opens the rest up for everyone else to get in more safely.

The kids were not meant to go in and out of this hatch. 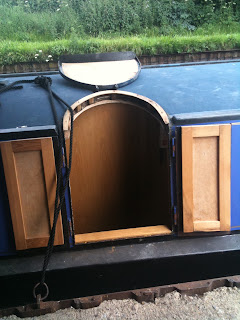 We were moored and had just finished eating. I was clearing the plates away. The kids were going crazy for the large number of ducks swimming around the boat.They were all climbing out of the forbidden hole.

Suddenly they were all shouting and screaming. They shout and scream a lot, but this was different.

I can’t remember if they told me what was happening or if I just went to investigate, but there was my daughter, face just visible above the water, with a pink Croc and a water bottle bobbing away from her.

Seeing your daughter’s little head surrounded by filthy brown canal water is not the nicest sight. In fact it’s horrible and scary. My first instinct was to grab for her, but my exit was blocked. By my eldest, standing on the outside of the forbidden hole. To grab for her would be to knock him in.

So I did what anyone would do – I screamed for my husband, who was right behind me and instantly hauled her up and into the boat. I don’t know how he moved my son, all I know is my girl was out, dripping wet and screaming, within a second of me seeing her in the water.

We don’t know how long she was in – it must have been just seconds. The boys say she went under and they were going to dive in to get her. She was obviously climbing in a dangerous place while holding a bottle of water, making it harder to grip.

I pulled her clothes off her and got her in the shower immediately as she carried on crying. Canal water is filthy. You really don’t want to be covered in it. Only an hour earlier, I’d said to her ‘if you fall in that water, you’ll be sick’. To her credit, she’d managed to keep her mouth firmly closed, and all those years of swimming lessons had paid off, because she was able to keep herself above water.

In the shower, she screamed for her Crocs. (She REALLY hates losing things.) My eldest managed to fish them out with the aid of the boat’s pole. She coughed and spluttered a bit, but she wasn’t sick.

And she kept saying ‘At least I’m not dead’ to reassure herself before crying all over again.

The boys must have been shocked, because they spent the rest of the day being extra gentle and nice to her, which my eldest NEVER does.

Wrapped up in a towel on the settee, with a glass of (clean) water to drink she said ‘Daddy saved my life’ and decided to write a thank you letter to her swimming teacher – for teaching her to swim and tread water.

She cried for all of her friends who can’t swim, in case they ever get in the same situation.

For a while, she wasn’t even going to have the ice cream she’d been looking forward to. That would have been serious. But she did.

So it was life jackets on and no climbing all over the boat for the rest of the holiday.

And the worst thing? After the mud running incident , my husband had threatened no Barcelona, but this was the final straw. He says he just can’t trust us not to have accidents, so that trip to Barcelona we’d all dreamed of , but not actually booked, is definitely off.