So this year, it was just me and my sister representing our family.

I’d done two 13 mile training runs just before the half marathon and I’d found them both hard, physically and mentally. I’d completed the first in 1:59:20 and the second in a disappointing 2:02:20. Over the last few years, I’ve finished most of my half marathons in around 1:50. This time round, I knew I just had to aim for sub-2 hours. I would be happy with something around 1:57 or 1:58. My sister, running only her third half marathon, was looking for a PB of between 2:05 and 2:10.

I’d thought I would aim for a steady nine minute mile pace. But I also knew I could run fast at the start (it’s pretty much downhill for a mile).

The start of the race was delayed until 9.10. It felt surprisingly cold, which wasn’t a bad thing. It was cloudy and drizzling a bit. Needless to say, it soon felt warm.

Around four miles, I started feeling a bit tired and sick. I had a Blok energy sweet and thought I needed to slow down a bit. I did that mile in 8:44. I felt a lot better after the Blok.

The drizzle and the clouds continued and I just kept running fast.

My husband and brother-in-law had planned their spectating really well. They popped up seven times over the course, with my daughter, niece, nephew and Hetty. The good thing about the course is that it is all pretty close to the town centre, so it’s easy to move from one spectating spot to another. It is a real boost to see friendly faces on the course.

There were no mile markers on the course! Apart from one at seven miles (which unhelpfully said it was six miles and made me endlessly question how far I’d actually run) and one at 12 miles. I know some people find mile markers depressing, and I know that pretty much everyone measures their run on a watch, but I quite like them.

I ran seven miles in under an hour. I was definitely going to get in at well under 2 hours.

The water stations were also poor. I don’t mind too much, as I carry a drink with me, but there’s plenty of people who rely on them. There were three water stations on the main course – at about four miles, seven miles and 10 miles. Randomly, there was also one as we entered the racecourse at about 10.5 miles, but nobody really needed that so soon after the previous one.

From nine miles onwards, Cheltenham half marathon is mentally quite tough. It weaves backwards and forwards through the Pitville area on the approach to the racecourse. Even though you know you’re not ‘nearly there’, you feel as though you are. As I approached Albert Road (a bit of a hill), I thought ‘Oh God, a hill’. I felt as though I was plodding up it, but my watch told me I was running up it at 8:20 pace.

Cheltenham Racecourse at Cheltenham half marathon is legendary for being bloody awful. Everyone hates it. It’s 2.5 miles, and a bit up and down. The surface varies and there is no support out there. You can also see literally every person who is running there. It’s just runners for miles and it’s soul destroying.

But my time was good and I was overtaking people. I actually felt pretty happy and comfortable.

I finished in 1:53:25. I was just inside the top 100 women (not bad for an old bird!) and 20th in my age category. It was three minutes slower than last year, but I was really happy with it. The whole race was more enjoyable and easier – and I didn’t have the worry about my son (who collapsed at the end of the race last year).

My sister finished in 2:06 – eight minutes faster than last year.

After a difficult few months of running, I felt like I’d got my mojo back. 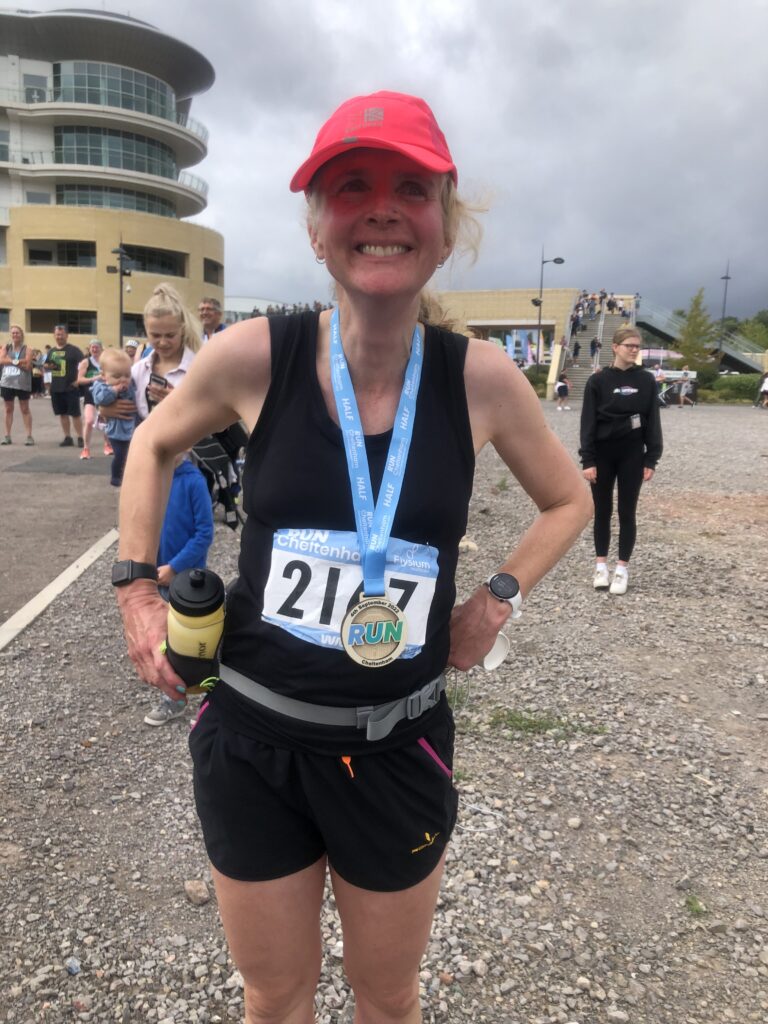