Back in the day, before we wanted a dog, we used to think they were a right hassle. People couldn’t go out because they had a dog. Or they had to take the dog with them and it would be annoying. Or they had to arrange for someone else to look after the dog.

But then we got a dog, and we forgot all about that.

For about three or four days, until I realised I wouldn’t be able to go to an athletics competition with my son BECAUSE WE HAD A DOG.

We’ve never been big on days out. Our weekends have been dominated by kids’ sport since my son (who is now 18) was 7.

As the outdoor athletics season began, we started taking Hetty with us to competitions. It wasn’t a lot of fun. Dogs weren’t exactly welcome, but organisers know they can’t ban them either, because sometimes people are travelling long distances and dogs can’t be left at home. Hetty tended to be a bit fidgety and we had to keep her on a short lead, which of course she didn’t like.

The first few competitions of the season were at our local stadium, so she didn’t have to be out for too long.

Then we had to go to Swansea. I’m not very well travelled and I’d never been to Swansea before. I discovered it was two hours away on a clear run – longer in bad traffic or with roadworks. If both my husband and I wanted to see the kids in action (which we did), we had to take Hetty.

Hetty likes the car, but only travels very short distances. Her longest drive previously was Stratford-upon-Avon, which is about 45 minutes. If she was fidgeting or crying, Swansea would be a very bad journey. I was also slightly worried about travel sickness. She hasn’t been sick in the car, but her record of being sick generally is not great.

I was dreading the journey and would have given anything to leave her at home.

When you first get a dog, you’re warned that they shouldn’t spend too long exercising on the lead as it’s bad for their development to do too much. As a rule of thumb, they should only do five minutes a day per month of their age (although additional time running round the garden etc is fine – as they control when they stop, start and rest). We know that cockapoos can keep going for hours, but we’ve been good and built up Hetty’s time and distance gradually.

The competition would be a long time on the lead.

Hetty was very good in the car on the way there. Then she was literally welcomed with open arms by the security guard at the stadium. While she wasn’t allowed right by the track, we could stay just outside with a very good view. We also had room to walk her up and down and room for her to lie down. We hadn’t really considered that she would have to lie down with a lead on, but of course she did. And she was fine with it. 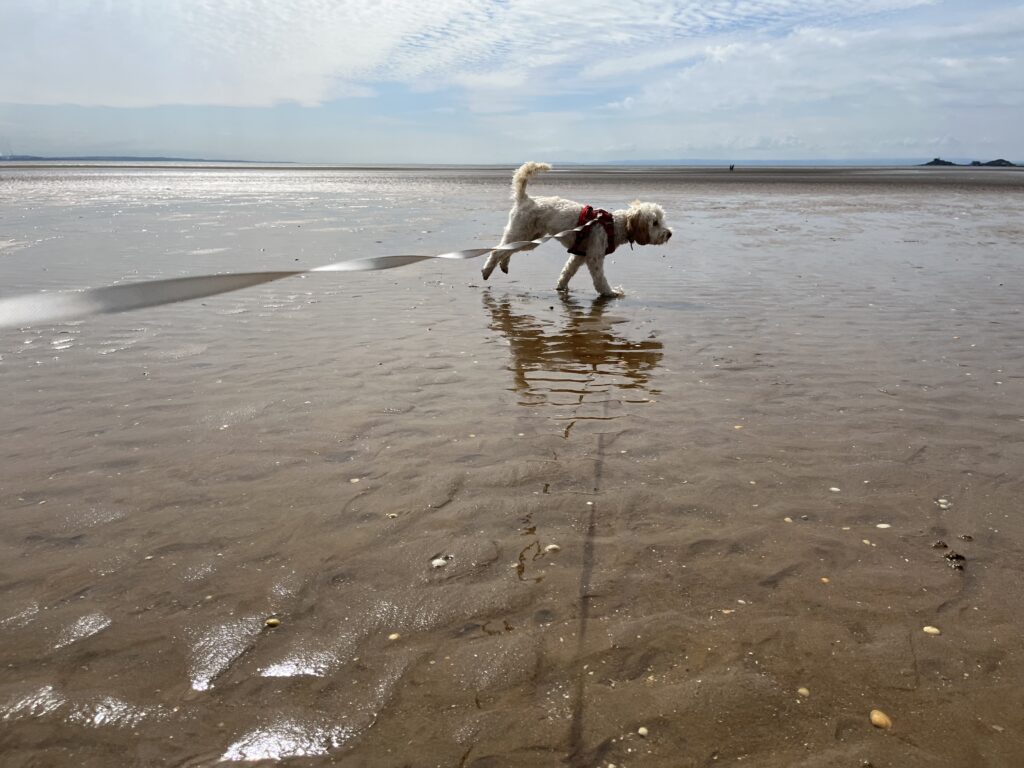 A dachshund owner told us that her dog particularly likes cockapoos, but won’t interact with other dogs. We also met a four-month-old Great Dane, who was already incredibly big and apparently eats 2kg of raw meat a day! By comparison, Hetty eats 190g of dry puppy food a day.

Best of all, the athletics track was a stone’s throw from the beach.

It was a pretty long and intense day of competition, but Hetty got to have two very short walks on the beach, which she loved. She loved the sand and digging, not to mention drinking the sea water.

We didn’t exceed the time she should be walking and she was mainly resting on a loose lead.

Then she was very well behaved in the car on the way home.

She had a lovely day and so did we. Incredibly, she was less trouble on a long day out than she is at home.

It was a huge reassurance to us to know that she can cope with a long time in the car. Altogether, we were in the car for about five hours, which is more than the total time it should take us to get to Cornwall in the summer.

Next time we need to go somewhere, I will know not to worry. Hetty will cope just fine with it. 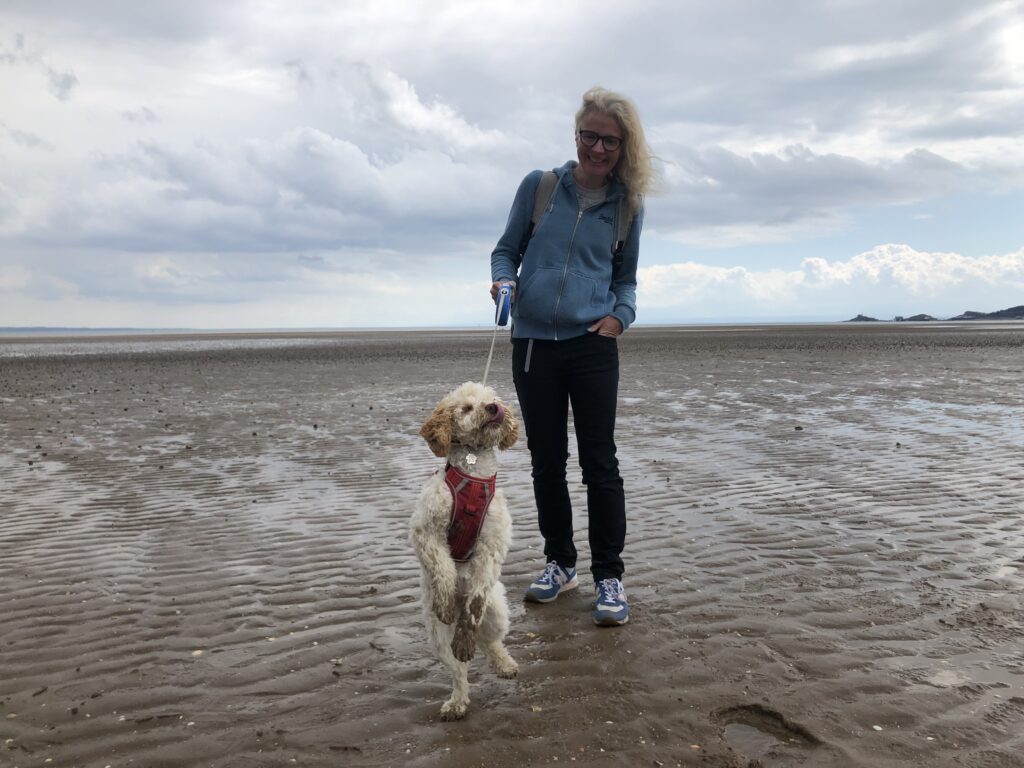