Things I worried about with getting a dog

Home » Family » Things I worried about with getting a dog

We’d been considering getting a dog for a long time before we finally took the plunge and got Hetty the cockapoo puppy. There were a lot of things I was concerned about, which were holding us back.

The things I worried about were:

As a vegetarian, I was worried about the smell and texture of the dog food. Yes, I know you can get vegan dog food, but I don’t feel comfortable with that. Surely you should feed a dog what is best for the dog, not what’s best for you? Anyway, it turns out the dog food is absolutely fine. It hardly smells at all. Ironically, it is the dry dog food which smells more than the actual meat.

I have a phobia of vomiting, so the worry of the dog being sick was very real for me. As it happens, Hetty was sick soon after she got home for the first time. I was already feeling shaken and stressed by bringing a puppy home, and that just made it a bit worse. My husband dealt with it and I didn’t have to see anything. A couple of weeks later, she was sick when my husband was out, so I had to deal with it. I surprised myself that I didn’t feel too bad about it. It’s not something I want to deal with too often and I would definitely still worry about her being sick on the carpet or good furniture though.

My husband had heard that dogs weeing and pooing on the grass ruins it. My husband is very particular about the grass! As it turns out, our main worry with grass actually became that she would eat it and make herself ill, so we barricaded the grass off. She does all her wees and poos on the stones next to the patio, so hopefully when we do allow her full access to the grass she will continue to go back to the stones.

We take her on the garden for supervised play every day and she has completely trampled one of the flowerbeds and surprisingly it bothers me more than my husband. We’ve put so much work into the garden over the years and one lively puppy has undone it with just a few crazy play sessions. Hopefully it will recover and she will run on the flowerbeds less when she’s a bit older.

The things I didn’t get worried about before, which I now know were far more legitimate worries:

I had no idea just how tiring having a puppy would be! Although things improved pretty quickly, if I’d known how tiring it would be, I would definitely have worried.

I know that people get puppies and can’t cope with them, but I always knew if we got a dog it would be for life. Yes, it can be hard at first, but we are coping and will continue to cope.

The list of things that are poisonous for dogs is quite astonishing, so I’m constantly worrying about a piece of onion flying out of a pan and being hoovered up by her.

Clematis is just one of the many plants which is poisonous for dogs. Well, that’s OK, because our clematis is at the back of the flower bed, she couldn’t possibly go near it! She was running across the flower bed and straight at the clematis after we’d only had her for a week. That was when we decided to barricade the garden off. Then there’s the stones and the litter and all of the other things she just keeps picking up and putting in her mouth… I used to think there wasn’t much litter around, until we got a puppy. She finds every single bit of it!

I knew people could be allergic to dogs, but it never occurred to me that it would happen to anyone in our house. And if it did happen to anyone here, I would expect it would be either me (always sneezing and suffers from eczema) or my eldest (has a peanut allergy). It turns out that my daughter is allergic to dogs. Her eyes started hurting two weeks after we got Hetty, and it took another two weeks before I realised what was causing it. She’s now on antihistamines for the foreseeable future, but at least her eyes feel better.

The final fear is connected to the eating and is a bit irrational, but it’s very real. It’s just like being a new parent. I am constantly worrying about something terrible happening to Hetty. If we’re not tripping over her, she’s trying to eat something she shouldn’t or sticking her head in a closing door. The world is fraught with danger for a puppy and none of us could bear to lose her. 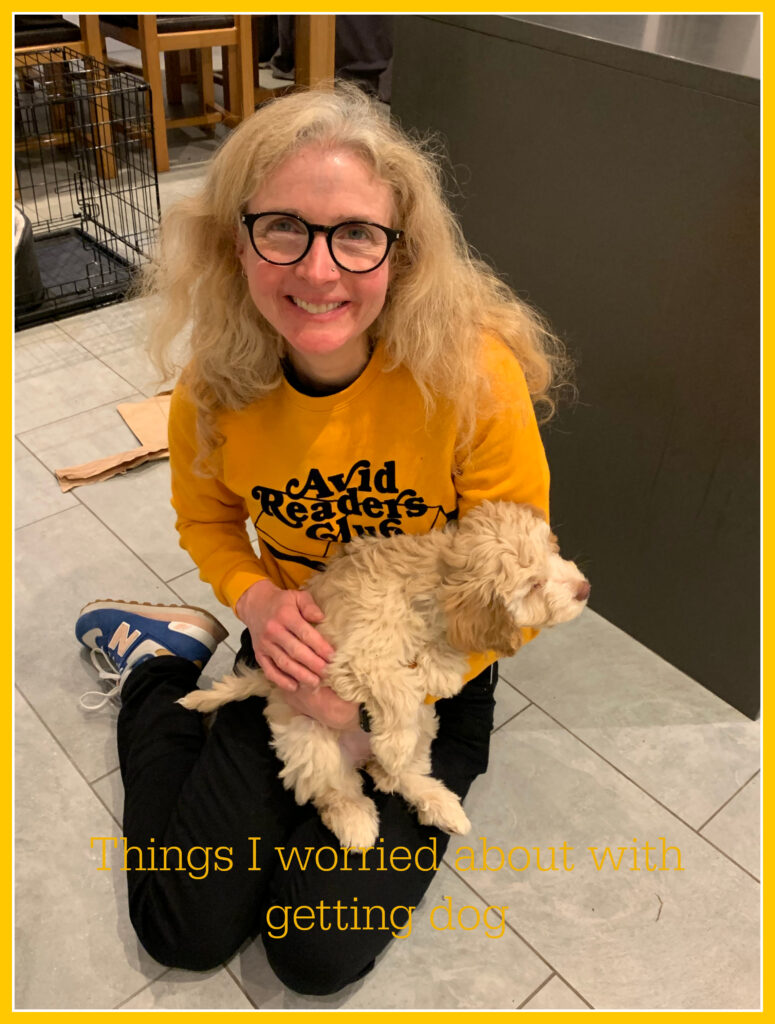