Many Different Kinds of Love by Michael Rosen

Many Different Kinds of Love by Michael Rosen is the story of his Covid-19 experience – from becoming seriously ill through to his time on a ventilator and his long recovery. It was, of course, lent to me by my dad.

Michael Rosen is the author of a huge number of children’s books, including the classic We’re Going on a Bear Hunt. He was Children’s Laureate between 2007 and 2009. He wrote a poem called These Are the Hands to commemorate the 60th anniversary of the NHS and, just before the pandemic started, had worked on an anthology of NHS poems giving a voice to NHS staff and raising money for NHS charities.

Michael Rosen became ill in March 2020. This was when people weren’t tested for Covid and were told to stay away from GPs and A&Es at all costs. People died at home because nobody, including themselves, realised how ill they were. Just before he was admitted to hospital, Michael and his wife Emma spoke to a paramedic on the phone who assured him that he was getting better – he wasn’t feeling any worse and he wasn’t coughing. Emma became increasingly worried and called on a GP friend, who tested Michael’s oxygen. It was the lowest she’d ever seen in someone who was still conscious. Testing his oxygen at that point definitely saved his life.

Many Different Kinds of Love is a beautiful and moving read. It is very short. I read it 24 hours and it is certainly something you could read in one sitting. It is a series of ‘prose poems’ – thoughts and observations throughout Michael’s illness and long recovery.

There are some beautiful notes from the staff caring for Michael while he was on a ventilator. My dad has these too. Every day or every shift, the staff member caring for him wrote a few lines about how we was doing and what had been done during to him during the shift. This is very useful for a patient who has effectively lost a chunk of their life, to help them piece it back together again. There are also messages from Michael’s wife, Emma, and a long letter from Dr Kate, the GP who first helped him.

My dad, who was at one point the sickest patient in Gloucestershire Royal Hospital, can relate to so much of it. From the different tubes to learning to walk and even hair loss and hearing loss after being ill, it is a very similar story.

In the blurb, it relates a line from the book: Every so often a doctor or nurse stands by my bed and says, ‘You were very poorly.’ My dad had this a lot too. It is important for patients to understand just how ill they were, because it’s hard for them to get their heads around it.

(I’m pleased to say that my dad was admitted to hospital at a much earlier stage in his illness than Michael, so his recovery was much quicker.)

I found this book a tough and emotional read. I can only see it through the eyes of the daughter of a Covid survivor. I suspect others would find it tough too, but I don’t know how tough. When I first started reading it, I actually regretted reading it at bedtime, because there was so much going round in my head.

I would recommend Many Different Kinds of Love to anyone. It is an essential read to really understand what Covid-19 means to patients, their families and the people who care for them. Preventing this suffering is why we were all in lockdown for so long, and it would take the hardest heart not to agree on the importance of that. 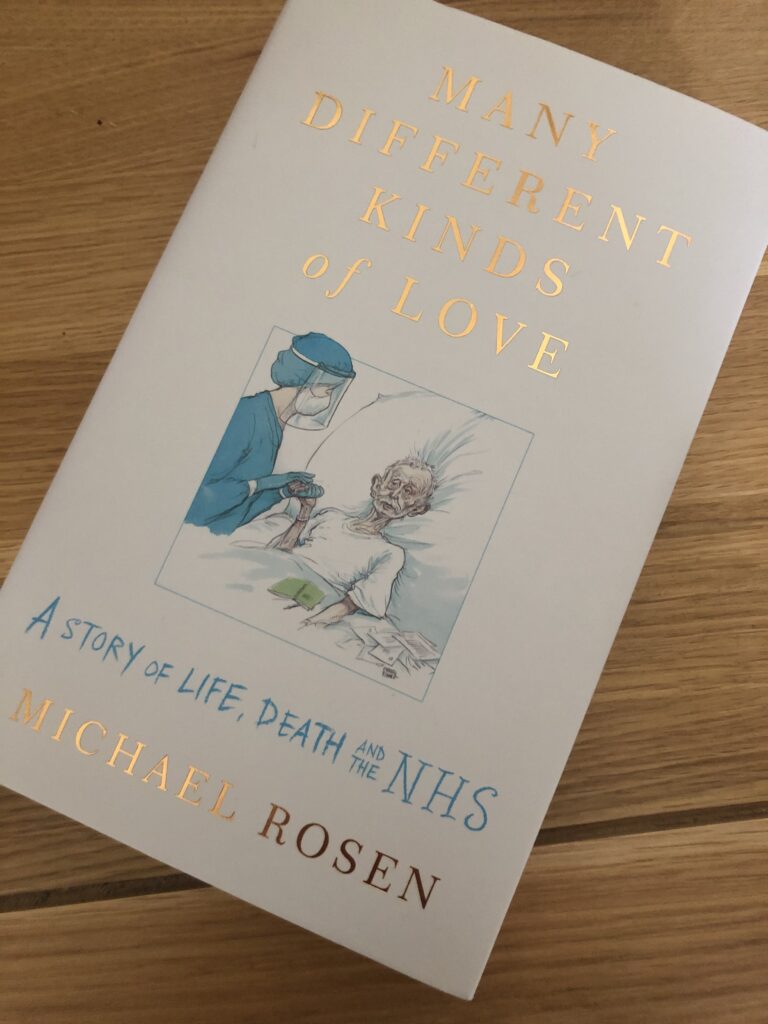