My younger son has always been notoriously secretive about his letter to Father Christmas. When he was younger I had to make sure I intercepted it before he put it in the postbox, because you could always guarantee it contained a list of things he’d never expressed an interest in before.

When he was 4, we were short of cash and we’d bought his presents, when he told nursery staff on 20th December that his Christmas wish was for a Superman outfit. When he was 6, I steamed open the envelope to discover he wanted toy fighting hamsters and all of the accessories to go with them. I would never have guessed those in a million years.

Now he’s reached the magical age of 11. Magical in that he’s too old for toys, but he’s too young to want cool clothes (otherwise known as Superdry in our house). It’s impossible to know what to get for him. Add that to the fact that it’s not long since his birthday, when he got not only presents, but a fair few vouchers and some cash. He also got a cash incentive for getting into grammar school and he only went and won £150 worth of K’Nex and an iPad Mini, of all things, recently. He is literally the boy who has everything. He needs nothing.

So we were struggling. He hadn’t expressed an interest in anything and we were having to work it out. We finally came up with what we thought was a good idea last week, then he announced on 2nd December that he’d nearly finished his Christmas list.

Christmas list? On 2nd December? Doesn’t he know Father Christmas needs to get organised a bit earlier than that?

‘Does Father Christmas have email?’

He knows the approximate budget Santa has for presents, so he has very helpfully gone almost up to the budget, allowing no room for surprises and the good idea we’d come up with.

His calculations are based on buying the items from Smyths, which he has researched and has worked out is the cheapest. With the 3 for 2. If Santa uses 3 for 2.

And he might be a big boy now but, yet again, he’s come up with something he’s never shown any interest in before. Skylanders. He hasn’t once played Skylanders or owned anything to do with them, but the entire list is Skylanders related. It relies heavily on Father Christmas taking advantage of the 3 for 2 offers. He’s concerned that if Father Christmas doesn’t do 3 for 2 he’s not going to get his full quota of presents.

‘When will Father Christmas do his shopping? Will it be when we’re at school and you haven’t got much work on?’ 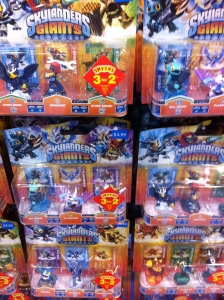