It was actually just before Christmas that I felt able to put Henry and Herbert the guinea pigs back in the same hutch together. But I’ve had other stuff on my mind and it’s only now I’ve got round to writing it.

I had to separate Henry and Herbert when we’d only had baby Herbert for a few weeks, as Henry was attacking him. The vet reassured me that by gradually reintroducing them on neutral territory, and putting their hutches close together where they could see each other, they would be able to get back together.

I brought them into the house in the run every day, and sometimes held them together too, so they could spend some time together. At first, Henry chased Herbert away a lot. Every time he got too close to him, we gently nudged him away. A couple of times I found Herbert actually sat on Henry’s back. He was quickly removed!

At first, they didn’t spend long at all together and I felt unable to leave them unsupervised. But giving them food seemed to calm them down, so I gave them a few pieces of vegetable and they were happy to sit and eat without bothering each other.

In some ways, having them in separate hutches was working OK. They could still see and ‘talk’ to each other, so they weren’t completely lonely. But I still felt they needed to be together. Plus, from my completely selfish point of view, having two hutches to clean is a bit of a hassle.

Then I took my eye off the ball. My dad was seriously ill in hospital with Covid and I had other things to worry about. In fact, I remember saying I can’t wait to go back to ‘just’ worrying about guinea pigs.

During that time, it seems the guinea pigs started to get on better. I was still putting them together most days, but my head was elsewhere and I wasn’t observing them like I had before. Herbert was growing fast, which I think made him seem more like Henry’s equal.

On the day my dad came out of his coma, I was filled with so much joy. The world suddenly seemed like a different and much better place. I finally got round to buying the waterproof and thermal hutch cover I’d been meaning to buy for ages. Then I gave the hutches a good clean and moved Herbert back in with Henry.

In the past, our guinea pigs have always shared a bowl. But as they’d lived apart for a few weeks and had been used to their own space, I thought I would give them a bowl each. Interestingly, I usually find one of the bowls empty, while the other still has food in it. I don’t think it’s one of them eating more than the other, I think they both like to eat out of the same bowl!

I’m pleased to say that Herbert hasn’t had any cuts since he moved back in. Henry is still the boss, but that’s OK. There is always one dominant male and that is generally the older of the pair of guinea pigs. The other guinea pig always relies on the older guinea pig and is happy to have them.

It’s also good for me to know that I can stop worrying about the hutch getting wet in heavy rain. A couple of times it got so bad that I literally had to bring it inside and dry it with a hairdryer!

It was a bit of a gamble moving them back in together, but it was definitely the right thing to do. 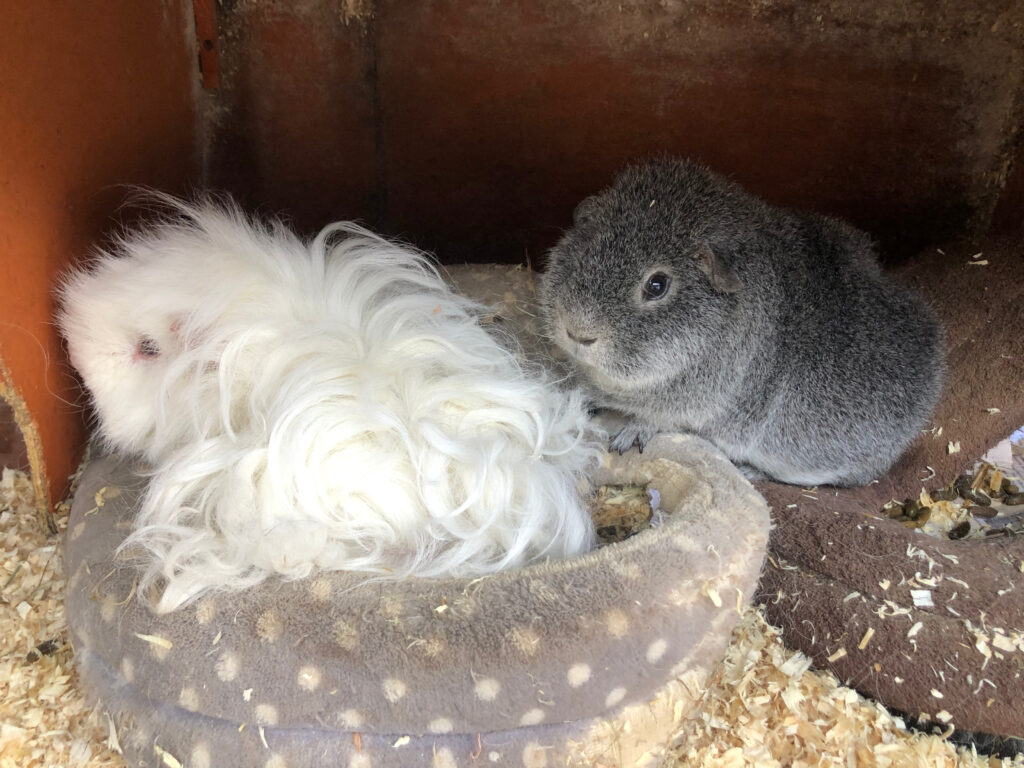