Not drinking alcohol wasn’t initially a conscious decision. My friends all started going to the pub in 6th form, and I went with them. Some of them drank, some of them didn’t. We were only 16 or 17, but this was the early 90s and the pubs were less vigilant than they are now. The bar staff knew some of our friends personally and knew exactly how old they were, but they weren’t bothered.

Pubs became clubbing. I used to go clubbing every week, sometimes more than once a week, during my 6th form and university years. And still I didn’t drink.

I used to try stuff and I didn’t like the taste of it. People would say ‘vodka doesn’t taste of anything!’, but it does. It tastes of alcohol. Alcopops on the whole came a few years later, but I do remember one drink that I was ‘definitely’ supposed to like, because it ‘tastes like Lilt’. It didn’t taste like Lilt and I didn’t like it.

As a student, I didn’t have that much problem with other people drinking, although I became less tolerant as I got older. Of course, people thought I was weird, but strangely my best friend at university didn’t drink either, so we were in good company.

I used to love dancing and my dancing used to attract quite a lot of attention – in a good way (I think). People were amazed that I could dance like that when I didn’t drink. But here’s the thing – dancing was my escape mechanism. When people are talking utter crap because of alcohol, what’s the best way to both get away from the conversation and appear to be loads of fun?! Dancing, of course! Generally, nobody thought I was ‘boring’ for not drinking, because I danced.

But I did get a few questions asked and I always just said ‘I don’t like the taste’.

Then when I was about 25, I realised I would never like the taste. That’s when I took a conscious decision that I was never going to drink. And I’ve never regretted it. 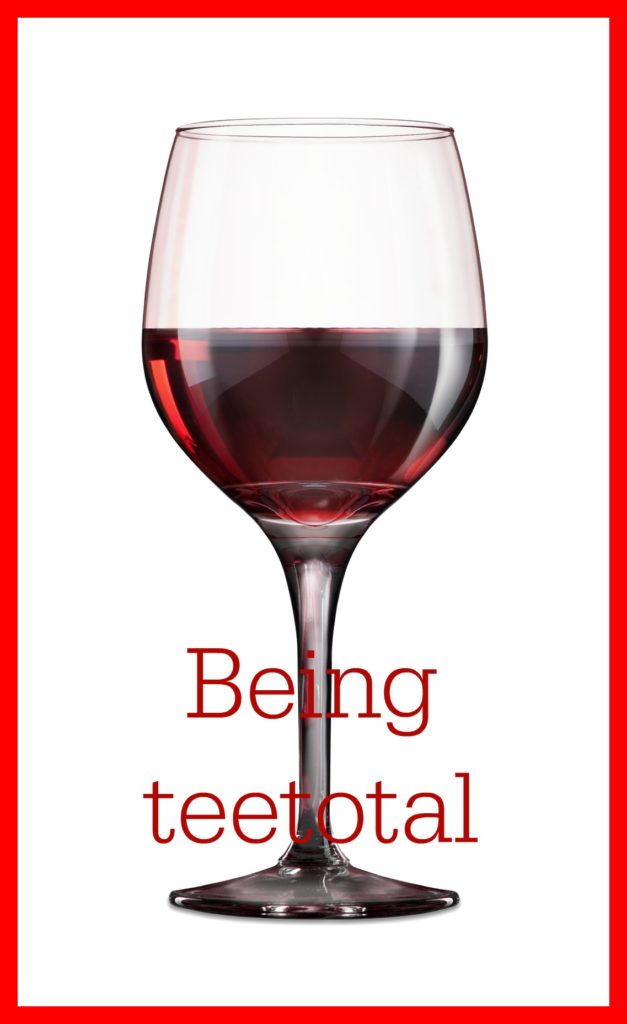 I’ve never known a hangover, never had the fear of wondering what I did or said the night before – who I argued with, who I kissed, who I said something embarrassing too. Have I missed out by not going through all of this crap?

Of course I haven’t.

I haven’t turned to wine to celebrate or to commiserate. I haven’t poured myself a gin because I’ve been feeling down.

How did I get through the tough days of early motherhood, not to mention parenting teenagers, without alcohol? I just did. I’m not saying that it wasn’t hard. But I didn’t need anything (other than chocolate) to make it better. I coped. My life hasn’t been a roller coaster of drinking and not drinking, of needing a drink, of having one too many, of regretting drinks, of thinking I could just have one more…

These days I hardly ever go out, so nobody questions me not drinking. Of course at my age, there are a few more of us who are teetotal than there was when I was in my 20s. And plenty who drink a lot less than they did in their 20s. But there are still plenty of people who like a few drinks – and sometimes more than a few.

I have very little time for the middle class mums’ ‘wine o’clock’/ ‘gin o’clock’ culture. I think it’s damaging to health. Actually, it is damaging to health. There’s medical evidence for that. And not only physical health, but mental health too. You feel like alcohol makes things better, but it actually makes them worse. It’s damaging to sleep, which in itself is essential for health. But that’s your choice.

Being teetotal does make parenting teenagers slightly tricky in the sense that I am quite afraid of them drinking. I know that teenagers drink, and that many of them do it very sensibly, but I would prefer that they didn’t drink at all. I have to rely on my husband to help me see sense on what is and isn’t acceptable. Luckily, so far, my boys have been sensible.

But I’ve made my choice for myself and I’m very happy that I have. You won’t ever see me with a drink in my hand. And know that if you ever see me dancing I am 100% sober.