One aspect of teenage parenting I got right

Home » Family » One aspect of teenage parenting I got right

Parenting teenagers isn’t easy. And I’ve got three of them.

My kids are a pretty good bunch. We don’t have any of the ‘serious’ problems of teenagers. No drugs, very little drink (the 18 year old, not the 13 year old!), no crime, no mental health problems. I’ve been lucky.

Because my kids are flipping lazy. They can’t as much as put a breakfast bowl in the dishwasher. I try, I really do, especially with the 18 year old. But he makes his lunch and it’s like he’s blind to all of the things he’s left all over the kitchen surfaces. I tell him to tidy up after himself and he manages about half of it. But what about that bowl, that knife, that empty baked bean tin? He doesn’t care.

I wish I’d done more to get them to do chores at an earlier age. Now I ask them to set the table and all hell breaks loose because why didn’t I ask their brother? But I only did it on Tuesday, she hasn’t done it this week… Setting the table isn’t really much to ask, is it?

And not only are they lazy and messy, they argue. Constantly. Sometimes the arguments actually lead to them physically lashing out at each other. My eldest doesn’t usually throw the first punch or kick, but he will throw the first nasty comment, until eventually one of his siblings will hit him or kick him.

The words ‘prick’, ‘dickhead’ and ‘arsehole’ are used a lot – nearly always by the younger kids to their big brother.

At times like that, I wonder where I went wrong.

There will always be someone whose kids never say a cross word to each other. People whose eight year olds load and unload the dishwasher every day without being asked. AND THEN COOK A MEAL FOR THE WHOLE FLIPPING FAMILY.

But finally, FINALLY I have discovered where I do better than other parents of teenagers.

OK, so it’s not a big thing, but I’ll take it. You have to own these wins where you can.

I have a little group of fellow parents (bloggers and lapsed bloggers) I talk to regularly on Twitter. I think we’re all a good support to each other. Some of the others have been through some tough times and they know that our little gang of Twitter mums is always there whenever they need us – for support or just for a laugh.

AND THEIR TEENAGERS USE A NEW TOWEL EVERY TIME THEY SHOWER. SOMETIMES THEY USE SEVERAL TOWELS A DAY.

My teenagers have one towel, which they use all week. Once a week, the towel will be washed, then it will be returned in time for their next shower. They don’t nick other people’s towels, they don’t use several towels a day.

What is my secret? I don’t know. That’s just always the way we’ve done things.

Now if only getting kids to put flipping bowls in the dishwasher when they’d used them was always the way we’d done things, I could be feeling pretty smug right now.

But it isn’t. I just have kids who will only use one towel at a time.

And my eldest leaves his damp towel on the floor every time. I didn’t say they were perfect, did I? 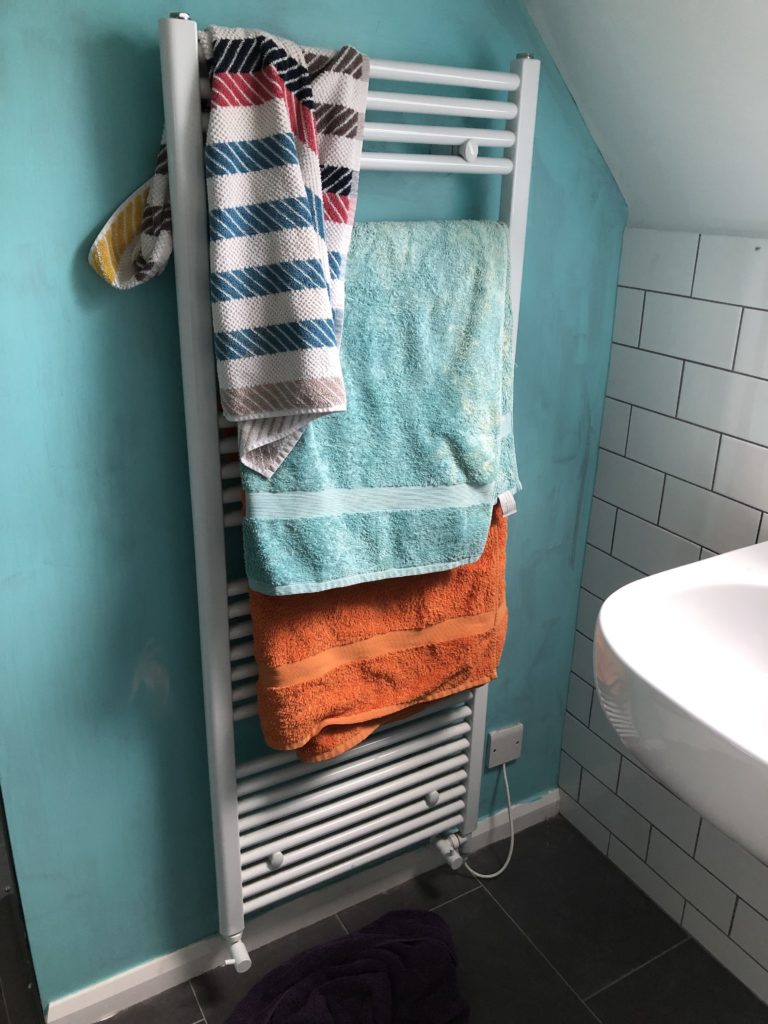