I guess it had been a few weeks that I’d been aware that Eric, our beloved guinea pig, had been getting a bit lighter. But when you pick him up nearly every day, and the change is so gradual, it takes a while to be sure. But, on the last Sunday of January, I was sure. So I gave him to my daughter to check.

And she was shocked. He’d definitely lost weight.

I could clearly feel his spine and joints at the top of his legs. His tummy didn’t feel solid and round any more.

So I decided to bring Eric into the kitchen for an hour or so every day to feed him. And, if I was worried in a few days, I would take him to the vet.

Over the next few days, I brought him in every day on his own and he ate pepper, carrot, broccoli and hay. On the third or fourth day when I slightly delayed bringing him the food, he actually shouted at me to bring and started stretching out to me for it. On the Friday, I even felt like his stomach was getting more rounded. 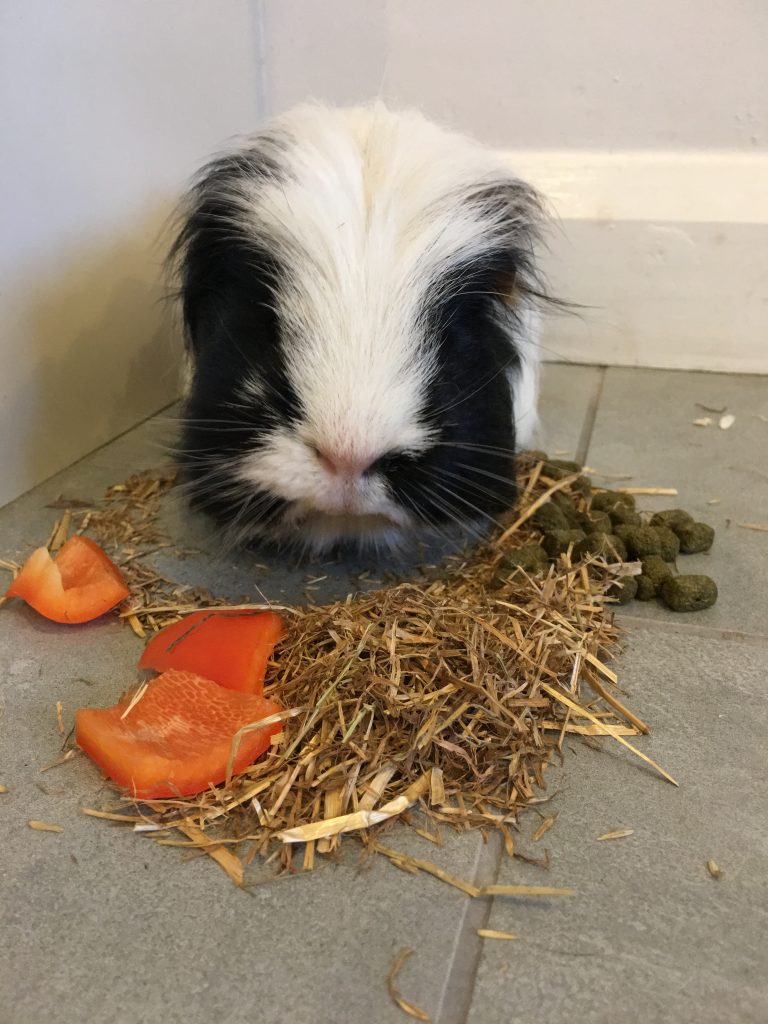 Eric has never been an active guinea pig. He has always been very calm and peaceful, the complete opposite to Wilfred and his predecessor, Daisy. You could leave Eric in the same place for hours and he wouldn’t move. The only thing he would run for was a shoe box in the middle of the grass. He could beat Wilfred in a race to get inside the shoe box any day of the week.

Because he was so peaceful, it has always been lovely to sit and stroke Eric. It’s very relaxing and calming. His long fur is so soft and shiny and he never makes any attempts to run away.

So I had no concerns that Eric was being less active, because that’s the way he had always been. I had one other concern though, for the last couple of months he had weed on the kitchen floor nearly every time we brought him inside. This was something he’d never done when he was younger.

I started to panic and tried to call the vet, but it had just closed. I would phone the vet first thing on Sunday.

When I woke up on Sunday, I wondered if he would even be with us any more. I went out to check on him as soon as it got light. I was so pleased to see my lovely boy was still alive.

My husband, ever the optimist, or maybe just because he was being kind to me, said it was only one day he hadn’t eaten. And look how well he had been eating every day for a week. The boys thought maybe he just wasn’t hungry.

So I brought Eric into the kitchen and offered him pepper. He took a couple of nibbles, then stopped. He didn’t want the carrot or the hay. So I phoned the vet.

Was it an emergency? Yes, I think it was. They agreed to see him within a couple of hours.

As I prepared to pack him into his vet box, I finally dared voice what I’d been thinking. But I couldn’t get the words out because I burst into tears. My eldest rushed over to give me the biggest hug, and I really appreciated that. It’s not often he does things like that, but when times are tough, I know I can rely on him.

‘I’m scared they’ll say he has to be put down.’

My husband was convinced they wouldn’t (or maybe he was just being kind). He told me I had to tell the vet about all the food he’d eaten in the kitchen over the last few day. I hoped he just needed some antibiotics. Maybe there was an injection of something magical that could just bring his appetite back and help him get stronger quickly.

As I took him out of the hutch to put in his vet box, I burst into tears again. What if it was the last time Wilfred would see him?

I was going to the vet on my own. I knew my daughter would go with me usually, but she was out with her friend. My husband had to go to pick her up and my eldest wouldn’t go with me to spare himself the pain. But, as I started to load him into the car, my eldest ran out and grabbed him out of the box for a final cuddle. He kissed him and told him he loved him, but he still wouldn’t go to the vet.