At Parkrun, all under 11s have to run with an adult. Over the nearly two years we’ve been doing Parkrun, my daughter has run with Daddy, her friend’s dad, her friend’s mum and her uncle, but mainly with me. At times, running with her has been difficult.

She wants to run fast and once hit the dizzy heights of a Parkrun in 29 minutes and 30 seconds, but generally she would run at around 35 or 36 minutes. And she hated herself for that. She wanted to run faster. And the more she wanted to run faster, the slower she got. She needed to change her mindset, to just think that she was out running and that was great. It didn’t matter if it took 29 minutes or 39 minutes, she was still getting exercise, fresh air and lapping everyone who was in bed.

But it all got a bit much for her and she hadn’t run Parkrun for a few months. I was hopeful she would get back into it. Of course her dancing is good exercise, but running is a different sort of exercise, which is good for stamina. With the complete lack of PE at her school, I thought a three mile run every Saturday morning would be good for her. But I didn’t push her. I don’t push the boys, so it wouldn’t be fair to push her either. It had to be her choice to run.

Then she turned 11 and she had the freedom to run on her own. Would she enjoy that more than running with me? A friend of hers turned 11 a few days after her. He’d never done Parkrun before as he didn’t have an adult to run with him. He was determined he was going to run as soon as he could. I knew this friend wouldn’t be particularly fast and I also knew he would keep my daughter’s spirits up. They would be the perfect running buddies.

So, along with her best friend, my daughter did her first adult-free Parkrun. The three of them chatted and giggled their way round. They finished in 39 minutes and not once did my daughter worry that she was too slow. It didn’t matter! She was running and getting exercise, while also having fun with her friends. When I looked for her in the distance, I couldn’t see her. Until I saw a blur of small people several hundred metres of way. One of the blurs dabbed and one of the blurs did a cartwheel. That was my girl and her friends!

She felt really happy with herself for having done Parkrun again and is definitely going to stick at it from now on.

As long as her funny friend runs too. 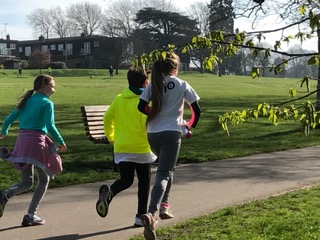