Driving for 5-10 year olds with Young Driver and Firefly

Lessons in the only electric car designed specifically for younger children took place at Cheltenham Racecourse for the first time in January – and my daughter was one of the first kids to put it through its paces. So on a rainy morning, she was given a briefing by one of Young Driver’s instructors, before getting behind the wheel of the Firefly. 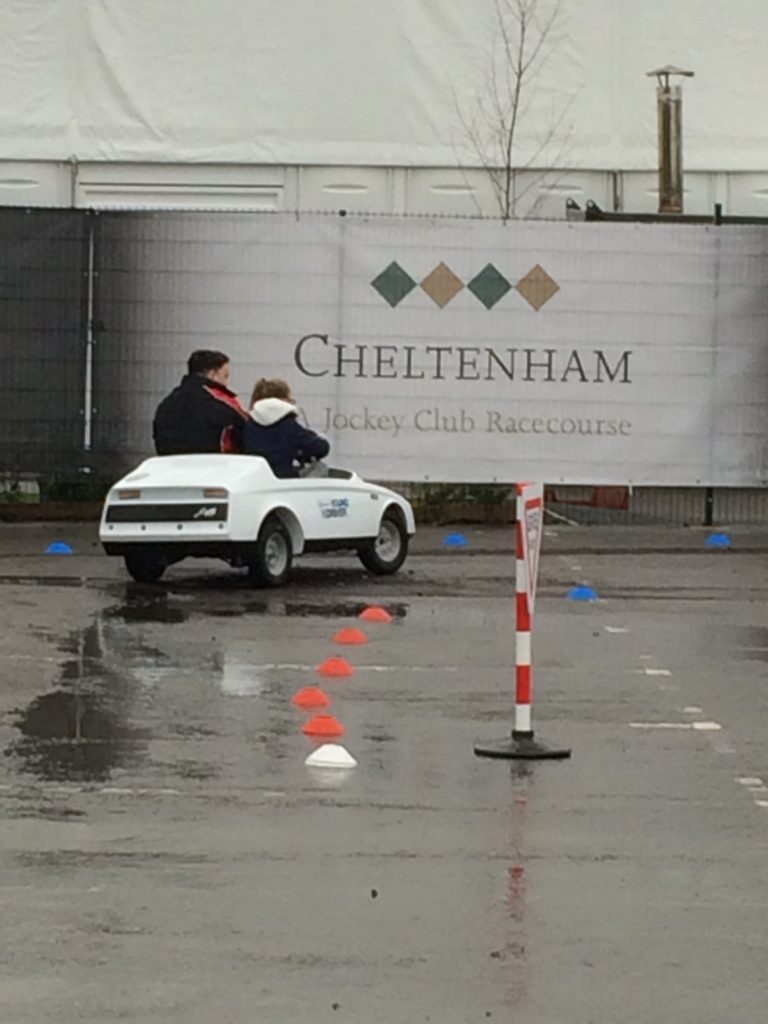 The instructor sat with her while she drove a few circuits of the specially created course, making sure she used her indicators and followed the road signs. Once he was confident she could hold her road position well, he let me join her. The cars drive at just 5mph and I was showed where the ‘stop’ switch was, in case of emergency. The instructor was also nearby with his own remote shutoff system in case things started to go wrong. 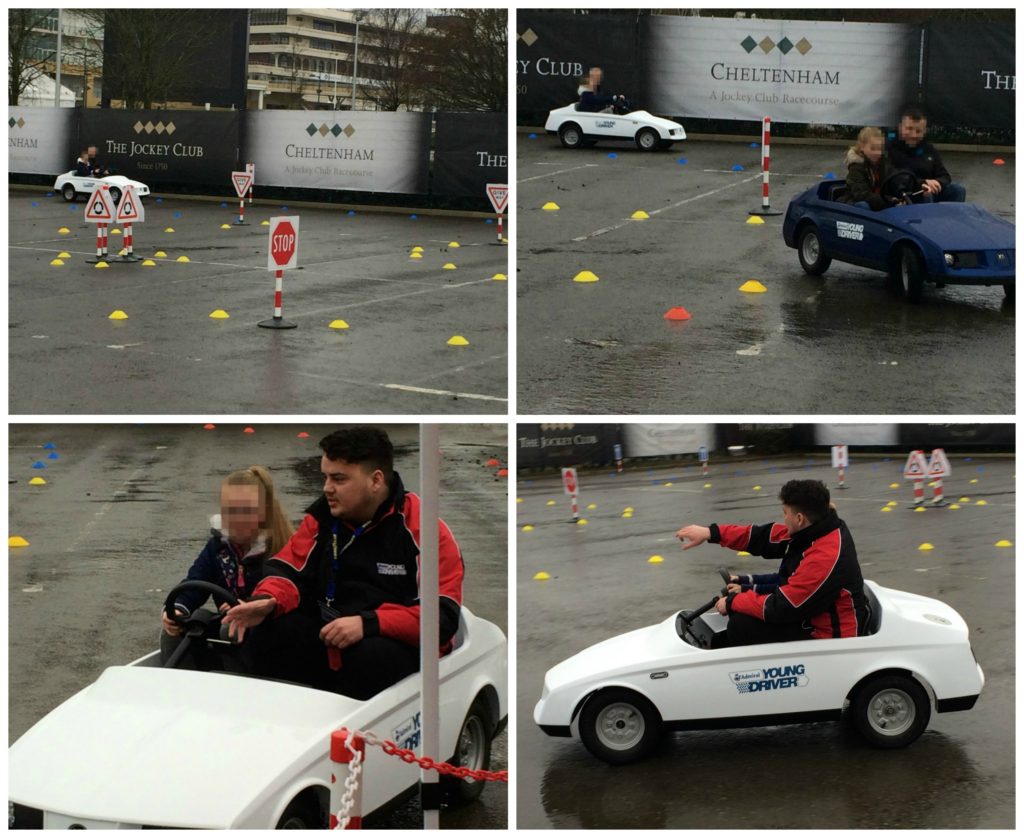 I’m pleased to say nothing went wrong. I was impressed by how much my daughter had picked up in a few short minutes. She remembered to give way and stop at the appropriate signs, used her indicators and even tackled a mini roundabout and did a bit of reversing. I felt perfectly safe and she loved driving me around.

“Probably better than you,” she said.

Possibly. I am a bit crap, but I have been driving for over 25 years now, so I’d like to think my 10 year old daughter isn’t actually better than me just yet!

Lessons cost £19.95 for 20 minutes. The instructor told me that kids tend to start losing concentration towards the end, so 20 minutes is plenty. Although the age range for the cars is 5-10, everyone I saw there was closer to 10 than 5.

The instructors also told me that they’d created the Firefly especially for younger kids, who sulk a bit while their older siblings are having a lesson in one of the dual control Skoda Citigos. In fact, one of the children who came along while my daughter was there was in that exact position – and they’d booked lessons so he could watch his older siblings in the Skodas and they could watch him in the Firefly.

If you want your kids to learn a healthy respect for driving and the road from a young age – as well as to have fun, a Young Driver lesson in a Firefly is a great experience. 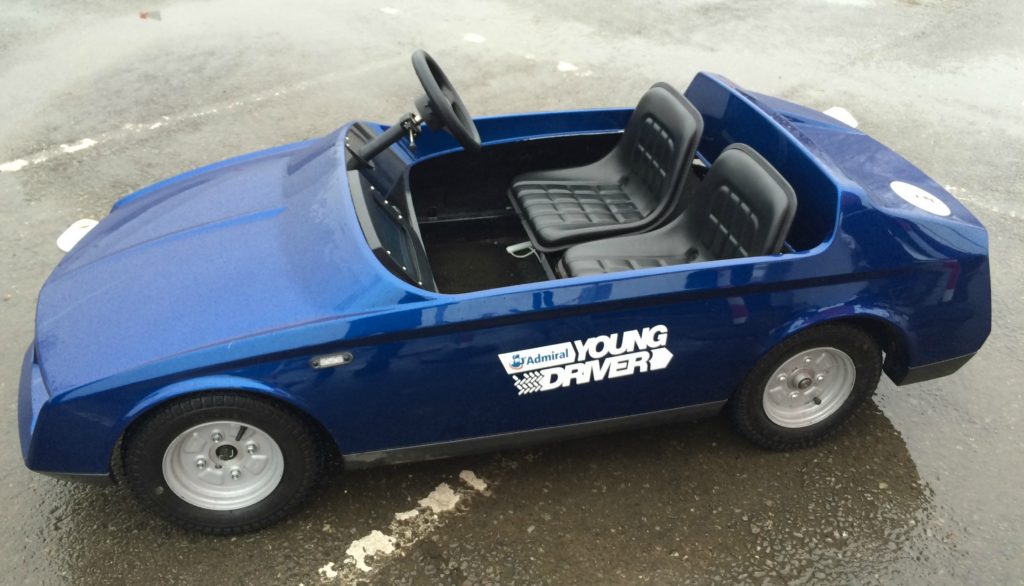 Designed, engineered and manufactured in the Midlands, Firefly is the brainchild of Young Driver Motor Cars Limited, a division of Young Driver, the UK’s largest provider of pre-17 driving lessons. While Young Driver has already provided more than 400,000 lessons for youngsters aged 10 – 17, it became clear that there was nothing suitable for those aged under 10 to drive. The creation of Firefly means that Young Driver can now offer lessons specifically developed for this younger age group.

The first two-seater Firefly cars were revealed in pre-production prototype form in April at the Gadget Show Live, when over 1,000 youngsters put the four prototypes through their paces. Since then, the company has continued to develop, test and refine Firefly, working with leading designers and UK automotive suppliers to create the finished product which handles and drives like a full-sized car.

Firefly is powered by a state of the art electric drive train featuring twin electric motors enabling a top speed restricted to 10mph. The car can, however, be set to a Junior or Experienced mode. An innovative (patent pending) and optional safety system uses sensors to detect obstacles in time to bring the car to a halt when it is operating in the Junior mode, which also limits speed to 5mph. Working in forward or reverse modes, this is supplemented by a remote control switch which enables adults to stop the car from up to 120 metres away in case of an emergency. The automatic sensors and 5mph speed limit are deactivated in the Experienced mode, but the remote control is still operational.

The driver’s seat can be adjusted, allowing most youngsters aged from five to 10 to reach the pedals. An adult of up to 6ft can also drive, or be a passenger within the vehicle.

Whilst the product was initially developed for use by Young Driver, it will also be available for purchase worldwide by members of the general public from 2017 with a price tag in the region of £5,750 + VAT.

Kim Stanton, who heads up Young Driver, said: “Firefly is something very special, it’s a real car in its own right, designed, engineered and manufactured in the Midlands. We know that youngsters will enjoy driving it and that through this they will learn about road safety, finding out about the basics of driving and gaining a better understanding of how it feels to be behind the wheel. That can only be of benefit when it comes to them being pedestrians, cyclists and future motorists out there on the roads.”

For more information about Young Driver and Firefly and to book a lesson visit http://www.youngdrivermotorcars.com

My daughter was given a 20 minute driving lesson in a Firefly with Young Driver for the purposes of this review. All opinions are our own.