Why I won’t knock Pokemon Go

A week ago, I hadn’t even heard of it. Now it seems I’m hearing of nothing else. From out of nowhere, Pokemon Go is the most successful mobile app of all time. My younger son started talking about it excitedly last Tuesday and he downloaded it on Thursday, when it was released in the UK. He’s been playing it and talking about it ever since. And I love it!

Because it’s getting him active and enthusiastic.

Yes, there are those who say it’s preferable for kids to go for a walk and look at nature, rather than a phone. And of course that’s great. But how many tweens do you know that choose to go for a walk to look at nature? The fact is, if they weren’t playing Pokemon Go outside, they would be indoors staring at a screen.

I’ll be honest, I was worried about my son over the school holidays. He thrives on school – the academic side, the social side, the sport, the drama, the house rivalry… It’s what makes him tick. It gives him his spark.

Without school, a bit of that spark is dimmed. He doesn’t know what to do with himself. So he retreats to his default position of playing games and watching YouTube videos. Sadly, I can no longer get him to adhere to the screen time rules I set a year and a bit ago. Now, if he’s got no homework, he’ll be looking at a screen.

He does go out with the family, whether that’s for a day trip, a walk or just to the supermarket. But I have to work over the holidays, I can’t constantly be taking him out or dropping him at friends’ houses, some of which are miles away. Apart from his Scout camp and our holiday, I envisaged him spending most of his time looking at his phone and his iPad (yes, he multitasks and uses them both together). I wasn’t happy about that, but I didn’t know what else I could do for him.

And then Pokemon Go came along. The timing couldn’t have been better.

He’s out hunting for Pokemon and, when he’s not looking for them, he’s walking to get his distances up so his eggs hatch! There are 2k, 5k and 10k eggs to hatch. Our village has two Pokestops and a Gym, so there’s lots going on (if you don’t know what they are, ask a 12 year old!).

We’ve talked to him about safety. He knows not to look at his phone as he’s crossing the road. He knows not to go to the churchyard or the local park in the evening or on his own. Because you can be sure that if he knows there’s a Gym in the churchyard, the paedophiles do too. When he suddenly realised there was a lot of activity going on at 9.45pm on Saturday evening, my husband was happy to take him out in the car to collect whatever it was he needed to collect.

And it’s not just about my son. I love looking out of the window and seeing all these people walking around who would never normally walk – not just groups of teens and tweens, but small children with their parents, groups of young men or couples in their 20s. They’re all happy, they’re breathing fresh air, they’re feeling the warmth of the sun and they’re getting exercise.

And I’m definitely not going to knock that. 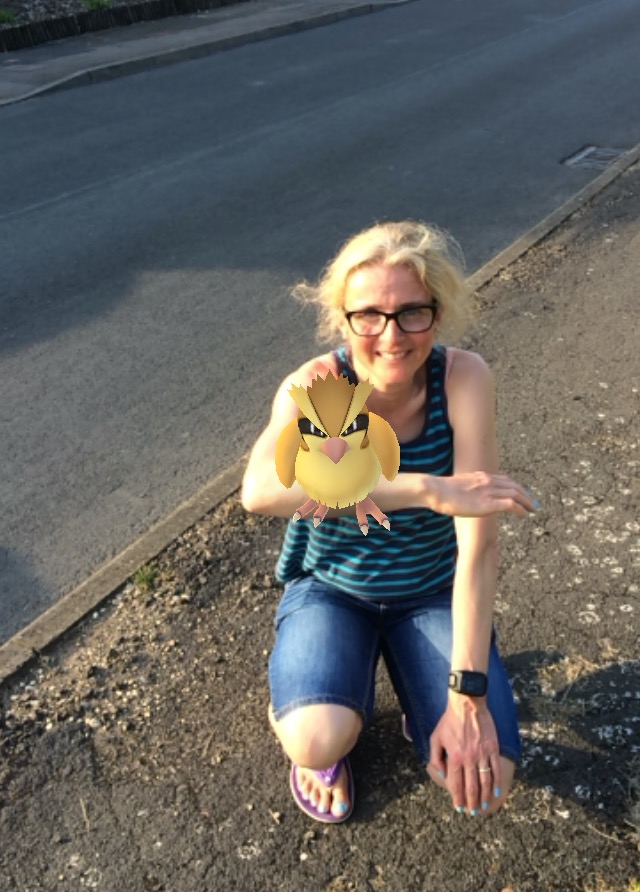