A parents’ evening to be proud of

Home » Family » A parents’ evening to be proud of

Earlier this week, we had my younger son’s first secondary school parents’ evening.

His first test was to arrange all of the appointments himself – quite a task for a slightly disorganised 12 year old. It wasn’t until the actual afternoon of the parents’ evening that I found out who I was seeing at what time.

He’d been unable to make an appointment for German (one of his favourite subjects) and we weren’t worried about seeing his teachers for DT, Drama or IT, all of which he is doing very well in, according to his recent report.

He had made the appointments for five minute intervals(!), which made the start of the parents’ evening rather stressful, especially as the traffic had been bad and we’d arrived without a second to spare.

I waited by the PE teacher, but he was busy and the time was ticking dangerously close to the Maths slot, so I had to skip straight to Maths.

‘Did he tell you what he got in his last test?’

My son is pretty good at telling us stuff. A lot better than his brother ever was, but he doesn’t tell us EVERYTHING. To be honest, he hadn’t even told us he’d had a test. I think they have quite a lot of tests, so he probably doesn’t see it as worth a mention.

He’d got 66 out of 90, which is pretty low. Very low for a boy like my son. He’s always had a very mathematical brain. The teacher knows what he’s capable of and had felt this was too low too. His other marks had all been very good. He advised us on ways my boy could prepare for a test – using his textbooks and going online to the school website which has exercises to do.

My boy is very good at doing homework and will always do it to the best of his ability. He’s produced some stunning work from Art to French to English to German. But he doesn’t tend to go beyond that and do research or learning just for the fun of it. Sadly the lure of YouTube, Instagram, gaming and The Simpsons is too strong.

Time was running away from us and it was clear we were risking missing our Science slot if we saw the RE teacher. And we still hadn’t caught up with PE. We skipped RE and headed straight for Science.

‘Did he tell you what he got in his last test?’

100?! That’s the boy we know and love! The teacher couldn’t sing his praises highly enough – for his achievement, for how hard he works, for how well he engages in class and for the way he works things out. She says he’s the very top of the class and she can already tell he’d be the ideal candidate for A Level Physics! I couldn’t have been more proud.

While we waited for the Music teacher, we sneaked in to see the PE teacher. He couldn’t praise my son highly enough, either. He’s so pleased with his rugby. He says he’s a natural sportsman and a lot of the boys look up to him, seeing him as a natural leader. This was so lovely to hear. They will be playing cricket after Easter, which my son has never really played, but his teacher expects him to make the A team based on all-round sporting ability.

Time was ticking on again, so we had to miss out Music and head for English. His English teacher was very pleased with him on the whole, but said he had slipped slightly recently. She said he just needs to check his work a bit more carefully and he needs to read more! She says she can tell the kids that read and those that don’t. I’ve been trying to persuade him to read too, but to no avail. When he gets into reading, he reads quite obsessively, but then he will finish a series of books and will struggle to find something new to read. In year 6 he read all the Percy Jackson and Darren Shan books, but hasn’t read since last summer. He’s got a lot of books in his room he has never read. We need to get him back into it.

My son doesn’t talk much about History, but his teacher thinks he’s brilliant. He did really well in a recent assessed essay and she said she could tell he had done the reading beforehand to prepare, which a lot of children hadn’t. Like most subjects, he is performing above expected in all aspects of the subject and she awarded him a 1 for effort because he works hard and engages well in class.

My son was one of only two children in his Geography class to be assessed as being above expected in all three aspects of the subject. He seems to really understand Geography, which my husband is very pleased about, as that’s his thing.

French is the one subject my son told me recently he struggles with. He absolutely loves German and really understands it, but he doesn’t get French. His teacher knows how he feels (she raised it before I did), but she says he’s doing fine. He’s not the top of the class, but he is in the top half. He got 42 out of 55 in a recent, very difficult test, in which they had to get every French spelling spot-on. Lots of children got marks in the 20s and 30s. She advised he read on ahead a bit in his textbook to help him feel more confident and prepared for the lessons, but he has nothing to worry about!

My son has never shown any interest in or aptitude for Art. Yet we’ve been blown away by what he has produced since he’s been at grammar school. He seems to like the academic side to it – he’s learning about an artist and not just drawing something for the sake of it. He’s had some incredible ideas and produced some good pieces. His teacher said he has a real talent and could do really well in the future. I must admit, I was very surprised, but very proud. 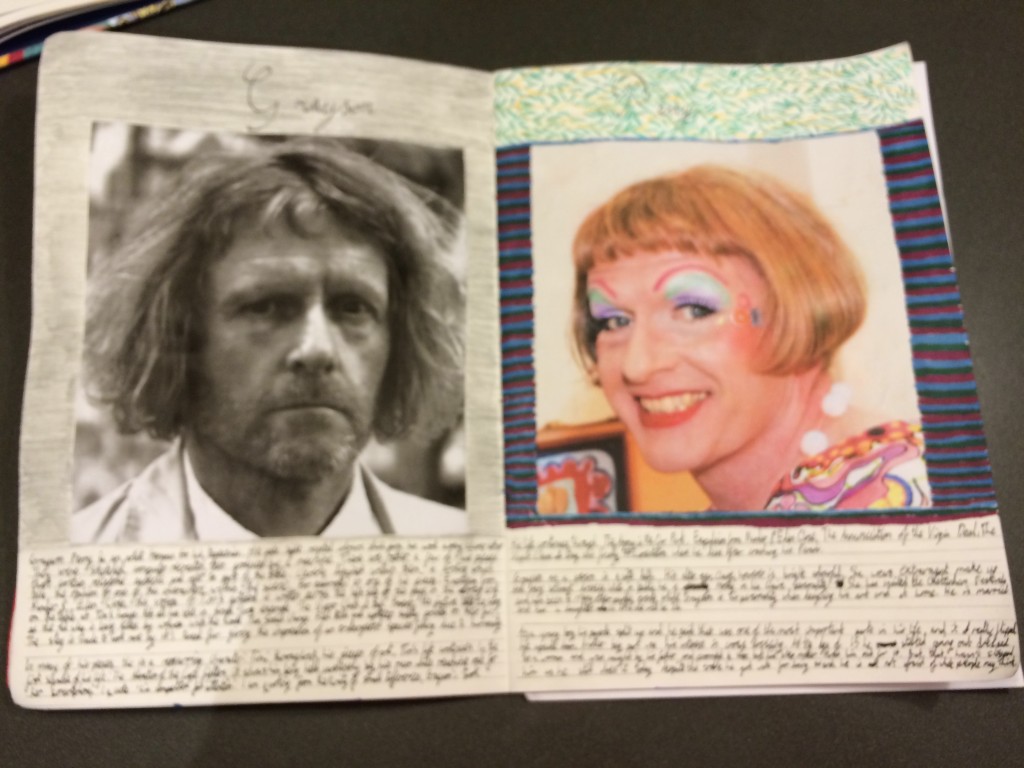 Despite, our best efforts, we never managed to catch up with the Music teacher.

So that was it. A parents’ evening to be proud of. My son is at a highly selective grammar school, one of the top state schools in the country. Achieving ‘above expected’ is not above expected for an average year 7, it’s for a year 7 at his school. In his last school report, he was above expected in 40 out of 45 areas. He is top of the class in many of his subjects. That is an amazing achievement and I couldn’t be more proud.