My daughter has taken part in a couple of local dance festivals with school lately. They’re a chance for primary schools in the area to get together and perform dances they’ve choreographed to a paying audience of parents in a prestigious venue.

Regular readers will know that my daughter is a brilliant dancer and I’ve seen her dance many, many times before. The school dance club is mixed ability and is made up of pupils in years 2-5. It is taught be regular teachers and TAs. The dances are not exactly challenging for someone like my daughter. If I’m honest, she doesn’t even enjoy it that much, but someone as dedicated to dance as my daughter can’t miss any opportunity to dance.

My head told me I didn’t need to pay money and miss out on work time to watch her dance in a school dance festival. But my heart told me I would be kicking myself if I didn’t go. Both times I left it until the morning of the festival before admitting to myself that I would be going along.

The first festival was at the local theatre, which is VERY grand. It’s fantastic for children to be able to perform somewhere like that. My seat was pretty bad, but I got a good enough view. Good enough to see my daughter’s mega-watt smile (she learned the art of smiling all the time in panto and it’s worked really well) and slick moves. As ever, she stood out a mile – so much sharper and more professional than the others. She’d talked the dance down beforehand, but it was better than I’d expected and I was so glad I’d taken the time to watch her.

The second festival was the one my daughter had told me not to bother with. I’d been to the same festival last year and it was the dance she’d already performed at the theatre. I spent days beforehand deliberating and still couldn’t decide whether or not to go on the morning, but then I realised I was just being stupid. It might be a simple dance, it might be the same dance, but I wanted to see her and I wanted to support her.

At this festival, the dance is performed on the floor in the round. I was stressed about where I should sit. What if I only saw her back? I moved from one side of the room to the other, hedging my bets that I would get a sideways view rather than a back view.

You could really see the talent shine in some children. In others, you could see the sheer enthusiasm and excitement as they tried their best. Some dancers were in time, some were out of time. There was a mixture of dance styles and music, some costumes which had taken a lot of care and attention and some which hadn’t.

But none of it really mattered. Because the kids were enjoying it and so were the parents.

The infants doing Let It Go were so cute. And the infants dressed in animal onesies for I Just Can’t Wait to Be King were beyond cute. There was a ripple of excitement among the kids in the room when it was announced that one group would be dancing to Justin Bieber’s What Do You Mean (I’m sorry, I still don’t get the Bieber thing even though it’s OK to like him now) and some awesome dancing to Sax.

But nothing could beat the children from a special school dancing to Cotton Eye Joe. Some of them holding hands with teachers and TAs, they stomped their little hearts out and the whole audience clapped along with them. I’m pretty sure more than one or two tears would have been shed.

And there was our school, of course. Luckily, I’d called it right with my choice of seating. It was a sideways view, but my daughter was closer to me than any of the other dancers from her school. And she nailed it again. I was just so proud to see her, giving it her all as ever, with her plaits flying and her moves sharp and slick. She really is an awesome dancer. 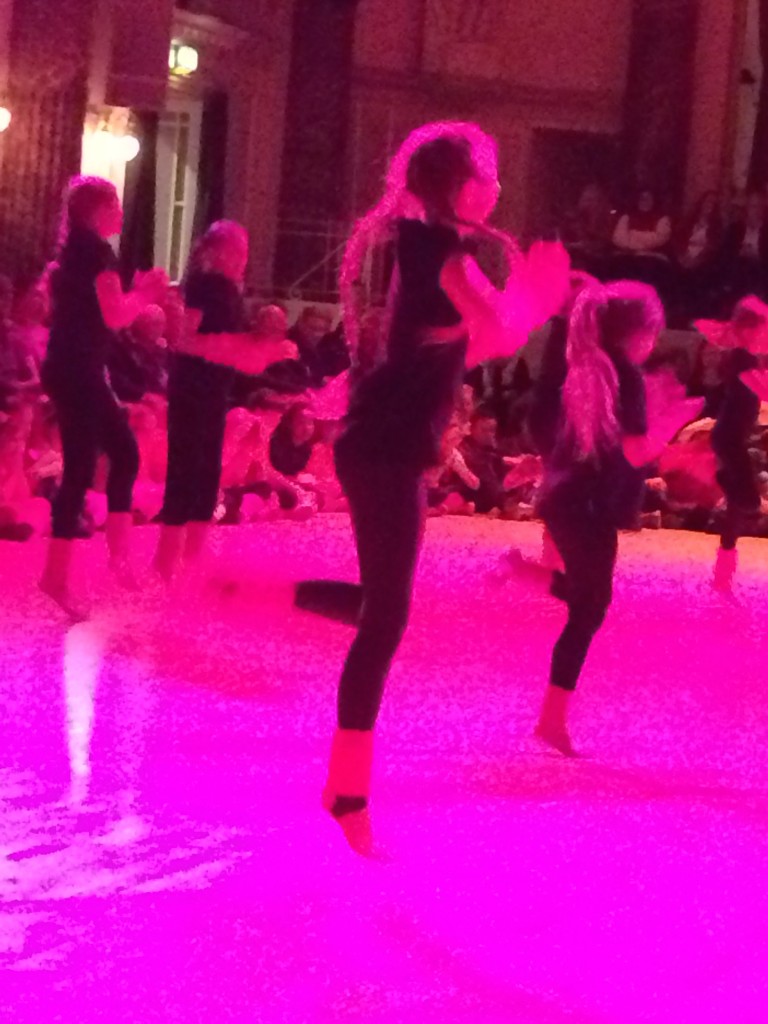 School dance festivals are a great idea. Kids don’t have to be brilliant dancers, or even good dancers, to take part. They just need to enjoy dance. To see a special school taking part too just shows how inclusive they are.

And if I get the chance to go again next year, I’m not going to question it, I’m just going to go. Because I realised how much I enjoyed watching. Not just my own daughter, but all the other children from the other schools too.

In a week’s time, will I regret the couple of hours of work I didn’t do that day? No. But would I have regretted not seeing her dance? Yes.

Thanks to Cheltenham and Tewkesbury School Sport Network for organising the brilliant FeetFirst DanceFest.