The panto: Final week of rehearsals

For two weeks, my daughter had rehearsed 4.30-6pm after school, then for three hours on Saturday. It was surprisingly tiring (for me, more than her). We had a real rush to get there on time and, being rush hour, there was no point in me going home. So I was stuck in a sort of purgatory. I was good and made the best of it by doing work. I work on a lot of educational materials involving kids’ books. I must have looked a strange sight, sat on my own in a pub reading kids’ books and endlessly sticking post-it notes on them. Then I would get home and it would be late and everything would feel like a big rush.

My daughter took those first two weeks in her stride. In fact, she didn’t just take them in her stride, she thrived on them. At home, she practised her routines and sang her songs and excitedly told us what she’d been doing. She missed rehearsals on Sundays, the one day off a week.

When anyone said she must be tired, she denied it. She most definitely was NOT tired.

But then it stepped up a gear.

The final week of rehearsals aka production week was something else.

This was the week she had to take time off school. (You may be surprised to discover this is perfectly legal and above board. There is official paperwork – a ‘performance licence’, just like professional child actors in films and TV would have).

The first day, 2-6pm didn’t seem too bad. The second day was a doodle – the old 4.30-6, with me sat in my purgatory with a children’s book and post-its in the pub (I sit in the pub not because I particularly like sitting in pubs alone, but because the rehearsal room was upstairs in the pub). 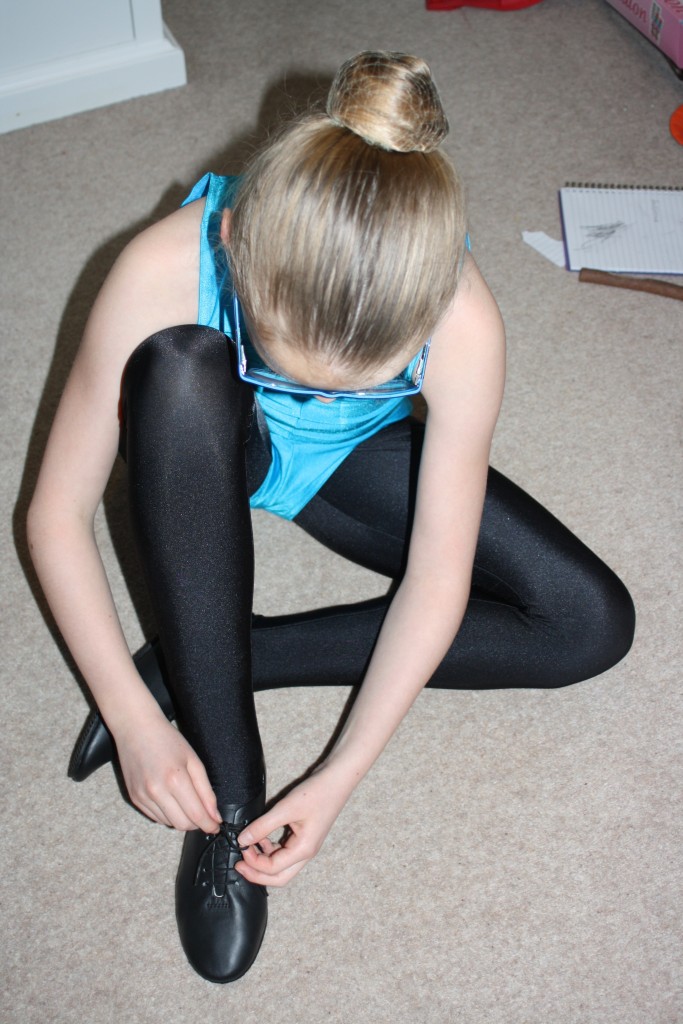 And then came the tech rehearsal.

I took her out of school at 11.45 and gave her a cooked lunch. She plaited and sprayed her hair to perfection (nearly asphyxiating me in the process) and was buzzing to go.

She was gone so long that I missed her.

A very different girl came home at 9.30. Tired, grumpy and not feeling great. (I suspect the hairspray hadn’t helped, but she also hadn’t eaten enough.) The day had been long and pretty boring with a lot of waiting around, as things had to be tried and tested over and over again.

I felt evil getting her up the next morning as she was so tired (and my daughter doesn’t generally get tired). And the worst thing was – she had to do it all over again!

She was chirpy when I dropped her off for her second technical rehearsal, but I was dreading the state she would be in when she came home. I found myself counting the hours – how long she’d been gone, how long until she would be back.

I was pleased (and surprised) that she came home chirpy. They’d been kept a lot busier and she’d enjoyed it much more. She woke up happy too.

And so to the dress rehearsal. Rehearsal number 17 of 17. The end of three weeks of intensive work. In comparison to the technical rehearsals, the dress rehearsal felt like a bit of a doddle at only 2-6pm. She wanted to have her school dinner before she set off, which turned out to be a bad idea as we had to do hair and make-up, not to mention driving and parking, before rehearsals. My mum came to help with (do) the make-up and she had to do her immaculate plaits in the car. Plaits done in the car are never immaculate, but they were remarkably good considering.

The dress rehearsal went well, apart from the little girl she shares a line with failed to make it onto the stage to say her line – the fault of the chaperones, not the girl.

My daughter came out happy and chatty, but then was moaning on the phone to my husband that she felt tired while we were still driving. Which was unfortunate as we were going straight to watch my son’s school musical. In retrospect, that was a bad decision as my husband had to take her home in the interval, missing my son’s small contribution to the musical.

Now she just needed to sleep (definitely no Parkrun!) so she could feel on top of the world, ready for her opening night.