Earlier this year, we went to Wembley to see England. It was a fantastic, family-friendly experience that I would recommend to anyone – face painting, pre-match entertainment, great seats AND an entertaining game. What more could we want?

So when we went to see England v Estonia, the final home qualifier for Euro 2016, last week we had no reason to expect it would be any different.

Well, I did have a reason. It was a school day. And we had to get all the way to Wembley after school. In Friday rush hour.

When we went before, it was fortunately the last day of term and the kids finished school a bit early. This time, we weren’t so lucky. Both boys get home from school at around 3.45 or 3.50 and we set off at 4. So we had 3 hours and 45 minutes to get to Wembley, about 90 miles away, and into the stadium in time for kick-off. It should have been no problem.

But never underestimate the rush hour.

We got through Oxford pretty well. Yes, we queued. But queueing in Oxford is pretty much par for the course 24/7. Once through Oxford, we thought we had it nailed. My daughter was keen to visit the London Designer Outlet just opposite the stadium. We thought we’d arrive at Wembley at about 6.30 and would be able to nip into the shopping centre before getting into the stadium in good time for face painting and absorbing the atmosphere.

But then the traffic stopped. For half an hour.

There had been a four car shunt which had shut the motorway temporarily while it was cleared. Maybe we wouldn’t get to the shopping centre. But it was all fine.

As we approached the North Circular, the traffic slowed right down. It was barely moving. Time was ticking on. We were five miles from Wembley. We had 45 minutes until kick-off.

We turned off the A40. We were just two or three miles from the stadium. But could we get there?

And still we crawled. And stopped.

We listened on the radio to Wayne Rooney being awarded his golden boot for being England’s top scorer. As big Man Utd fans, my family would have loved to see that. We also heard on the radio how 80,000 tickets had sold, but there were still lots of empty seats. Well we could definitely vouch for five of them.

Wembley would loom into view, then it would disappear behind some buildings. The traffic lights would turn green and nothing would move.

The game kicked off. And we were still in the car with no real idea where we were or how long it would take to get there.

Eventually, in the shadow of Wembley, me and the kids jumped out of the car, while my husband drove off (slowly of course) to the parking space we’d booked in advance.

We went into the stadium and up an escalator. I didn’t remember that from last time. Nor the next escalator or the one after that. 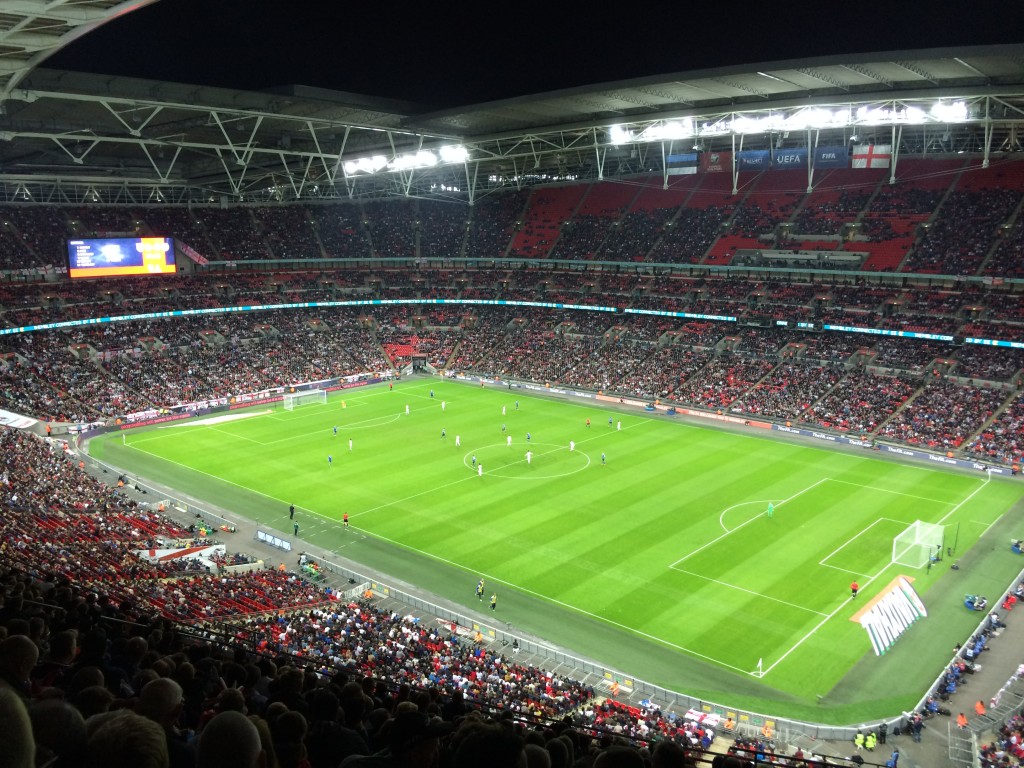 Twenty minutes of the game had passed, but at least the score was 0-0. My husband arrived after 33 minutes and an argument with the parking attendant. He’d been told there would ‘probably’ be a space. When you’ve paid £30 in advance to get decent parking, that’s not what you want to hear.

A couple of kids behind, no more than 10 years old, swore all through the match – repeatedly saying ‘shit’, as well as ‘grab him by the balls!’ and ‘tosser’. I cringed every time and wondered why nobody was telling them off. But their parents clearly didn’t care.

Finally, on 45 minutes, England scored, but it hadn’t been a particularly exciting performance and the atmosphere in the stadium wasn’t great, not helped by our stressful journey.

At 77 minutes, with the score still at 1-0, people started to leave. We usually plan to leave a game at 85 minutes to beat the traffic, but 77 minutes was ridiculous! And more and more people kept leaving. There’s no way we could risk a return journey like our journey to get there. There was only one thing we could do. If you can’t beat ’em…

So at 80 minutes, after my husband had seen precisely half a football match, we ran down about 20 flights of stairs and dashed to the car to beat the traffic.

We heard the cheers as the second goal went in as we sprinted to the car park.

It had been a thoroughly miserable trip, which the boys had delayed a Scout camp for. We know how amazing a trip to Wembley can be if it all works out, but would we go again after school?