I live with a bunch of football fanatics. Not just my younger son, who plays football, but also my husband (who coaches, plays and supports) and my daughter, who is probably the biggest armchair fan of all my kids. I don’t generally watch it myself, but used to watch it pre-kids and understand that football is a big deal for my family. I won’t ever stop them watching it (although I do sometimes question the need to watch something like Tottenham v Southampton when they’re Man Utd fans).

Anyway, I digress before I’ve even started. My kids have been to watch Man Utd, they’ve been to watch Cheltenham Town (and my had an amazing time as flag wavers), so my husband thought they ‘needed’ to go to Wembley to watch England. 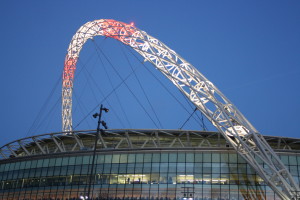 Sounds expensive? Actually, it was cheaper than most Premier League games. Adult tickets were £20 each and the kids’ tickets were a tenner. You have to be a member of the FA to get tickets, but apparently being a member is free anyway.

So we went to see England v Lithuania in the qualifiers for Euro 2016. Yes, I went too.

What did I expect? I wasn’t sure. But I know that the whole thing was a much better experience than I’d imagined it would be.

Parking wasn’t cheap, but we pre-booked a space right by the stadium which ensured us a quick getaway.

Wembley Stadium is a truly stunning building. It really has to be seen to be believed. Inside, everything is very clean, and despite there being A LOT of people there, queues for food, drinks and the toilet are short. The merchandise was surprisingly good value too – £8 for a hat and £8 for a scarf seemed pretty reasonable to me. Being in the family stand, there was no swearing or anything horrible. And there were face painters! How lovely. Ladies are there specifically to paint faces – of kids or adults or anyone who wants it – for free. 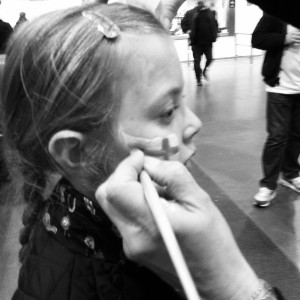 My husband had said our seats were on the third row. How exciting! Even for someone who’s not a big football fan, walking into Wembley almost takes your breath away. It’s hard to describe, but it just looks so perfect – perfect green playing surface, perfect red seats. And it’s just so huge! It was incredible to think those seats would fill up, but they did!

When we got inside, we realised my husband had made a mistake about our seats. They were on the FRONT ROW! Right behind the goal! What better place for kids to sit to soak up the atmosphere?

There’s plenty to keep you entertained before kick-off – with the players coming out to train, a marching band and Three Lions coming out to high five the kids among other things.

Before we knew it, the game had kicked off. England were shooting into the other goal and we realised the downside of our amazing seats – we couldn’t see a lot at the other end! From where we were sat, it looked like Rooney had scored within three minutes, but the reaction of the crowd showed he hadn’t. A replay on the big screen was very helpful in showing us he’d hit the post. But three minutes later, he didn’t miss! The crowd went wild.

What an amazing thing to see England, Rooney no less, score at Wembley within six minutes of the game kicking off!

Then my phone went. And it went again. So did my husband’s. People were texting to say they’d seen us on telly!

On the radio later, they described Lithuania as being dreadful opposition. They weren’t. But it was great that an England win was never in doubt.

The second half was more exciting as it was all happening right in front of us. We could see Rooney in action just metres away (yes, Rooney is the only England player I know these days!). Another goal, then Rooney went off and Harry Kane came on. Even I’d heard of Harry Kane.

To be fair, he was amazing. He scored within about 18 seconds of coming onto the pitch. (Although I thought they were a bit premature on the radio talking about him as possibly overtaking Rooney’s record scoring for England, having played less than a quarter of a game and scored one goal!).

It was a really fantastic experience and I would recommend it for all football fans, and even parents who aren’t big football fans. I think you would be as pleasantly surprised as I was!