The Scout camp (missing my boys)

Sometimes, I wake up in the early hours and I miss them so much I can’t bear it. I am overwhelmed with it. I want to get out of bed and run around the house screaming, because I want them back.

At other times, I quite enjoy them not being here. Life is more relaxing – no arguing, less noise, less mess, more time to spend with my daughter and for myself.

I’ve been dreading this time since they signed up for the camp over a year ago. Having one child away for 12 days sounds hard. Having two away for 12 days is REALLY hard, especially when one of them is only 11 and only a year ago couldn’t even manage a week long Scout camp.

I started waking with the feelings of panic about six weeks ago. They were going and I really, really didn’t want them to go. Selfish, I know.

On the fourth day of my son’s year 6 residential, I missed him so much I couldn’t bear it. I couldn’t eat my breakfast. I felt wobbly. And then I thought ‘This is only five days. Soon he will be gone for 12 days. And his brother will be gone too.’ And then I felt even worse. How would I get through it?

I never once told them I didn’t want them to go or showed them that I was sad or worried about it. It’s a great opportunity for them and I would never want to hold them back.

But it’s so hard.

I started to feel a bit better about it after my son’s year 6 residential, which he loved so much he said he could easily have stayed another two weeks. I wanted to feel reassured by their practice Scout camp three weeks before the big camp, but they didn’t come back buzzing like I’d hoped. They came home a bit grumpy, after just two nights away. Then my son got so down about leaving primary school that it scared me. I’d never seen him like that and I was afraid of him being depressed while he’s away.

But he’s got his brother there, who won’t look after him every second of the day, but he’ll keep an eye on him. He’ll know if he’s eating and sleeping or if he’s feeling down. He’s also got one of his best friends from school there. The two of them are quite an emotional pair. They are caring and understanding. They will know if the other is down and will look after them until they feel better. They’re sharing a tent and have booked all of the same activities, so they will be there for each other 24/7.

All I want is for my boys to be happy. Missing them is my problem and I will just have to get over it. But not knowing if they are happy is hard. Knowing that I can’t run to them and bring them home and make it all better if they feel sad about anything. In the scheme of things, 12 days is nothing. A drop in the ocean. But when you’re living through it, it’s an eternity.

I say all I want is for them to be happy, but then there’s the worse bit, the bit I can’t even bear to think about. Because happiness isn’t all I want. It’s actually third on the list. All I want is for them to come home alive. After that, I want them to come home uninjured and well. Happiness comes below that. Happiness can be mended. Some things can’t.

Sometimes I have to have a word with myself. Remind myself they are coming home. And soon. Remind myself that some parents are separated and don’t see their kids regularly. They have to send their kids on holiday with an ex-partner they don’t even like. Some parents have to send their kids to boarding schools. I’ve just sent my two boys on a 12 day Scout camp to Holland. A camp they really wanted to go on. It was entirely their decision.

They will be home soon. With their noise and their mess and their arguments. They will have rucksacks full of dirty clothes and tales of the all the fun and exciting things they’ve done.

I an’t wait to see them. 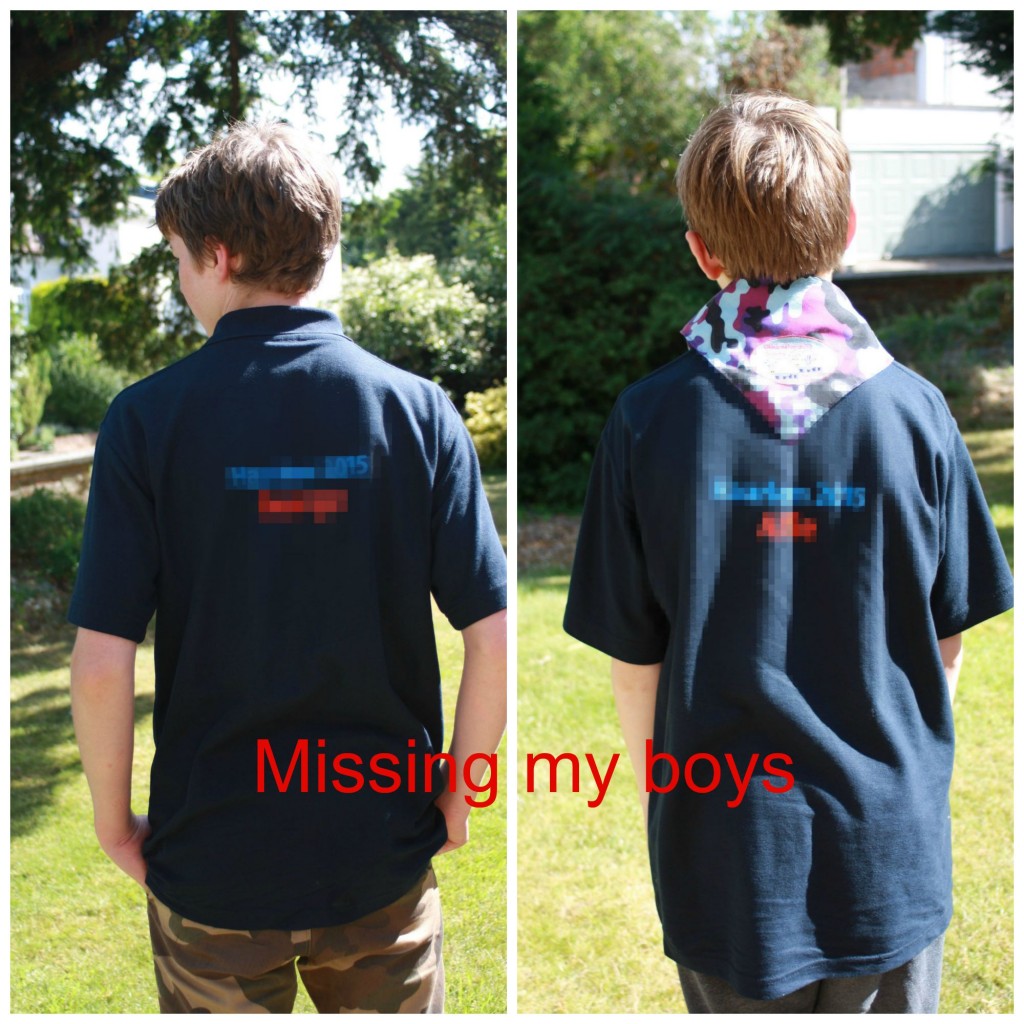