As we pulled into the drive after ballet, he was there.

We’re not big animal-lovers in our house, but I try to keep the kids interested in them and not afraid of them.

We’d never seen him before. He was black and fluffy, with patches of white.

My daughter went to talk to him and he followed her to the door. We could see his shape through the glass.

My eldest loves animals, my younger son, not so much. But he loves cats.

‘He’s rolling on the grass!’ shouted my daughter, excitedly.

And she didn’t just mean the cat. Her biggest brother was rolling too.

There was a lost cat poster the kids had spotted in the village. They thought they’d better go and check it. The next thing I knew, I could hear Grandma’s voice. If anything happens at all in our house – good, bad or unusual, my mum is straight round. The kids had dragged her round to see the cat. And it wasn’t the cat on the poster.

By now, my younger son was out stroking him and talking to him.

‘They’re the only animals he likes.’

It was time for Scouts.

We could see his shape through the glass in the door and we could hear him meowing. Loudly.

I felt sorry for him. I could feel my resolve crumbling. My head was saying ‘don’t feed him’, my heart was saying ‘feed him’. My mind was running away with me. Maybe we could keep him if he was lost?

But I stayed strong.

My daughter cried. She hated that he was lost and couldn’t find his way home. She was worried that he would starve.

I told her cats are hunters, that he would find food.

So why was he still crying outside our front door?

He’d been there for over two hours.

It had gone quiet.

We couldn’t see the big, fluffy cat any more.

And then the boys came home.

‘Where’s the cat gone? Shall we go and find him? Can we get a cat? I love cats!’ 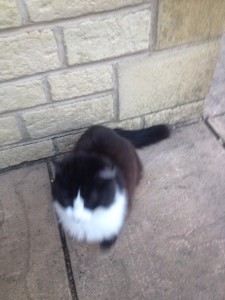 This is the worst photo ever. My son took it on his phone.

Linking up with The Gallery at Sticky Fingers. Pop over to see how others have interpreted the theme ‘animal’.