The school tag rugby tournament is one of my favourite school events of the year. I feel very lucky that my son has played it in every year since year 3. As rugby isn’t a big thing for their school, he was actually the best player in the team even in year 4. They usually field a team of year 3s to 6s, most of whom have never played rugby before and come somewhere very near the bottom.

This year they did something different. And very sensible, in my view, but a first for our school. They played to win.

There are actually five boys in my son’s year who play rugby, which has not been the case in previous years. This year, they played with only year 5s and 6s (which makes me extra grateful my son got to play in year 3 and 4) and had a strong team and a not-so-strong team. So all of those rugby playing year 6s were in the same team, along with two year 6 girls (the rules of the tournament state they have to have girls in the team) and one very sporty year 6 boy. The other team, actually called team 2 (generally they don’t like to acknowledge such a thing as a ‘team 2’ or weaker team) was made up of year 5s and the year 6s who don’t play rugby.

Usually, they’re getting thrashed. I always like to see my son shining and being loads better than the rest of the team, but there’s not a great pleasure in being thrashed, even if your son does score a couple of amazing solo tries.

This year, they played as a team. A strong team.

They won their first game 7-4, with my son scoring two tries (see, he can still score even when the team is strong!). They won their second game 4-2 and their third game 6-1. My son scored an amazing try in the third game, running the entire length of the pitch. They won their final group game 4-2, with another two good tries for my son. Those results meant they’d won their group. 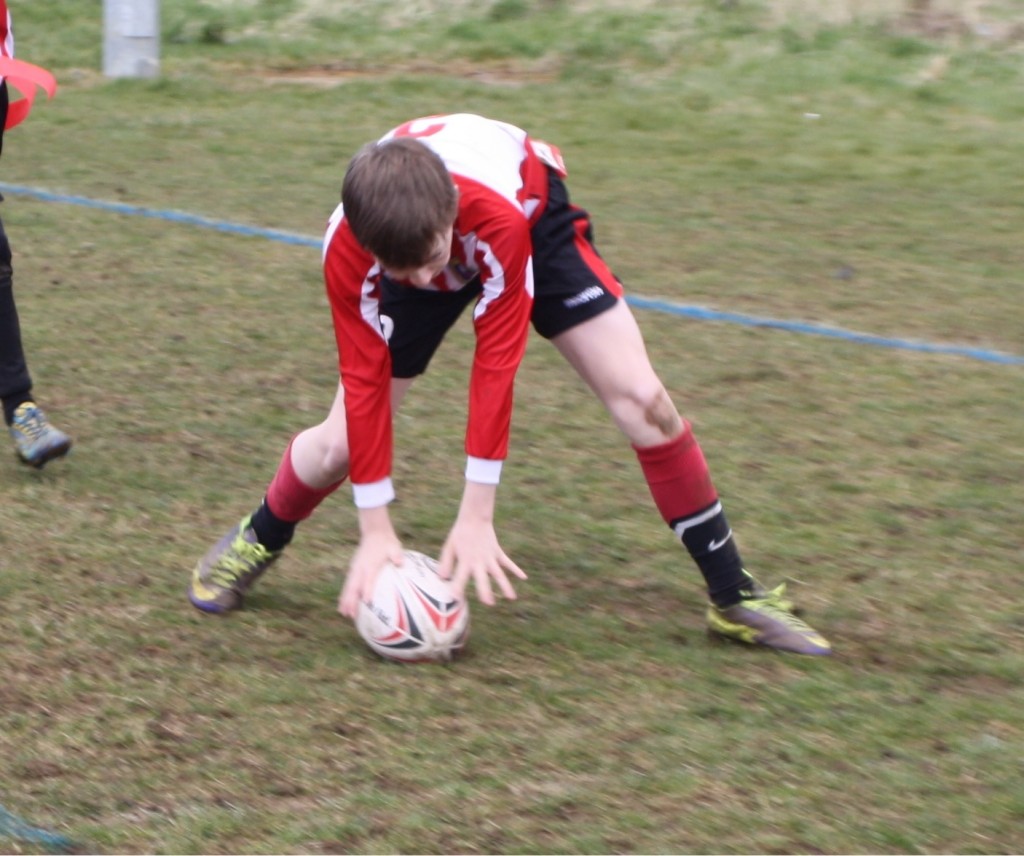 The great thing about this tournament of 42 (!) primary school teams, is that nobody gets knocked out. After lunch, they are put into groups of teams of a similar ability. All the teams that won their group went into the top competition with the other group winners. All the teams who came third went in a group with the others who came third etc etc. Every group was playing a knock-out competition to find the eventual winner of that group (cup, plate, shield, trophy, bowl… ).

When we played the top teams, things didn’t go so well. They lost their first two games, which meant they had gone from quarter finals to playing for 5th or 6th to playing for 7th or 8th (I think – it is a bit like rocket science). They won their final game of the day 3-1, with my son scoring yet another fantastic try. He also got knocked over (in a non-contact competition), but luckily there was no blood!

Having come 7th in the top competition, they all came away with a much-deserved medal. Seventh out of 42 teams is something to be proud of.

I was so proud of my boy, after the disappointment of the rugby tournament a few days earlier, and it was brilliant to see our school finally playing to win.