Young Voices is the biggest school choir event in the WORLD! It runs for several nights in January at each of four arenas  – in Birmingham, Sheffield, London and Manchester. A lot of primary schools take part, including ours.

My daughter took part last year and I was blown away by it. It was incredible. Before the show, all I’d thought about was the incredibly long day she would have and whether or not she would survive. But this year I knew she would survive, and she would love it, so I was really looking forward to seeing it again.

At the start of the school year, Young Voices share the words and music with all of the schools taking part and they start learning them! It’s incredible how much they have to learn. Our choir practises for an hour a week and they basically have just a term to learn the songs. The mixture of music is brilliant – there’s a pop medley of up-to-date music, songs from musicals (an Andrew Lloyd Webber medley and When I Grow Up from Matilda), a totally random medley (this year’s was food) and a lot more.

Some of the songs also have dance moves, so my daughter has been in her element perfecting those. It’s lovely to watch her – she’s turning into one of those stage school types, even doing the chirpy cockney accents where the song requires it – but without begin remotely brattish. 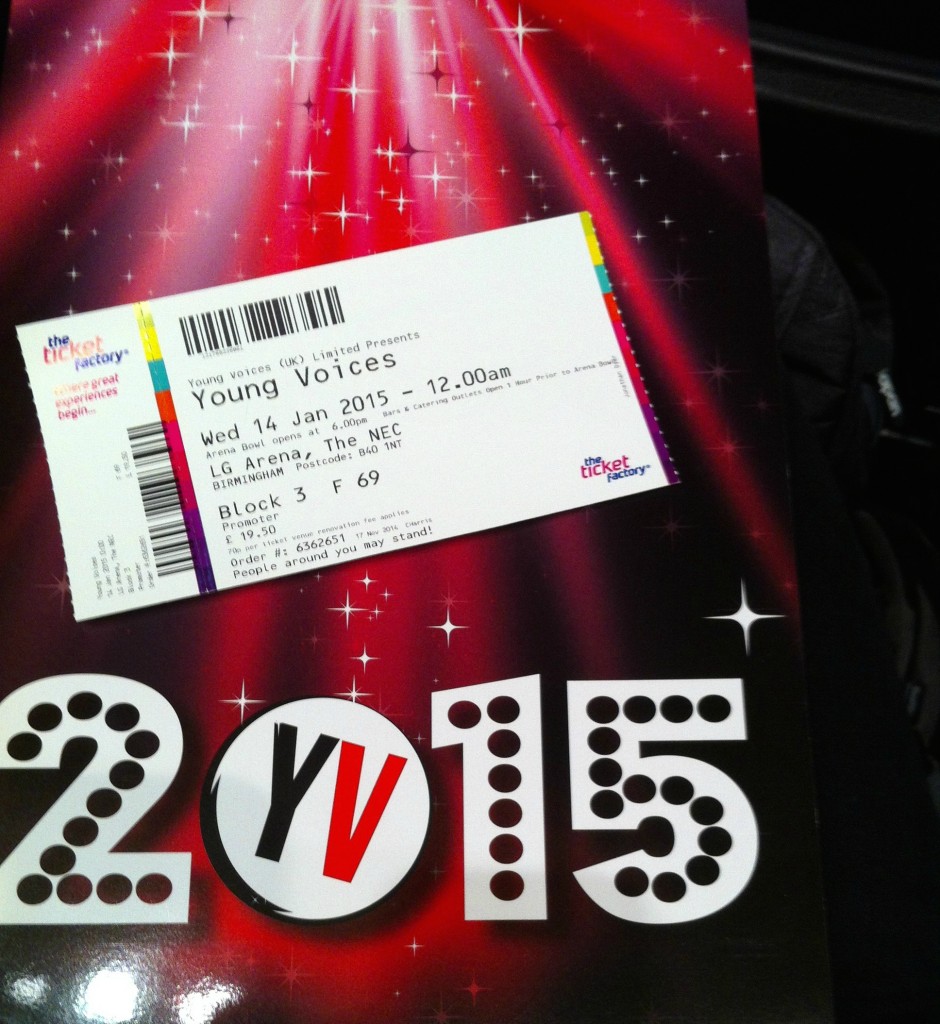 On the big day, she set off for school at 8.30 as ever, with a packed lunch, a packed tea, a lot of drinks, a dose of chocolate medicine and her travel sickness wristbands. She wouldn’t be home until 10.30pm.

Mummy and Daddy set off nice and early to watch. We knew from previous experience that the parking could be stressful and there’s quite a trek from the car park to the arena. We arrived into an arena full of shouting, screaming and excited kids (and some pretty amazing, patient teachers).

I’d forgotten that binoculars. There were 5,896 kids in that room. Theoretically our seats were supposed to be opposite the school. We scanned and squinted until our eyes hurt – looking up and down, left and right. We didn’t expect to see our daughter immediately, but we wanted to at least locate the school. It was 15 minutes before we even found the school banner, then we had to look for the kids. Strangely, I spotted a very distinctive girl from my daughter’s class. She is much taller than the others. It was 10 minutes before I realised my own daughter was sat next to her.

The concert kicked off with the Andrew Lloyd Webber medley. This was the first one my daughter had cracked – she was determined to get the colours of Joseph’s coat right and had worked hard on it. The sound was slightly dodgy for the first medley – coming through the speakers, rather than straight from the mouths of 6,000 excited kids, but they sorted it for later songs.

Young Voices isn’t just about hearing the kids sing, it’s actually a concert for them (and us) where they get to see professional singers and dancers perform. This is not something many kids would get otherwise – and it’s free for them!

A guy called Tom Billington, who seems to be a very hard-working singer/ songwriter performed Let Me Entertain You to get the kids all excited (not that they weren’t already VERY excited!). Urban Strides are a brilliant old-school street dance crew who made the kids cheer wildly every time they did a back-flip. Mic Lowry are a young, five piece male vocal harmony group. Their voices are beautiful, but the music they played was a bit slow and not quite exciting enough for the kids (or for me, if I’m honest!).

Topping the bill was Lucy Spraggan, who just happens to be one of my daughter’s favourite ever XFactor contestants (she still often sings Beer Fear at home, I’m ashamed to say!). Her influences are folk, rock and hip hop, which makes her pretty perfect for me, never mind the kids! She sang her own singles, which reminded me a lot of the Levellers (always a very good thing) and the kids joined in on backing vocals. The sound was incredible and what a thing for them to be able to say ‘Oh yeah, I did backing vocals for Lucy Spraggan’. 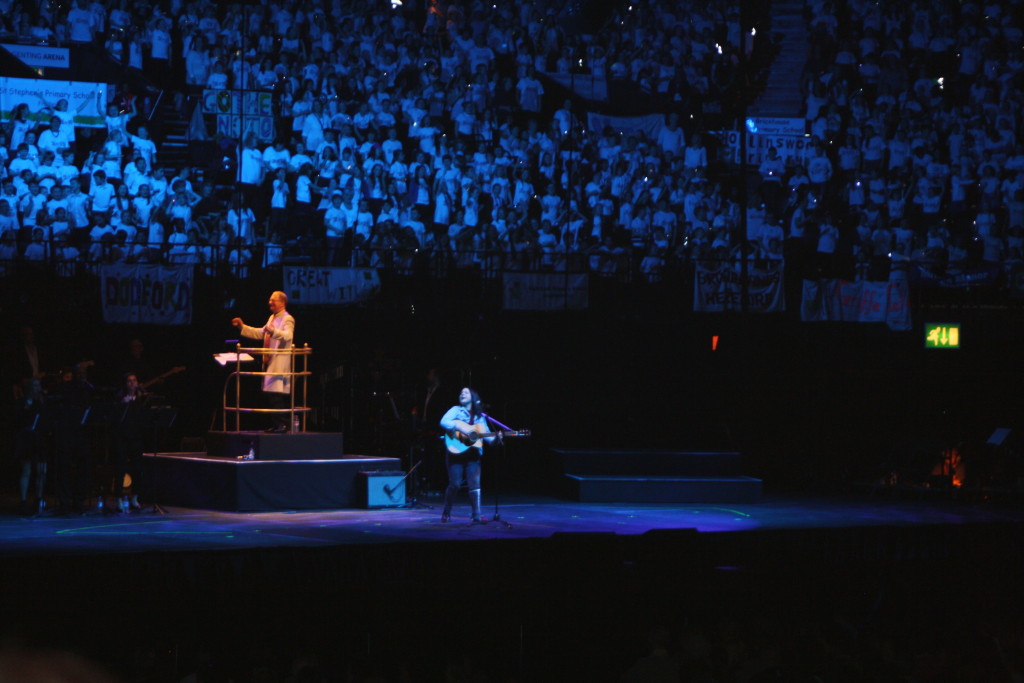 Singing with Lucy Spraggan, as you do

I’m in awe of the thought that goes into the musical choices for Young Voices. The Mandela tribute medley was beautiful, despite containing a lot of unfamiliar words and being hard for the kids to sing for the kids. I was particularly pleased as it included two tracks by Jonny Clegg, a singer I was into when I was a teenager. It was a nice touch that the lighting for the medley was in ANC colours.

Once I’d spotted my daughter, all that distance away, I didn’t lose her, although I had to strain my eyes to see her. The light glinting off her glasses helped. And, even from that distance, I could see how good her dance moves were – bigger, sharper and cleaner than the other kids. And in time.

The choreographer came on stage to get the parents jumping around with some dance moves to 80s songs we’d all know. This would be the bit where my daughter would have been dying inside as she’d warned us we weren’t to sing or dance. But everyone was singing and dancing. And she couldn’t see us anyway!

After Lucy Spraggan had ticked the ‘sounds a bit like the Levellers‘ box for me, Tom Billington came on and did Radio Gaga, which ticked the Queen box for me (Queen and the Levellers being my two big musical obsessions). Not that many people did ‘the arms’, but I did. Nobody was going to stop me. Not even my daughter who would have been looking daggers at me if she’d known.

The show finished off with the kids’ favourite, the Pop Medley, which included Happy and Rather Be. Unsurprisingly, they sang a lot louder than they had on the rather challenging Latin songs.

It was another brilliant show and we headed home in the rain as very proud parents. My daughter was buzzing when she got home and rightly so! I can’t wait for next year.

If your kids’ school does Young Voices, encourage your kids to take part – it really is an incredible experience they, and you, will remember forever.