Until my daughter joined year 3 and the school choir, Young Voices was something I’d only heard of in passing from my boys. They were both jealous and in awe of it – because kids who took part got home at MIDNIGHT and were allowed the next morning off school.

But then my daughter started singing. I heard the Family Film Medley and the Pop Medley, I heard Mr Blue Sky and All the Thinks You Can Think. The choir started learning these songs way back in September, all working up to Young Voices at the NEC this week.

Young Voices is the biggest schools’ choir event in the world, and takes place at four big venues over a number of nights, each with THOUSANDS of kids taking part. It is a big and exciting deal. 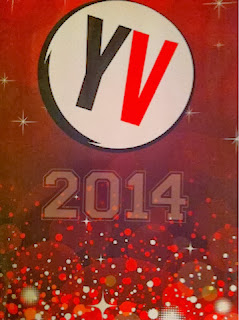 I must admit I was slightly sceptical, concerned even. My baby girl would go to school as usual in the morning, eat lunch, then get a coach to Birmingham for 2pm, rehearse all afternoon and perform at 7pm, getting home between 10.30 and 11 (midnight of course being an exaggeration by the boys). It seemed an awful lot for a 7 year old, especially one given to travel sickness.

But she was excited and she kept on singing. They were rehearsing hard at school and she was a little worried they didn’t know some of the songs as well as as others. I still really know what it was all about. I knew they’d learned a lot of songs, but how could it go on that long with just kids singing?

Well, it was spectacular and much more than just kids singing! I’m so glad I went.

The arena is half filled with primary school kids, all wearing identical Young Voices Tshirts. The rest of the arena is filled with parents. The organisers arranged the seating so parents are sat opposite their own school. But they are so far away! I’m so grateful to the mum (hello, you know who you are!) who pointed out where my daughter was. Although I couldn’t make out her face, I recognised her movements.

The show opened with a dance crew, a street crew, but with a bit of a ballet edge. Just my daughter’s cup of tea. I felt myself welling up knowing just how much she would love watching it.

Then they started singing – The Addams Family, Chitty Chitty Bang Bang, Supercalafragilistic (I probably spelt that wrong). The Family Film Medley! After all those months of hearing my daughter singing snippets of it, it was magical to hear thousands of children singing it. When they got to If I Was a Rich Man, the volume went through the roof. The kids love this one – because it contains the word ‘bum’. Not in the bum context, just in a nonsense context: ‘All day long, I’d biddy biddy bum… ‘ That is VERY funny if you’re 7. Or 10.

The concert had only just started and I was in bits. Properly emotional. It was just so beautiful.

The kids’ songs were interspersed with performances from the dance crew and singers Wayne Ellington, Keith Semple and Stacey Solomon! The volume of thousands of kids cheering at Stacey Solomon is quite incredible. And how bizarre to hear her talking in real life when you’re so used to hearing her unique voice on telly.

The songs were accompanied by simple dance moves. Now my daughter will never do a dance move anything less than 100% perfectly. She was a tiny dot in the distance. I couldn’t see her face, her glasses or her hair, but I would know those arm movements anywhere! I could just tell how much she was enjoying it. Singing and dancing herself, plus watching singers and dancers on stage. For my daughter, it doesn’t get any better than that. I knew I never should have worried about the long day and the coach journey. She literally couldn’t be happier.

After a very rousing performance of Livin’ On a Prayer (which the mums and dads joined in with VERY enthusiastically), the show closed with my daughter’s other favourite – the Pop Medley. One Direction, Taylor Swift, Olly Murs, Labrinth… The kids sang their hearts out and the parents almost burst with pride.

If your child ever gets the chance to take part in Young Voices, tell them to go for it! 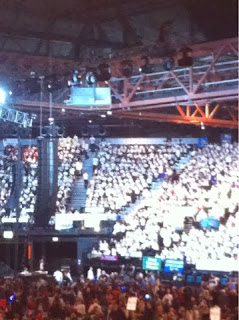 My girl is in there somewhere!