The last time we played them, just a few weeks ago, we should have thrashed them. But we didn’t. Holidays and illness, including my own son’s, put paid to that. We should have had nine players on the pitch, but we could only field eight. They were understandably unwilling to reduce their own player numbers or postpone the game, seeing the chance of grabbing some valuable points. They were bottom of the table, we were in the top half. The whole league was shocked by the result. They’d got their only win of the season.

I really hoped they would. Something like a 3-0 would be nice. Our previous best result was 10-4. We had yet to get a clean sheet all season.

It wasn’t long before the first goal went in – and it was my son’s! An incredible curling effort, which looked like a cross, but was actually a perfectly aimed shot on goal.

Minutes later, another goal went in.

My husband, the coach, weakened the team. Already?! But we were only 2-0 up and only 11 minutes played. There was still a long way to go. It’s very easy to lose a 2-0 lead in under 11s football.

But, before we knew it, were were 3-0 up. Then four. I like to ‘live tweet’ the goals as they go in on a Saturday morning. They were going in faster than I could tweet them.

We were running rings round them, even with our weakened side.

Before half time, four of the five best players were on the bench (aka sat under a tree in the sun). It was great for the other players to get so much time on the pitch – and it wasn’t stopping us from scoring.

At 6-0, and still before half-time, one of their players walked off the pitch in tears. I felt his pain. We’ve  been there before. It’s hard being so far behind, hard feeling you’re letting your team down and that the ref isn’t on your side. (It’s funny how it always feels as though the ref isn’t on your side when you’re losing. You can forgive the ref anything when you win.)

Due to the rules about where supporters must stand ie away from the coaches who are on the other side of the pitch, all supporters have to stand on the same side of the pitch, which meant my daughter and I were surrounded by the other team’s parents. Their emotions were both tangible and audible. But, although I felt for them, I wasn’t going to stop cheering on my son’s team!

It was 7-0 at half-time. My son and the other three strong players remained under the tree for the start of the second half. We missed a penalty, but then scored from a corner seconds later to make it 8-0.

Then my son and the others were back on the pitch. My son got hold of the ball, ran halfway up the pitch and chipped the keeper to make it 9-0.

Then the milestone. 10-0. TEN-NIL. Unbelievable. 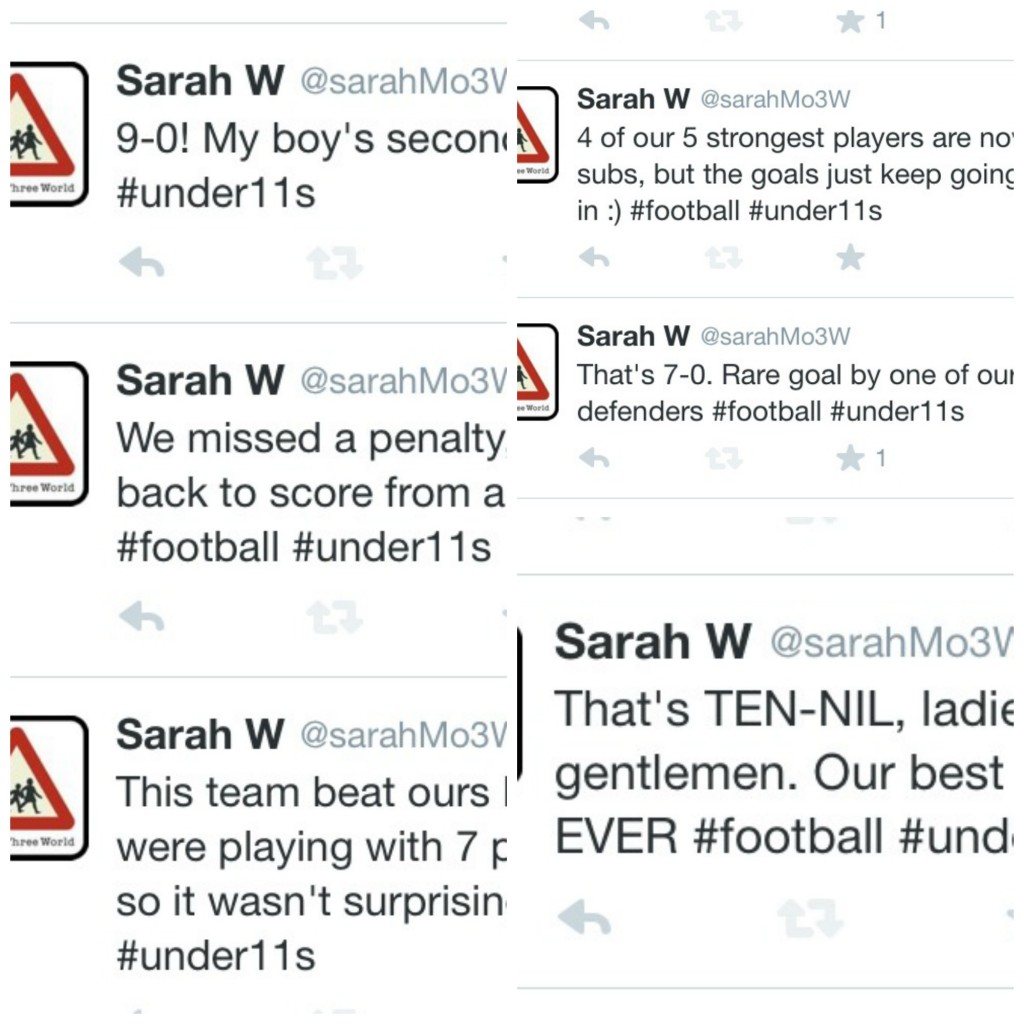 But it didn’t stop there.

Our defence was getting a little sloppy. The opposition were getting closer to our goal. Several times they had a shot on an open goal, but every time it went wide. A consolation goal for them wouldn’t have been such a bad thing – I know in their position it would have given us a small morale boost – but we were greedy, we wanted that clean sheet.

The eleventh went in and, seemingly seconds later, so did the twelfth.

TWELVE-NIL. Our biggest league win, not only of the season, but ever. And our only clean sheet of the season. Two goals for five players and one each for another two players. Every player, even those who usually spend most of their times as subs, played a part in that victory. Even when they were so far ahead, they never stopped playing and trying to score more.

It really was a brilliant victory. I was so proud of my son and his team.