My eldest has had a string of obsessions since the age of about 8 or 9 – he went from collecting fossils (that was an obsession I really liked), to old coins, to Olympic memorabilia, to fishing. His latest incarnation is as a film buff. He has discovered the delights of CEX – the secondhand shop selling games, electronic equipment and, best of all, DVDs – priced from about 25p.

After an initial interest in horror films and things he was forbidden to watch (definitely no 18s!), he has become quite the film connoisseur in recent weeks. As well as films which are a little bit crap, to say the least, he is working his way through some real classics.

He’s taken to asking me things like: ‘Have you seen Schindler’s List/ Forrest Gump/ Pulp Fiction?’ Yes, yes and and yes! I am not a complete novice in the world of films. These are films from my day and I loved them all. In my younger years I used to go to the cinema a lot and there are very few big or classic films from the 90s I haven’t seen. It’s hard for teenagers to imagine that you had a life before them and that, shock horror, you might have actually been quite similar to them.

It’s remarkable how many secondhand DVDs you can buy with £4 pocket money a week, plus the odd bit of leftover Christmas money. When he comes out of the shop with a big pile of them, you assume they will last him a few weeks. But they won’t, because he just sits and watches them and watches them and watches them some more. He can easily watch one film on a school day and two on weekend days (he would watch three or four if we would let him).

He sits in his bedroom on his own to watch, which I feel a bit sad about. He watches a lot of 15s, so they are neither suitable for, nor interesting to, his brother and sister. I think he likes doing something they can’t get involved in. At the weekend, Daddy will usually join him to watch a film.

It seems that the hold the Xbox has had on our family for the last year is now over. My younger son plays on his own now. His brother doesn’t want to play any more, he’d rather watch films. There are many, many things I dislike about the Xbox, but the one thing I did like about it is that it was something my boys did together.

There are worse things to do than watching films. You can learn a lot about the world from watching them – and you can definitely learn a lot of about films, which is quite a good thing in itself. While he’s sat in his room, he’s not coming to any harm or harming anyone else, which are always two of the biggest causes for concern as a parent to teenagers. He keeps his door open so, even though we don’t watch with him, we’re not banned from entering the room. But I still feel like the obsession has gone a bit too far.

I hope that when the weather improves and the days get longer and lighter, he cuts back on the films and starts getting out in the fresh air and spending more time with his family again.

Do your kids have a major DVD habit? Do you try to limit it? And, if so, how? 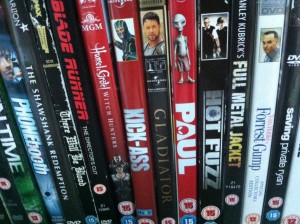