Well this is it. After nine previous novels, six of which I’ve read this year (and reviewed on this here blog), I’ve finally made it to the end of the Harry Hole series by Jo Nesbo. Police is the 10th book in the series and only recently published. It is the last book, but I’m hoping it’s not the final one.

The story follows on from the dramatic events of Phantom. A patient lies in a coma in hospital, guarded by police at all times. It’s not clear if he will pull through, but the powers that be want him dead. Not so far away, police officers are being murdered at the scenes of unsolved crimes they’ve worked on. The murders are particularly brutal and sadistic and are becoming more frequent. The police need Harry Hole to help them solve the murders, but this time he really can’t help.

This is a brilliant book, and possibly one of the most gruesome to date. There are twists and turns as ever – the police suspect various people, the eagle-eyed reader (me!) thinks she can spot a couple of other suspects. But she gets it wrong again. No matter how many of these books I read, I’m never going to work out the killer, because Nesbo is just too damn good at hiding them.

Nesbo uses his classic device of referring to ‘he’ and not naming people to keep the mystery alive – the murderer, the victim, an innocent bystander, one of the police officers?

A final twist at the end had me in proper tears. You don’t expect that from a crime novel.

This is a great read for Harry Hole fans, but also for anyone who enjoys a real page turner. If this is the final book in the series, it’s a great ending. And if it isn’t? That’s all good, because I can’t get enough of these novels. 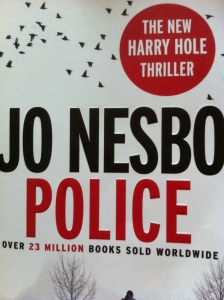