On approximately 15th December, my daughter suddenly said: ‘I haven’t decided what I want for Christmas yet!’.

With her brothers clearly not believing in Father Christmas any more and her wavering a bit (or maybe she doesn’t even believe, who knows?), I hadn’t enforced the rule of writing a letter to Father Christmas this year. So she felt like she hadn’t asked for anything.

I reminded her of the things for bedroom and the boots she’d asked for. But she was wise to me – she’d asked her grandparents and auntie for those, she hadn’t told Father Christmas what she wanted. I assured her it was fine, because Father Christmas is good at surprises.

For two or three months I’d been listening carefully and noting down anything she’d ever shown an interest in while shopping or had mentioned in passing, and I’d also thought about things she might need or like. I thought that Father Christmas had done a pretty good job.

As a dancer, she has always worn the dance school uniform, but as girls get older, they tend to express themselves more through what they wear and they like to look individual rather than the same as everyone else. She had mentioned Pineapple dancewear once or twice in passing, so I decided to get her a top and trousers. The top is the sort of thing I would be horrified about her wearing in ‘real life’ as it’s off-the-shoulder. But dance isn’t ‘real life’, there are different rules (because where else would wearing something resembling a swimming costume be acceptable other than a dance class?!). As a bonus, even though it’s clearly for street dance, it also has the words ‘ballet’ and ‘tap’ on it. My daughter and I are proud that she does the classical dance styles as well as the cool stuff, so it was perfect for her.

As I was shopping the Next sale online the other day, I’d stumbled across some Pineapple dance trousers.

‘Can you get those?’

‘Have you added those trousers yet?’ etc etc etc.

I told her I would do it ‘in a minute’ and she watched me like a hawk. Why wasn’t I adding the dance trousers? Because I knew there was a pair all wrapped up ready for Christmas morning, of course!

She loves her onesies, but had mentioned that she would like some of the more traditional button-up pyjamas in the warm, brushed material. They weren’t particularly cheap in Next (our shop of choice for most clothes), so I decided I might as well pay just a little bit more and get her some more special ones from Cath Kidston. And I found the perfect pair! They were blue and covered in London buses (of course they were for boys, but neither of us bothers about this sort of stuff) and, most importantly, matched my handbag perfectly.

‘I think this is your bag, Mummy! What is it? It looks like your bag!’

It took here a while to work out what they were, but she was thrilled with them. They ticked not one, but two boxes – the perfect pyjamas and they matched something which she identifies as being ‘Mummy’.

A few weeks ago, our dance school had a photo session. I wasn’t sure what it was all about, but I booked my daughter in. I thought it was a possibility for nice presents for the grandparents, as well as ourselves of course! What we ended up with was some really beautiful images of my daughter dancing, including one very striking one of her in a green leotard with her leg stretched up high. I got the copies for the grandparents and ourselves, but I thought she might like one for herself too. We’d never had any images on canvas before and my daughter was unaware they exist, so I got her a canvas. She absolutely loved it. She really had no idea it was a simple thing to do. To her, to see her amazing photo like that, was quite magical.

My daughter has been playing violin for over a year. She practices sat on the floor with her music, but I thought it was time she had a music stand. She was so excited by it!

I don’t go mad spending money on my kids, I don’t go over the top with beautiful wrapping, but my daughter loved her presents. She gasped as she opened every one. She couldn’t believe Father Christmas had found her presents which were so perfect – and without her even asking. She showed them all to Daddy in disbelief – her amazing photo made big, pyjamas to match Mummy’s bag, a music stand and amazing dancewear. How did Father Christmas get such good presents?

To her, they were the perfect presents.

It was lovely to see just how much she valued them and appreciated them. She doesn’t know for sure that Mummy sorts the presents, but I don’t need her to know that just yet. I’m just happy that she loved them so much. 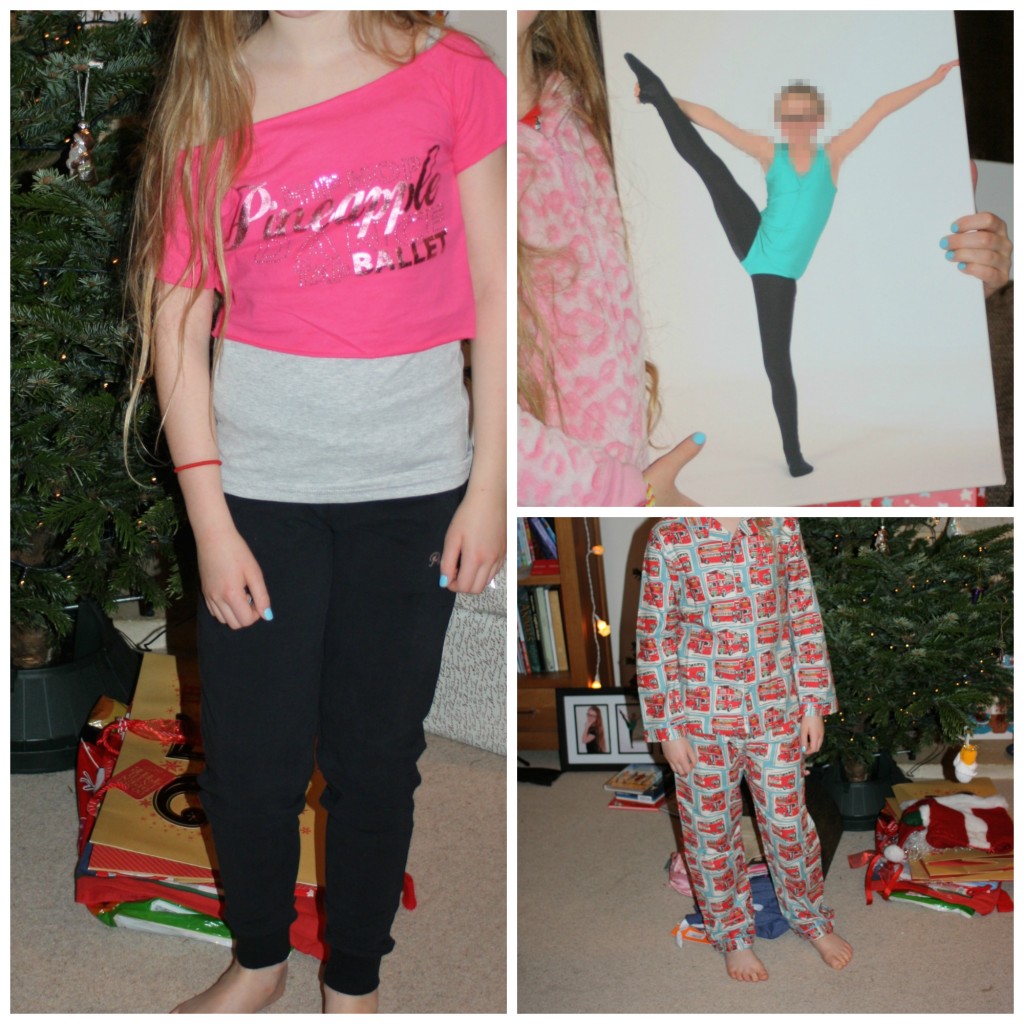