The Memory Book by Rowan Coleman

This is a book I never intended to read. Long story short, I was at Paddington, my reading material was quickly running out and the books were on buy one get one half price. So I bought two! Both of them were books I would never have considered had I not been in that situation.

The other book was Before I go to sleep and I read them one after the other. It’s remarkable how many similarities there were, although one is a crime thriller and this is more your standard women’s fiction. They are both about woman who have lost their memories and are struggling to make sense of their lives, in both of them a diary plays a key part and they both even feature encounters with strange men in coffee shops.

This is, without doubt, chick-lit. It is good chick-lit, way superior to your ’27 year old PR girl meets unsuitable man, has heart broken, falls in love with geeky best friend, lives happily ever after’ scenario, but it is still chick-lit. It is moving (I’ll admit it had me in tears a number of times) and seems to be well-researched, or based on real life experiences.

I read this book very quickly. There is something very beautiful about the relationship between all the women in the book. Claire, the central character, is only 39. She is becoming a danger to herself, so is being cared for by her own mother and her grown up daughter, as well as her husband. Her greatest ally becomes her 3 year old daughter as together they try to rebel against stairgates and locked doors.

The story is told through the eyes of the different characters and through the ‘memory book’ of the title, in which the characters record special memories from the past to help Claire remember her life.

I didn’t expect to like this book as much as I did, but I found it to be a very enjoyable and moving read. It comes highly recommended! 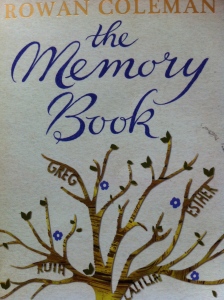