Before I go to sleep by S J Watson

I’ll be honest, this was never a book I intended to read. I was vaguely aware the film was out and it sounded like a fairly interesting premise, but not interesting enough for me to rush to read the book. But then I was at Paddington station with a book that was running out way too fast. There’s nothing worse than being stuck on a train without a book, so I needed to buy a new one – and this sounded the most interesting of the 30 books available.

Christine wakes up every single day and deosn’t know who she is, where she is or who her husband is. She has lost her memory and every day is like starting again. But with the help of a doctor, she starts piecing her life together. Needless to say, everything is not quite as it seems.

It’s an interesting idea and it certainly kept me turning the pages. It’s just a shame that the back of the book said ‘And the one person you trust may only be telling you half the story’ because that takes a whole lump of mystery out of the situation. Yes, there’s a bit of a twist, but not half as big as if they hadn’t decided to print that on the back.

While an enjoyable and at times scary read, I just found the whole thing a little bit too implausible. The book is narrated by Christine, who doesn’t know who she is, yet still knows the name of everything around her – from toast to dressing table to satchel to gummed paper. Gummed paper?! It’s not the sort of thing I would imagine would spring immediately to mind if you’d lost your memory. And how does she know how to use a phrase like ‘blandly middle class’ when she has no memory?!

This book won ‘Crime Thriller of the Year’, but in my humble opinion is not even in the same ballpark as Jo Nesbo. Now that man really can write a crime thriller (as I may have mentioned before). 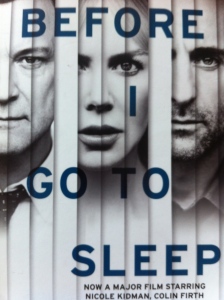