Pride comes before a fall

They say that pride comes before a fall. So with all the fit-to-burst pride I’ve had for my son lately, with being made head boy and passing the grammar school entrance exam, there was bound to be a fall.

My son loves football, and he’s pretty good at it. He’s always played in defence, more because there was nobody else capable than because he actually wanted to, but this season he has moved up to midfield and has even played up front a couple of times. He’s loving it and is doing really well – he’s the third top scorer in his league!

So it was no great surprise that he got picked for the school team. Although it wasn’t great that he was put on the left wing, as he’s not left-footed and has never played in that position before. We watched the first game – it wasn’t good and they got soundly beaten. My son didn’t play his best on the left, but he wasn’t the worst player on the pitch. We watched the second game, in which the team played a bit better. My son was on the left wing again and spent more time than anyone would have liked on the sidelines as a sub. 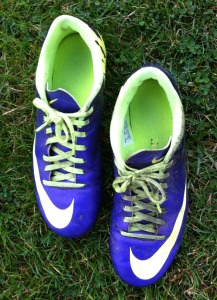 Then he wasn’t picked for the third game. We don’t know why. But they lost 14-0 without him.

As it happens, I’d booked him a doctor’s appointment for that day – not knowing that there was a football match and having already rearranged it once to accommodate the previous match. With three kids and lots of activities to juggle, it’s not easy to book doctor’s appointments and I did my best to find a convenient time. He’d had these strange lumps on his legs for months and I kept forgetting about them. And then you think ‘Oh no, what if they’re cancer and I’ve just been ignoring them for all these months?’. Melodramatic? Maybe. But I’m sure we all do it.

He had to miss football training, but I did the right thing. I wrote a note. Which is what you’re supposed to do if you miss a club. And what most people don’t do. But as it happens there wasn’t training. There was a match. A match he hadn’t been picked for. And three days later there was a tournament. Which he also wasn’t picked for. In his head, it was because I’d booked him a doctor’s appointment.

I knew nothing of the tournament. Then on the way home he mentioned it casually. And he mentioned it again. I could hear the hurt and anger building in his voice. He was talking faster and higher. He was becoming less rational. He was struggling to hold it together. He’d obviously been keeping himself in check all day at school, trying to suppress it all, and now it was coming out. The feelings of rejection, of thinking he’s not good enough, of not knowing why he’s not good enough, the blame for the damn doctor’s appointment, wondering why others had been picked. He was losing it.

He made it through the door just before he lost it completely. He ran upstairs and shut himself in his room. He was inconsolable. He wouldn’t let anyone in, wouldn’t speak to anyone. We could just hear him wailing and banging around. He was in bits. He was in so much pain. He just couldn’t understand it. He loves football so much. He knows he’s good. He didn’t understand why he hadn’t been picked because nobody had bothered to tell him. And it hurt him. It hurt him so badly.

I’m not exaggerating when I say it took a whole weekend to recover. Although winning a league game with his club team, including scoring two goals and being man of the match, certainly helped.

He wasn’t well last week. He had a really nasty cough and bad throat that was keeping him awake until 11.30. He looked pale, his eyes were dark and sunken and he couldn’t stop coughing. I was in two minds whether to send him to school. But he went. And one thing I knew was, however ill he was, he had to go to football training if he was ever to get back on the team.

Then he did the worst possible thing. HE FORGOT HIS KIT. He knows what a stupid mistake this was. So he’d missed training two consecutive weeks – one with a valid reason and one without. He told the teacher he’d forgotten it, but, having already been dropped twice, you can guess what happened next.

Another team was picked. There was a year 4 in the A team. And my son, genuinely among the top two or three players in the school, hadn’t been picked at all. Just five days since the last meltdown, it happened again. He started telling me quietly. His voice got louder, his words more urgent. I could hear the tears in his voice as he spoke. He was in floods before he’d even made it to the front door.

He ran upstairs and chucked stuff around. I heard him wailing. I found him lying on the floor by the radiator.

And I thought, if those teachers could see him now. If they knew just how much this meant to him and what it has done to him, would they care?

Competition, rejection, it’s all part of growing up, blah blah blah. This wasn’t about being ‘fair’ and ‘giving everyone a chance’ because he was the only one who was dropped. He forgot his kit. That was a massive error, but we all make mistakes. Is it worth breaking a boy’s heart over a mistake? Had they dropped him because he was the head boy and he’d got into grammar school? Had too much good stuff happened to him already?

I will never know. But I know I never want to see my son like that again.