On being a teenager

Home » Family » On being a teenager

My 13 year old son has recently started to go to town with his friends and I’m pleased about this. He’s been ‘allowed’ to go since year 7, but never took up the opportunity. When he started secondary school, his best friend moved away to a different area, two of his friends went to grammar school and another went to a different secondary school. His school is the one kids from our primary traditionally go to, yet he was there without all of his closest friends. It took him a while to make new friends, and it wasn’t until the end of year 8 that I started to hear names I hadn’t heard before.

Going to town with your friends is a rite of passage, but, looking back on my own teenage years and my perception of teenagers as a younger adult, I realise it is one fraught with potential problems and I’m trying to convey these to my son.

The first thing I do when I drop him off in town is say: ‘Take your hood down!’. For some reason, my son insists on wearing his hood up. He’s so far removed from the hooded youths of people’s nightmares, yet he will insist on wearing his hood up. It’s not because he’s up to no good. If it’s any sort of rebellion, it’s only a rebellion against his parents who tell him to take it down. Or maybe it’s just pure naivety – he feels warm and comfortable with it up. He doesn’t understand that teenagers with hoods up are seen as A BAD THING. To an adult now, he’s not a nice middle class boy who happens to have his hood up – he’s a teenager. And teenagers are always out to cause trouble, aren’t they?

One day he came home from town all cross because CEX wouldn’t sell him some 12 DVDs without ID. My son may look 12 – he’s a fairly young looking 13 who hasn’t yet hit full-on puberty, but he certainly doesn’t look under 12. But I explained to him the difficult position the shop is in – they could face prosecution for selling DVDs to under-age kids, so they have to be over-cautious – the same as supermarkets who won’t sell alcohol to anyone who looks under 25. 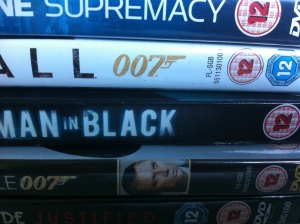 The next time he went to town, I warned him he had to be careful about how he behaved in CEX. When you’re a teenager, adults are always waiting for you to slip-up. They’re always waiting for you to misbehave. So you have to behave even better than other people do, just to prove them wrong and that not all teenagers are like that. I told him it would be very easy when he was with his friends for someone to start getting a bit cross about the DVDs and for the shop to kick them out. It’s sad, but it happens.

Shops are on their guard for the small minority of teenagers who are in there to steal things, break things, be rude to staff and intimidate other customers. The sorts of behaviour that would fill my son with horror, but which, to the outside world, he is just as capable of as any other teenager.

They survived just one small challenge of being a teenager. Sadly, there are many, many more around the corner. All waiting to catch them out on their long, slow journey to adulthood.